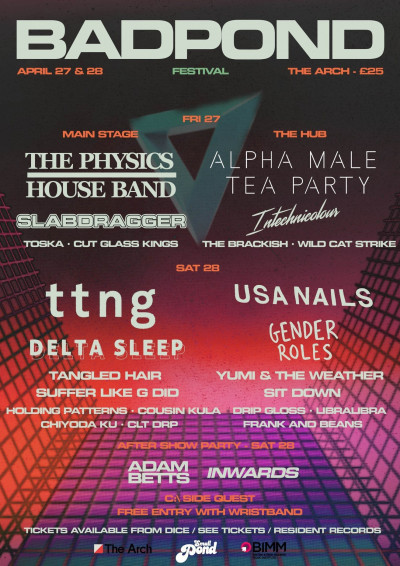 There are so many small festivals popping up all over the place, and having recently moved to London, I find myself with an abundance of choice. A weekend away in Brighton for Bad Pond, however, was a no-brainer, as the organisers had managed to pull together a fantastic bill from start to finish.

Arriving at the venue to Intechnicolour in full swing was an experience. The band plays loud, with a typical stoner rock style imposed by the sluggish, chuggy guitar parts. The singer, although drowned out towards the start of the set, starts to project wonderfully. His voice cuts across the heavily distorted guitars and brings an extra dimension to the songs. The performance is well crafted, and the crowd responded well.

I don’t listen to much music with screaming in it. It may be closed-minded of me, but it’s just not really my bag. However, I could definitely appreciate Slabdragger’s performance. The three-piece were extremely tight, happily changing between time signatures and tempos. The front man’s falsetto voice reverberated throughout the venue, while the drummer held everything together as his long hair swayed about in a mesmerising shuffle.

Where to begin with Alpha Male Tea Party? I’ve been lucky enough to support these gents a few times and put them on in Cardiff, as well as kick back as a regular punter to watch them at various gigs and festivals around the UK. Seeing them live is an experience like no other, which you must indulge in as many times as you can. They released Health in June 2017 – an album that I feel provides the listener with just a snippet of their clinical, musical proficiency, but demonstrates the band’s depth and capability to switch between outrageously riffy and subtly sombre. Go watch them and buy their music.

Last time I saw The Physics House Band was at the last ever show for the legendary Brontide. It was emotional. Their headline set at Bad Pond was as fast and furious as ever, stopping for breath only during the noisy interludes that often run through the middle of songs rather than tying them together. The relationship between the saxophone and guitars seems to be getting more mature and beneficial every time the band plays, with both parties feeding off each other’s energy. No description of The Physics House Band is complete without reference to the incredible drummer, who seems to relish every supercharged roll with an unnatural vigour and dexterity. The band will undoubtedly be one of the highlights of the Blood and Biscuits 10th Birthday gigs on the 6–7 of October in London and Leeds.

A sunny Saturday on Brighton beach was made perfect by seeing Suffer Like G Did for the first time. I’ve been chasing these guys for years, but they somehow alluded me until Bad Pond. Some beautiful detail in guitars and drums colour the songs, while each member of the band shows the individual capabilities and carefully selected intervals. The band set the mood for the day, which differs from the heaviness of Friday and centres more on melodic math.

I was like a giddy kid leading up to Tangled Hair after religiously listening to their debut, long-awaited album We Do What We Can. Similar to the situation with The Physics House Band, the last time I had seen Tangled Hair was at another send-off show for one of my all-time favourites, Tall Ships. Again, full of emotion and many collective embraces. At Bad Pond, Tangled Hair delivered their music with the mind-blowing precision and gorgeous fluidity that has become synonymous with their gigs. They also had their typical level of on-stage banter, laughing with the crowd who were choked by someone who was evidently over-enthusiastic with the smoke machine. It’s always a pleasure to catch these guys – long may it continue.

Following Tangled Hair must be incredibly difficult and a terrifying prospect, but Delta Sleep managed to pull it off with aplomb. They always bring a different flavour of math to the table, which is refreshingly honest. The band have been busy touring around Europe as well as recording their new album – the single of which, ‘El Pastour’, is superb. The highlight of the set for me is ‘Lake Sprinkle Sprankle’, and between songs I noticed the bassist from The Physics House Band stood next to me. He informed me that he was thoroughly enjoying watching his friends nail their set.

Ttng brought a wonderful weekend of music to a close. I feel like I’ve possibly seen the band more times than my own reflection in a mirror but have always enjoyed myself thoroughly: singing along with my little group of friends and some strangers while spilling expensive and tasteless beer everywhere – a trend has somehow developed during Ttng performances. The band played most of the songs from Disappointment Island, with older tracks such as ‘Chinchilla’ and ‘26 is Dancier Than 4’ delivering a beloved nostalgia to the set. Faultless to the last, Ttng have definitely grown and matured into a headline act that now feature at the vast majority of notable math festivals. Deservedly so.

Whispers went around our small group regarding attendance to the aftershow party, and I was eager to catch the talented Adam Betts lay down his frantic beats. But the depressing reality is we’re getting old, and after a quick trip to the chippy, we found ourselves heading for bed. Thanks to Bad Pond and the numerous bands for a superb weekend – I look forward to next year.