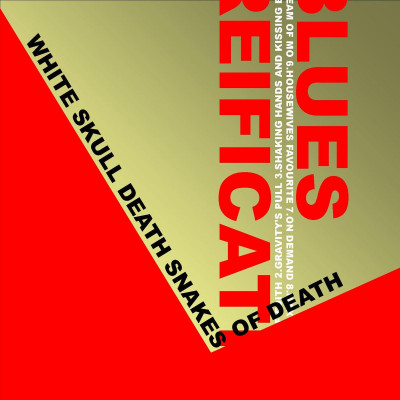 Every now and then you see/hear a band that you struggle to pigeonhole, Forward Russia, Gnod, bands that seem to have synthesised the component parts of rock in ways that are new to you or are constructing their art using slightly different resources. Somewhere near Housewives but with off kilter bits of phrasing and structure in the vocals that occasionally echoes Talking Heads Nottingham based White Skull Death Snakes of Death are not, as their name may suggest, some obscure overblown 70s metal group but a 21st Century reimagining, reconstructing of punk. Drawing on punk sensibilities but pointing it in a slightly different direction they’ve been compared to The Fall and Christian Lunch. while their vocalist Anthony Thomas cites Jello Biafra, early Black Flag, Steve Albini, Iggy Pop and Birthday Party era Nick Cave as influences.

Formed in the summer of 2013 when Anthony (vocals) and Mat (bass) Thomas joined a pre existing duo of Gareth ‘Winty’ Winterman (guitar) and Dom Goodbarn (drums) White Skull Death Snakes of Death had their first gig in December of the same year. It was late last year when I first came across them at a punk benefit gig when their set was an intense, mesmeric, wholly original shock to the system. So have they managed to reproduce that on this album?

The brief answer is ‘Completely!!’ Trying to stay as close to the live show as possible they recorded Reification Blues live with Phil Booth at JT Soar, an ex-warehouse now DIY and music space in Nottingham (1), with Mat the bassist mixing the album and Tiago Queiroz mastering it. The result is superb!

Reification Blues is a blistering album of complex angular punk that doesn’t compromise, if a successful artist is one that manages to bring into being that that they imagined-transposing the imagined into reality-then White Skull Death Snakes of Death are a successful band, this 8 track album perfectly captures them in multifaceted full flow.

The album kicks off with ‘Children of Edith’, which lyrically came about as a response to the Charlie Hebdo attack in France. It’s 4 minutes of relentless rock/punk with Anthony’s vocals demanding your attention as they become increasingly intense. If you use music as a comfort blanket don’t buy this album! Next track ‘Gravity’s Pull’ ups the tempo and the intensity. Not sure how they managed that really. Pulverising can be a bit overused but not in this context! But it isn’t that old school bludgeoning ‘Turn it all up to 11’ type power, this is music made by a band who know exactly how to achieve the effect they are after and don’t have to rely on upping the decibels. Although I’m sure they would be very happy to do that as well.

‘Shaking Hands and Kissing Babies’ savages the manipulative and dangerous machinations of some contemporary politicians as they up the nationalist ante. I’m not sure if the comment at the end ‘Another glorious mess’ is an initial frustrated response to the recording or a reference to current right wing politics-I like to think the latter. ‘The Sweet Smell of Excess’ and ‘Dream of Mo’ maintain the quality, in an alternative dance universe the latter is a huge hit.

Track 6 is ‘Housewives Favourite’, distilled musical fury while Ant takes a swipe at old school, often middle aged, lotharios. Penultimate track is ‘On Demand’, great riff, great chorus! Just great, full stop. ‘Max’ is a song worthy of the honour of being the signing off track-it has everything that I’ve mentioned earlier, clever lyrics-about the motivations and mindset of a lone bomber-Anthony’s delivery is dramatic without ever being melodramatic, the sound perfectly complimenting the vocals. Thunderous drums-did I mention the thunderous drums earlier? Sinewy guitar snaking its way through the tumultuous, brilliantly organised highly sophisticated racket. Think Gang of Four meets Idles, intelligence, musical nous and power.

You probably haven’t heard of White Skull Death Snakes of Death, you’re confused by their name, it’s got two ‘Death’s in it for one thing but you are seriously missing out if you don’t give this album a listen. And when you have I’ll see you down the front at one of their gigs in the near future!