(((O))) Interview: Colombia as it once was: Guahaihoque 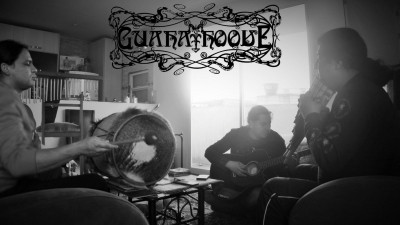 Our music is not for all kind of listeners, it´s for all those who are connected with the ancient traditions and paganism of these Andean mountains and land named nowadays as America.

Metal runs deep in the veins of South America and Colombia is no different. Though most people will know the country through its recent troubled history, there’s an ancient past in the Andean country. Guahaihoque tries to catch that in their music, and have been doing so for a good while now.

Having started in 1996, it’s been a good two decades for the band, who merge Andean folk with black metal in a very own way. Having started ahead of the folk metal boom, their sound is unique and hardly unchanged from the raw roots it stems from.

I found them willing to answer questions about Colombia, their history and music and what freedoms they currently have in their country.

E&D: How have you guys been?

Guahaihoque: Hello, yes, everything is fine.

E&D: How did Guahaihoque get started and what does the name mean?

Guahaihoque: Guahaihoque started out as an entity with the intention to evoke our ancestry. So, we formed the band with that main goal. Guahaihoque is an entity, also a god of an ancient mythology from our homeland, it´s the lord of death, the one who protects the threshold of eternity, one of its duties is to wait for the souls of the dead to guide them to the eternity, in its deep dominions in the center of his sacred lagoon.

E&D: What bands got you into this kind of music in the first place?

Guahaihoque: To be honest, we had no specific bands guiding our musical path. We don´t deny that we have been influenced so far, but perhaps most of the music that helped out to find our style is not metal, but traditional ancient music from the Andean mountains. We feel respect for so many bands, especially of the 90s, like old Ulver, Cruachan, Thyrfing, Borknagar, Falkenbach, Panthymonium, Opeth, Withered Beauty, Master’s Hammer, Arcturus, Hypnos, icons like Pink Floyd and Black Sabbath and many more. 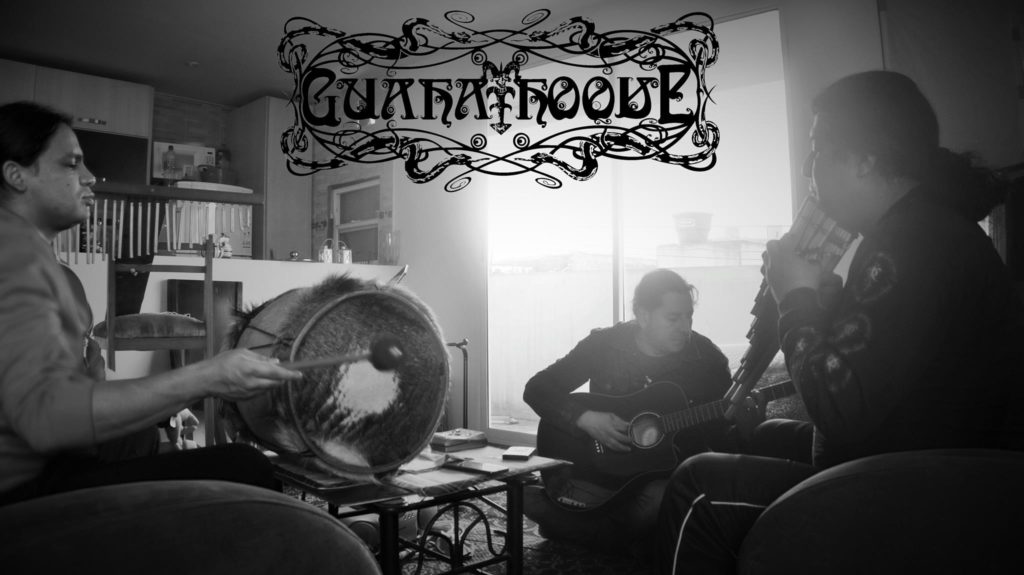 E&D: In your music, you put a lot of traditional elements. Could you tell what sorts of stories, instruments, and ideas make up the music of Guahaihoque? And of course, the cultural heritage that you try to emulate.

Guahaihoque: Our music is deeply inspired by the ancient tradition of our continent. Guahaihoque is not focused on one culture, but in many of the 3 Americas (North, Central & South). Our songs speak of myths, legends, battles, epic topics, rituals also we evoke the ancient times before the invaders came. We use woodwind instruments, such as Quena flute, Quenacho flute, Pan flutes, Tarkas, Toyos, Zampoñas, Ocarinas and others. Our intention was/is to blend extreme metal with the ancestral music of our continent, not only for intros, instrumental songs or passages but also in extreme metal parts full of chaos.

We felt the need to pay tribute to our ancestral tradition, as other bands did/do with their folklore in Europe, Asia, etc. There is a big source of inspiration because of great cultural heritage, such as Mayas, Aztecs, Incans, Muiscas, Calimas, Taironas, Moches, etc.

E&D: What sorts of instruments do you use into your music and how do you bring all of that together in a fierce metal sound? Do you start with a base of metal or with the folk parts?

Guahaihoque: As I said on in the previous question, we use several different traditional instruments, those instruments existed prior to the cultural blend when Spaniards came to our continent. The songwriting process is not planned, each song is created in a particular way, some start with acoustic instruments and woodwinds, but also with the metal formula as most bands do, it depends on the feeling and mood of each song.

E&D: How does the creative process for Guahaihoque look and could you describe this?

Guahaihoque: It starts in a natural way, we always try to do our own thing, we don´t want to be a copy band, if we feel that a riff or melody sounds similar to another band it´s changed or deleted to avoid such thing.

E&D: Are you currently working on something new? Your last record appears to be from 2007, how is it that your production is quite minimal and as I understood in the past your band has been kept on hold for a long time?

Guahaihoque: Yes, we are. Well, we are not the typical band releasing an album every year, we have no the intention to be a massive act, we make music for passion not for business. We have had several years of silence because we live in different countries, but we still working in silence and when a new material is ready, it will see the light.

E&D: You’ve been active for a long time, through some turbulent times. Can you tell me something about the scene in Colombia through the years and how the social changes affected the music/scene and its development?

Guahaihoque: The scene in Colombia is full of concerts, mainly international ones actually, most support is for those big bands, the local scene is full of bands, few small labels. Our scene is not organized or solid, every band works in an independent way. There have existed a few good acts for years, nowadays most of the bands don´t worry for making or finding it’s own sound or style, most of them are fully influenced by European or North American bands, I mean in sound and style.

E&D: Your record came out under Xue Productions. What can you tell about this label?

Guahaihoque: Xue is our own label, we decided to produce everything by ourselves because most of the offerings from labels sucked off, they only wanted to get a master recording and to release an album without giving us support, we did it because it was not fair for us, most labels only want to make money and they don’t give a fuck for the bands they are supposed to support. it´s a shame. so why not do it by ourselves?

E&D: How did metal music come to Colombia and which bands pioneered the genre in your country? What places were important for its incubation?

Guahaihoque: In past years most music came by tape-trading or some metalheads had relatives living in Europe and those sent the music to Colombia, also there a few ones promoting music through magazines, radio shows and so on, later on, the Internet was the media to make it popular and almost commercial. According to my viewpoint, there were no pioneers in Colombia, most of the bands played thrash, heavy, death and black metal and those bands didn´t do a big thing for the genre. 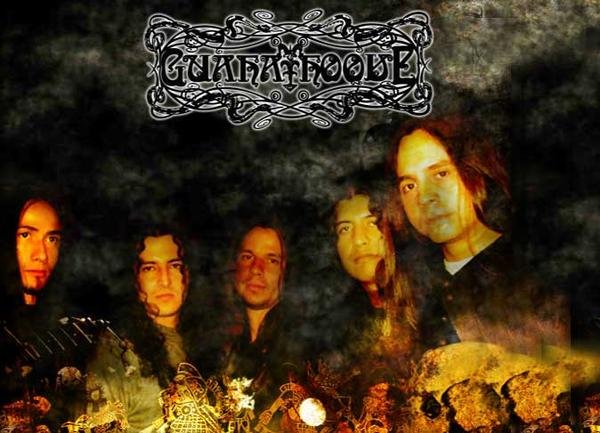 E&D: How well is everything available to you? Rehearsal spaces, recording facilities, instruments, venues to play live? From neighboring countries, I’ve learned that this can be a challenge.

Guahaihoque: Nowadays there are tons of rehearsing places with good equipment, also a lot of studios, what we don´t have are good producers or engineers, most of them are empirical and their lack of knowledge does affect the final result of so many bands work. For concerts, there are some good venues. instruments are easy to get. With the new technologies it is quite easier to record, so most bands or musicians are learning to make their own recordings and also have made own home studios. This helps a lot because you have the option to work in a free way before entering professional studios (as those are very expensive). We are doing the same in our own homestudio.

E&D: Do you face any sort of censorship or social pressure as metal musicians in Colombia? In the documentary Blackhearts, I saw that religion is very present in your country and extreme music often seems to clash with this and I wonder if that causes tension for you?

Guahaihoque: Well, metal is very strong in Colombia, most bands do their own thing, the government has no censorship, there are some festivals supported by the government. Religion is everywhere, but our constitution makes actually Colombia a secular country, so the religion has no power to control metal music in a legal way. There is no tension for us, a curious thing. We have received good response from people not into metal because of our topics and musical label (I mean style and lyrical content). We are not connected with blasphemous acts, we are not the typical “hail satan” outfit.

E&D: What current bands from Colombia should people really check out and why?

Guahaihoque: There are good bands in Colombia, like the necessary folk bands, they are worth checking because their music is good and they work in an honest way. Also such bands as Thundarkma, Apolion´s Genocide, Exgenesis, Chaquen, Endeathed, Nameless, Gutgrinder, Ignis Haereticvm among others.

E&D: I have noticed a lot of nature imagery on your Facebook page. What role does nature play in your work?

Guahaihoque: Nature has been and will always be an important thing for Guahaihoque, everything and all of us do belong to nature, the forests, highlands, sacred lagoons are a big source of inspiration, many of those places were/are sacred for our forefathers and for us too. We feel respect for our nature, including animals and sacred places. We are against destroying nature.

E&D: What future plans does Guahaihoque have?

Guahaihoque: To release new material, so we are working on it and sooner or later it will be heard for those who have supported us so far, our main goal is to create honest and sincere music instead of releasing music each year as a mainstream act. our music is not for all kind of listeners, it´s for all those who are connected with the ancient traditions and paganism of these Andean mountains and land named nowadays as America.

E&D: If you had to compare your band to a dish (type of food), what would it be and why?

Guahaihoque: I see no reason to make such comparison, but to give you a response I might say that our musical recipe isn´t the typical shit you eat at a McDonalds or KFC. We are not stating that we are the most original band, but we have always tried to work in our own way and sound. so every listener should taste it and say if it´s a good or bad dish, it´s not our thing, …our thing is to give and raise the best ingredients for it.

Thank you for the support and interview