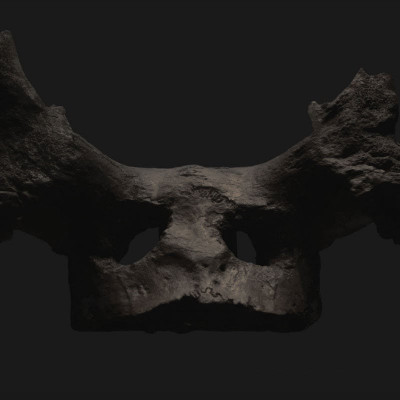 Overstatement is a failing native to the odd compulsion to write about music, nonetheless it is rare indeed to be presented with something as singular and remarkable as The Seven Oracles Of Gog Magog. This is a most peculiar set of recordings, their precise nature stubbornly resistant to clear interpretation and their provenance obscure, perhaps even purposefully occluded. Credited to The Seven Heads Of Gog Magog on the insistence of their custodian Emma Florence Bausor, who curates them superbly here with the assistance of Owd Scrat Records.

Each oracle corresponds to an artefact in the collections of Cambridge museums, through which they have been spoken. These include a deer, a horse, a mouse, a Siberian Evenki shaman and the great god Pan. They reveal a series of intense visions combining the antiquarian with the quotidian, English whimsy, world mythology, Edwardian ghost stories, Arcadian mysticism and a good deal more besides. Should you be of the inclination, and I have reason to believe you may, they offer a most curious and intriguing journey into the arcane.

It is not easy to say exactly what they sound like. Naturally there are seven tracks here, each sharply distinct from one another while cut from the same cloth. The lengthy final track is a rushing, organ powered, motorik beauty that trails thoughts of Stereolab in its wake, switching out French Marxist theory for English mysticism. Other comparisons are harder to make, it reminds me of a scrappier Pram, as if it were the work of a lost band that sat between them, Stereolab and Laika in the early days of Too Pure. Is it hauntology? Not really, the concerns evoke Ghost Box but it is both more raw and more scholarly, less washed out in the cathode glow. It’s not prog either. Although it might look it at first. The far along free music/art rock end of prog maybe. Syd Barrett features as both influence and the mythic figure of ‘the golden boy’. What it’s most like is the Art Bears’ Winter Songs which I suppose is tenuously prog, it’s certainly obscure enough.

The first oracle begins with birdsong joined by rising organ, sighs and cymbals, soft words, the mood is pastoral. The dream-trance vocal comes into clearer focus telling unexpectedly of bloody deeds “did she say they shouted ‘off with his head’ and cast his limbs asunder?” In the final third the track folds under an urgent charge of backwards drums, as if the river or time itself were reversing. We are cut free from the temporal, the bird song returns. The second is a hectic fistfight of Beefheart guitar and banshee wails. The oracles are spoke/sung largely in the same female voice and exquisitely worded. Over rhythmic cello stabs the third opens with the lines “‘You have begun wrong’ says the bus driver as I get on, sticking his bubble gum tongue out at me”. A mix evocative imagery and urgent declarations tumble about one another right across the record. Our narrator rides the bus and peruses the free newspaper remarking upon the caption to a photograph of the graveyard. “Awfully cryptic, I think to myself”. Well, quite so my dear.

What of the myths of Gog and Magog, ancient figures of apocalyptic Biblical prophesy and guardians of the city of London? In this case it would appear most relevant that to the southeast of Cambridge lies a range of chalk hills known as The Gog Magog Hills. Out here the golden boy dropped acid and communed with the ancient myths. Certainly Syd’s later putative schizophrenia might offer a way into understanding the oracles’ dense overlaid realities and talking animals, should you wish to see it that way. The recordings first surfaced a few years ago on Bausor’s blog where she lays out the nature of the oracles and attempts to unravel their tangled threads and meanings. The Blog Magog, if you will. The writings are learned but discursive, a curious blend of scholarship, whimsy and obfuscation. It is not clear Bausor is any more than a fiction herself. It often appears to be her voice on the recordings and yet she gives no indication this is the case, claiming to have received them anonymously and guessing them to be from the 70’s. She also claims to sleep in the graveyard and converse with the wildlife. At one with nature and the land of the dead. I do not believe it strictly necessary to read her writings in order to gain enjoyment from the album but they certainly deepen and enrich the experience. Should you wish to go along with her she suggests that you might, ultimately, through the use of modern technology, stand before each of the Seven Heads and listen to their numbered outpouring. Among the lesser mysteries here is why an album that is essentially accompanied by its own guide book dispenses with the practice of naming its tracks.

Among her considerations Bausor quotes Walter Benjamin on “that slow piling one on top of the other of thin, transparent layers which constitutes the most appropriate picture of the way in which the perfect narrative is revealed through the layers of a variety of retellings”. This seems to perfectly reflect what is unfolding in the oracles. Benjamin also took a dim view of the way stories are undone through an excess concern with meaning. The world, I have often observed, is far stranger than the rational mind would allow. The dense web of source materials and curious obfuscations gathered here is one a determined investigator might unravel in a short time but to no great gain. They should not be permitted to detract from the power of the oracles themselves. The recordings here are hallucinatory and compelling pieces. I would not presume a clearer commentary upon them than that offered by Bausor’s writings nor seek to unravel its mystery, I commend it heartily to all of an inquisitive nature.