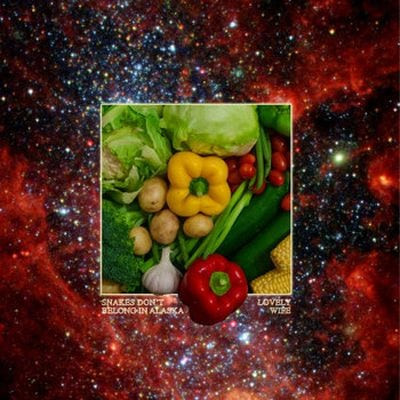 Split by Lovely Wife and Snakes Don't Belong in Alaska

I went to a gig the other night, in Edinburgh. A Newcastle band called Lump Hammer was playing. A trio, featuring drums, baritone guitar and vocals, they were very good.

If you are now wondering what the hell I’m banging on about, you should know that I recognised the large bearded chap with a bag on his head bellowing “YOU’RE DOING IT WRONG!” over and over as one James Watts1. The very same James Watts who does vocals for Inverted Grim-Mill label-mates Lovely Wife. None of which is particularly relevant here, really. I just wanted to use this tenuous link as an opportunity to big up Lump Hammer. Let’s move on.

Lovely Wife are, as you may have guessed, from in and around Newcastle. They feature an eternally shifting line-up, centred on bass molester Joe Garrick and vocalist, the aforementioned James Watts. The rest, drummers, guitarists, whatever, depends on who is available at the time. In this case, we have Skylar Gill on drums, Jon O’Neil on guitar and David Curle on synths. At least, that’s what it says on the press release, and I have no reason to argue.

As you might expect from a band which makes everything up as it goes, one never really knows what you’re going to get from Lovely Wife. Crushing doom riffs one moment can morph into jazzy noodling, or chaotic noise. Their songs are often quite long. It usually works out, and is never less than … interesting.

In this instance, their contribution to the split, ‘Deafening Soup’, is a mere fifteen or so minutes long, and is relatively restrained. Perhaps the result of recording in a proper studio for the first time ever, rather than doing it live around a single mic. More ‘psych’ than doom or noise, this time, and entirely compatible with what comes later.

The immovable two note bass riff that is the foundation of the song emerges, eventually, from a jaggy swamp of scrapey noises and hums. Scattered drums settle and solidify whilst the guitar sneaks and creeps about, filling in all of the spaces before merging with, and reinforcing, that bass. Eerie synth noises poke out of the structure here and there. Inside the building, there seems to be a madman moaning and yelling wordless noises, distorted by distance and, very possibly, alcohol.

I am mesmerised. The song has evolved steadily into a dense, pulsating juggernaut, that bass riff grown massive, when suddenly something like a tune breaks out and for two minutes it is truly magnificent. Then everything falls away, leaving only a bare skeleton. And then even that decays and crumbles into dust.

Now, we shift, nigh on imperceptibly, from a band I’ve known and loved for some time to one I have only just discovered. Again, I’m informed, a band which pretty much improvises everything, but which seems to draw from a different bag of influences to that used by Lovely Wife. Newcastle trio Snakes Don’t Belong in Alaska take us back to those decades when heavily bearded weirdos playing psychedelic music ruled the underground scene2, and when everybody stunk of patchouli and rancid afghan coat.

Like Lovely Wife’s song before it, SDBiA’s ‘Eat Your Salad’ revolves around a relentless , hypnotic brachiosaurian bass riff – huge, lumbering and unstoppable – with pure retro-psych guitar winding sinuously in and out of its massive legs. It’s raw and unpolished, and entirely awesome. It’s like listening to Hawkwind playing live in a tiny cellar bar, but without the electronic clangs, honks and bleeps. It’s space rock, but made for dodgy independent traders in grubby boiler suits, piloting rusty tin can space-ships.

The trippy lyrics, from what I can make out, are absolutely true to that period  when everybody and his dog were off their nuts on the acids and couldn’t stop banging on about alternative reality and other weird stuff like that – “Breaking the walls of reality / walls of sound / lines of existence” and such. Perfect. I’m loving this.

Their second song, ‘Sauerkraut Rock’ brings us forward in time, more akin to the current crop of robotik psych bands, Minami Deutsch and the like. It takes off – perhaps unsurprisingly, given the title – down the krautrock motorway, all metronomic drumming, pulsing bass and squiggly guitar. It’s perfect driving music, for those warm days when you can head off to nowhere in particular with your windows open and the tunes turned all the way up. Sadly, it’s waaaay too short, and you probably couldn’t even get from Newcastle to Durham before the end. It needs to be longer. Much, much longer.

A little bit of research reveals that this is SDBiA’s NINTH record in the last two years. NINTH! And I have never heard any of them except this one. I now feel an urgent need to try to hear all of the rest, as soon as possible.

There seems to be a lot of good stuff going on in the North East of England just now3 and the folks at Panurus / Inverted Grim-Mill are doing their best to bring it to us. Do yourself a favour, check this out, close your eyes for a while and let it carry you off to weirdy-beardy space-land for a while4. Then buy it.