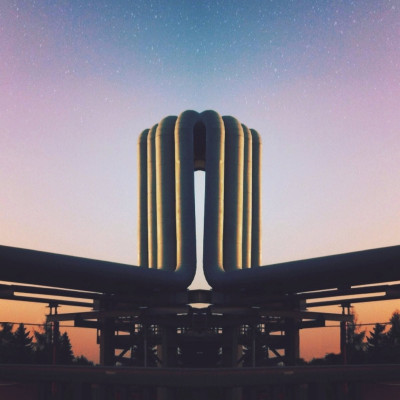 False Patterns is the band’s second full length album. I say, “the band”, but that is not entirely accurate. A more accurate description would be a long-distance studio exchange between two musicians in different countries who rarely meet physically but have similar tastes and create awesome music together. Needless to say, this is not an album that will be performed live any time soon. The duo initially met on-line and started collaboration primarily to remix the music of others. That morphed into continuous project that became Sunset Wrecks. Over years of experimenting with and molding ideas via files sent back and forth over the internet, False Patterns emerged.

So, what is False Patterns? I’d call it “sludge IDM”. The songs are consistently underpinned by slow heavy sludgy doomy riffs on a down-tuned guitar. This heaviness is the heart and skeleton of the music, which alone would draw comparisons with Godflesh, Jesu or bands like Nadja. However, on top of that that are layers of ephemeral ambiance that create complex soundscapes, sometimes left at that, and sometimes distilled into pleasing harmonic melodies. Here there is more influence from shoegaze, wall of sound, and experimental dance music. The comparison to IDM is due to an electronic element to the band’s music. The drums on most of the songs are synthetic, ala Godflesh, but a bit less caustic, and much of the ambient sounscapage is rooted in ambient dance music. Thus, sludge IDM.

I mentioned I think the album is excellent. There are no vocals and the band doesn’t supplement the lack of human voices with samples as a lot of peers do, which makes for a relatively pure listening experience and allows the imagination to take its course. There isn’t a bad song on the record, and it is highly listenable the whole way through. It is style consistent, develops naturally, stands up to repeated listens, is experimental but not annoying, heavy but smart, cold and distant, but somehow also quite majestic. The album starts with a synthetic, chilly vibe in ‘Scavenger’ and then takes the listener all over the place. Some tracks, like ‘Skycap’ and ‘Elements Assemble’, get quite spacy and feel a bit like soundtracks to a Mortal Kombat fight scene on some distant moon. Others like ‘Till Tomorrow’ and ‘Surrender’ (probably my two favorite tracks on the album) explore much more emotional complexity, while remaining heavy musical juggernauts. ‘False Patterns’, the title track, is heavy as hell and introduces live drums just to switch things up. It works.

Overall, I would highly recommend this album for any fans of any of the bands mentioned in this review. But even if you like shoegaze or gothy standards like MBV or Jesus and Mary Chain, you’d probably find common cause here.