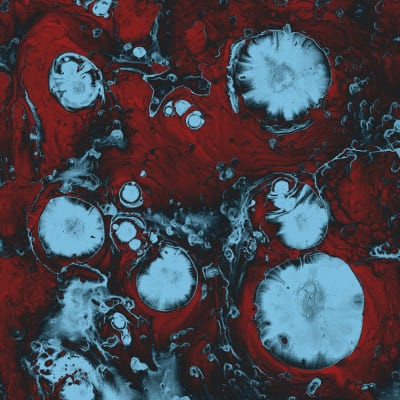 Infinite Games by The Black Queen

The Black Queen is an outlier in more ways then one. On one hand, its easy to contextualize the project from Greg Puciato of Dillinger Escape Plan, Telefon Tel Aviv’s Joshua Eustis, and NIN technician Steven Alexander Ryan as part of the resurgence of 80s aestheticism in synthwave or the visual overdrive of Stranger Things – but that is somewhat of a misnomer. The retro-revival movement accentuates the most stereotypical clichés and codas of that age of pop music, and is more informed by film scores than albums. The Black Queen is not that, and should not be put under that banner. For as many surface level similarities that it has to those bands its the original voice and vision that puts it in the same bracket as the bands that defined that decade whilst being entirely peerless – bands like Depeche Mode, New Order, and The Cure.

With their debut album Fever Daydream they produced an anthemic obfuscating love letter to a decade of mysteriously haunting feminine pop – but now with their sophomore release Infinite Games things seem more intense and vulnerable. The Dillinger Escape Plan is no more, and now Greg Puciato no longer has that outlet to release his aggressions and anxieties whilst Joshua Eustis has created the first music under Telefon Tel Aviv after its other half, Charles Cooper, passed away. What they have created then in Infinite Games is a fractured response to these events that is both beautifully crepuscular and enveloped in an icy visceral darkness.

Songs are gracefully expansive in their light touch with a miasma of trickling anxiety, with ‘Thrown in the Dark’ and ‘Spatial Boundaries’ coming across as the most inviting apexes for the album to hang upon. The latter is an incredibly evocative trip to a small club off the neon lit streets of Hong Kong playing The Pet Shop Boys to a melancholic crowd that its hard to see not being an instant favourite. But the albums true strength lies in the wraithlike choruses and metronomic electronics that flow with a clear and present clarity through water clear production that allows synths to glow and Puciato’s voice to echo as if a longing spectre. In terms of character its easy to see The Black Queen amongst peers Black Marble, Cold Cave, and Chino Moreno’s ††† (Crosses) – but there is too much of its creators fears and wishes hard coded into the sounds that they could never be mistaken. There are obvious influences from Nine Inch Nails; apt considering the band’s lineage. In fact many songs could be thrust from an alternative future where Trent Reznor never made Broken and instead carried along the path he set on Pretty Hate Machine.

These exquisitely catchy tunes wrapped in translucent fog would be vessels without a voice if it wasn’t for Greg Puciato’s genuinely touching vocal performance. The album feels like a response to the premeditated suicide of Dillinger Escape Plan, and its hard not to connect his lyricism and vocal delivery as a direct response to the band that has defined his early career. His voice, much like the first album, dances and plays around in a new spacial context – but it always seems informed as a counterbalance from his work with Dillinger. This is Greg Puciato at his most vulnerable and romantic, making it one of his most personable and connecting vocal expressions yet. At first its difficult to believe that these soft spoken whispers are from the same man that ran headfirst screaming into a crowd at Virgin Megastore, but under closer inspection it becomes obvious that it could not be from the mind of anyone else. Lyrically the album is very classically gothic, with a fixation between romance and death. Through the winding moors of ‘No Accusations’, perhaps the most industrially tinged track on the album, there is a moment when the gentle poetry is brought into hard focus with a striking admission: “There is nothing that I want more than to die with you next to me.”

The Black Queen is an important project, not just for the willing catharsis of any listener who may choose to engage with its neon cloaked form but as a clinically needed outlet for its creators. Its a darkly warm and death obsessed romantic that is renown to frequent the trendiest clubs in the city and the darkest recesses of the mind at home. Infinite Games is a multifaceted creation that poses the question that the light and dark are inseparable, and as such is irresistibly attractive and terrifyingly abject at the same time. Its this rawness that makes the album a fun social listen when you want it, and a deep introspective listen when you need it. The Black Queen rises again, and long may she reign.