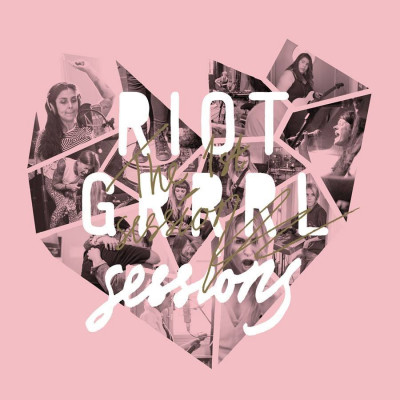 Recently my partner and I spent a few days in Stockholm (awesome place and not necessarily expensive), our time there happened to coincide with the Stockholm Fringe Festival and on the programme was an exhibition of, and talk on, something called Riot Grrrl Sessions, this called for further investigation!

Riot Grrrl Sessions is an ongoing music and art project in Stockholm, the brainchild of punk musician Canan Rosén who knew the world needed more Riot Grrrl music but was pondering over the quandary of how, when everyone was already so busy with their existing bands. The solution? One weekend in September 2017, one studio, a dozen riot grrrls from a variety of bands and genres writing, rehearsing and recording an album, with everyone involved in the project being women, non-binary or transgender people. The world’s first Riot Grrrl Sessions! The result? A 13 track album, suitably entitled The First Session, released in February this year to enthusiastic responses, one reviewer commenting ‘Unashamed and awesome, the Riot Grrrl Sessions brings together brutally fantastic melodies and awesome choruses that will get stuck in your head, the more you listen the more you love this album, 9/10 (1)’ and another that ‘The album captures everything that was riot grrrl during the movement’s heyday (2)’!

If good art is the successful transposing of the artist’s idea into their chosen medium then Riot Grrrl Sessions nailed it and in snatched conversations at the busy hub of the Fringe Festival I asked Canan if she would be happy to do an (online) interview about the project, she kindly agreed.

(((o))): Riot Grrrl Sessions is such an exciting, fully realised album! It’s amazing that it was written, rehearsed and recorded all in one weekend! Can you talk us through that weekend? Where did you get together, was everyone there the whole time?

Thank you and yes it’s such a huge and cool thing we did! We spent three full days, Friday to Sunday in legendary Swedish studio Riksmixningsverket (owned by Benny from Abba). We were 12 musicians and everyone was there the entire weekend. Also we had Linn, studio manager and head of recordings and production, Katharina, studio assistant and second recording engineer and Frida, studio assistant who later on did master the entire album. The studio is quite big which led us to possibilities to work parallel during the days. We made suggestions on which musicians that should play on which songs and then we made a schedule so when one line up was in the big recording room another one was finalizing songs and rehearsing in the kitchen area. On the second floor we recorded additional vocals, guitars and such. Everything at the same time. It was crazy work but lots of fun!

Hahahahaha TELL ME ABOUT IT! We also had two ”studio moms” making sure there was coffee, fruits and candy. They also went to pick up our food each day. You work so much better if you eat and drink! We also had two still photographers working shift documenting everything and also a film crew of four people recording every step we made. So a lot of people running around!

Nope, for some people in the project it was the first time they met. It was like: “Hello, I am insert name let’s go record a rock song together!”

(((o))): Was it easy for musicians from different bands and genres to get ‘in synch‘ with each other?

Almost every musician in this session has been active in the punk/rock/hard rock community which are genres that has quite a lot in common. One of the musicians, Katja, hails from the electronic scene, but she might be the most badass of us all making dirty, distorted superfast techno and such haha. All of us are professionals and very nice people so everything worked out super cool.

(((o))): What was the key concept behind Riot Grrrl Sessions?

To make riot grrrl music in a very limited amount of time with a lot of musicians involved. And that everyone involved in every step of the project needs to identify as a woman, non-binary or transgender person.

(((o))): Did the idea for the RGS weekend gradually take shape or did you know from the start that RGS would take that form?

Oh, I didn’t have a clue. At first I just wanted to start a riot grrrl band. But when I asked around people didn’t have time for that. They were too busy with their other bands, other careers or popping out rock babies so Riot Grrrl Sessions happened because I had something that needed to be solved. Because the idea of NOT making riot grrrl music wasn’t an option.

(((o))): Was it a very organic, evolutionary creative process or did it have to be very quick and decisive in order to complete the album?

I think both. We didn’t have time for working with a lot of details but we still tried to keep a very open mind about everything since this was a very different process than what all of us are used to. I think the separatist take on the project made it easier for everyone to feel safe and focus on being creative rather than spending energy on claiming your space as a musician etc. We could get to work immediately so to speak.

(((o))): How did the songwriting process work, did people come with rough ideas that the group then worked with?

We had rough sketches for almost every song. They were more or less finished. This was a real challenge I tell you. But if someone had an idea everyone was 100% more likely to say ”Yes, let’s do that” instead of hesitating, trying 1000 different ideas etc. I think that’s a good recipe for punk songs since the best punk songs (according to me) are very uncomplicated and straight forward.

I think the lyrics really is what separates Riot Grrrl songs from ”any” type of rock song. The lyrics are in line with what the riot grrrl movement is all about. The fight for equality, the right to decide about yourself and your body, descriptions about how fucked up parts of our society is and how we’d rather want it to be, pro-masturbation songs etc.

‘What I Want’ is a cool garage punky song with almost a spoken word verse. It’s like a long wish list on how we want this world of ours to be!

Every kid loves ‘Unicorn’. It’s like a kid song in a punk outfit. The message is powerful and empowering that you should always be yourself (unless you can be a unicorn of course). It comes with a bubble-gum powerpop outfit which some people love (and some people don’t haha).

‘I Eat Boys Like You For Breakfast’ is about dudes coming out as ”feminists” but doesn’t have the wildest idea what they are talking about. True posers that keeps on oppressing women thinking they are doing the exact opposite.

(((o))): Has Riot Grrrl Sessions been ongoing? There was an exhibition and talk about RGS at the Stockholm Fringe and I think you are hoping to have a documentary out at some point…?

Yes, this is the aim of the project. We want it to be a platform where we can make whatever we want to make. I love the idea that riot grrrl isn’t just about music, it’s about all different art forms and ways that you could express yourself in. I want the project to be whatever we want it to be. A girls rock camp organisation here in Sweden, Popkollo, uses the saying DIT – do it together, instead of DIY – do it yourself. I think that’s pretty much sums up what I’m after with Riot Grrrl Sessions!

(((o))): What has the response been like to RGS? Has it connected up with similar things happening in other places? Or inspired similar things…?

Well, the thing is there are no similar things like RGS. Not even in other rock genres (or maybe any genres). So this kind of WORLD UNIQUE THING we have made should blow the internet and media away. Which would have been the case if we’ve had thousands of cash money to spend on PR. Which we didn’t. So first and foremost: we did this thing for our own sake. When it spreads, which it has, it’s like a wonderful bonus. Riot Grrrls from all over the world have made contact with us praising our thing. I mean if I inspire one person it makes me happy so this is super cool! Also, it’s a great opportunity to grow a riot grrrl network. We have the internet these days you guys!!! Let’s get in touch goddammit!

The album is streaming on all the common streaming services. But we also made vinyl! you can buy them from our record label’s homepage (https://www.gmrmusic.se/product-page/riot-grrrl-sessions-the-1st-sessions-pre-order-black-vinyl or contact us through mail or social media and we’ll figure something out).

Next up is finalizing the documentary from the first session. When it’s finished we will be working on spreading the documentary. When word gets out it’s easier to sell records and merchandise which is the only way to finance another possible session! This goes for all bands. If you want musicians to keep going you also need to support them because in 99% of all cases bands and projects like these doesn’t make any money. Even though how much you’re in love with the world of DIY everything costs. An important reminder to all fans out there!

Thanks to Canan for time and words.