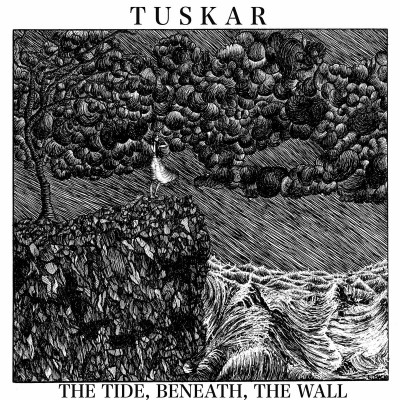 The Tide, Beneath, The Wall by Tuskar

20 minutes of sludgy goodness from the UK two-piece Tuskar opens with the bottom-dredging scud intro of ‘The Tide’ echoing the best of epic doom-sludge lurches from Black Sabbath and Electric Wizard. Joined by tsssts of cymbals then slimy seaweed feedback trails, the riffs that lurch out of the foulness manage to be energetic and nimbly articulate while still totally grime-encrusted. We get surprisingly speedy from what I was expecting from the sludge intro and the (excellent) droned wallowing I heard live at the Underworld, but the one-chord-hammering section is pleasingly doomy despite the postmetally pace.

Next up is the shortest track ‘Beneath’, with a great riff that’s simple in chord structure, but compellingly complex in rhythm, with the focus on the interplay between two chords kept exciting by the lurching rhythm as well as the percussion that feels just exactly on edge between intense beat-keeping and wild chaotic clatter, all amped up steadily in the crescendo towards the breathless sign-off.

Finally, third track ‘The Wall’ has more reflective, echoey harmonics to the introductory clanging guitar, with layers and layers more of this stuff piled on before some vaguely ‘Iron Man’ effects-stretched vocals suggest that maybe this lot may have spun Paranoid once or twice in the decade leading up to recording this. The next bit of yelling-from-a-nearby-canyonside puts me in mind of Conan’s caveman aesthetic as much as their sound, while the dinosaur riff is still lumbering around bending gravity around it. Cymbal smashes and drum thuds come in and that’s really enough, adding bashing and smashing propulsion to what’s already a treacly horror of a sludge riff. There’s a bit of lively thrashing towards the end with a touch of sci-fi guitar effects that phase us into a space-caveman-meets-the-cosmic-brontosaurus zone, then we zip off into a distant point of light and we’re done.

Like a mad geologist’s spare room, this short record is crammed full of all kinds of species of metal and rock, cramped together in a powerful, multifaceted lump of heaviness.