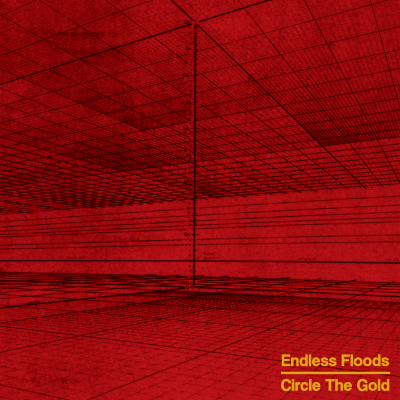 Circle the Gold by Endless Floods

Endless Floods present a new full length, refreshingly eschewing the overtly scuzzy visual aesthetic of a lot of sludge or the stereotypical forest graveyard business. Instead, and in line with the striking towerblock artwork of previous album II, the imagery has a kind of concrete-y urban feel to it too. Graph-paper-planned perspective lines sketch out a sort of blueprint in threatening red… maybe not the kind of image the heavy doomlike post-metal music naturally conjures up necessarily, but resonating with the kind of incisive detail and fierce control laid out in the forceful sound.

Two side-long tracks here (the release is announced as just vinyl/digital), both slow but massive, with the heaviness leavened by a open-throated harmonic cadences that feel like the forced expanse of a cold blue sky when you’re hungover but out early in the morning. It’s a three-piece sound with vocals infrequent and not too high in the mix, so it’s a beast of a sound from a band making the absolute most of the fundamentals.

Each track has its quiet passages, where blank space opens up for contemplation but the intensity is sustained by the solid, sinewy sound of each instrument, whether it’s the full and precise drums only accompanied by faint streaks of amplifier blackboard-nails, or the fearsome bass lines. The bass sound is great, I can’t decide whether it sounds like a snowdrift or a snowplough: on one hand it’s made up only of touches of lightness and cold but is somehow monstrous and weighty; but on the other it also drives all before it in propulsive waves and cascades. There’s a faintly anthemic quality, not in a cheesy lighter-wave-along way but something about the ways the chords stack and intonate and develop adds up to a certain unpretentious grandness, if that makes any sense. If it doesn’t, listen anyway and revel in this stickiest and solidest document of austere experimental post-extremity.