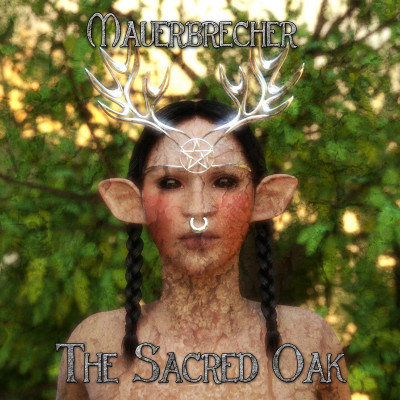 The Sacred Oak by Mauerbrecher

Having started playing Dungeons & Dragons recently, I’ve been getting steadily more interested in Medieval Music. While there’s obviously a plethora of this style already on offer, not many contemporary artists are braving the old waters of this cornerstone of Modern Music. Mauerbrecher however are one such group to do so and with their third album, The Sacred Oak, they have created a mystical portal into a forgotten fantasy world, with rich compositions and diverse instrumentation.

Mauerbrecher is headed by the enigmatic Erilaz Asugisalas. Having started his career making Electronic music in the early 90s, his passion for Medieval Music soon flourished into a dedicated project with an ever changing line up. On The Sacred Oak, Mauerbrecher combines original compositions with some reimaginings of older pieces, dating as far back as the 1600s.

The original compositions have an incredibly spellbinding quality, plunging you straight into your own Fantasy realm filled with images of Druids, Elves and ancient woods. Tracks such as ‘The Labyrinth’ and ‘The Shaman’s Picnic’ achieve this aural teleportation with drone based phrases, often played on Harmoniums and Shruti Boxes, with a large variety of instrumentation forming the melodies. Some of the other originals, such as ‘Cathérine de Coutiers’ and ‘Rude Mechanicals’ sound more as you’d expect, with an organic Folk feel accompanied by upbeat percussion and catchy hooks. These tracks would feel right at home in any Ye Olde Tavern. The strongest pieces in my opinion however are the ones that incorporate some elements of the Electronic music that began Mauerbrecher’s career. These modern synthesised elements blend with the traditional voices seamlessly, creating something truly unique to listen to. ‘Auberonde’ for example features a swirling synth line amongst a minimal drum loop, and the sparse, heavily effected vocals of ‘Midsummer Morning’ also hints at these Electronic and at times Psychedelic facets.

The reimagined tracks on this album all share the same “Classical” feel and thankfully their translation into a modern day studio hasn’t caused them to lose any of their lustre or mystique. Two of these, ‘Branle de la Torche’ and ‘Branle de Provence’, were pieces of music written for a Branle, a type of French dance in the early 16th Century. With this in mind, the tracks take on a new, almost aristocratic air. The history of these two pieces alone gives the album a layer of authenticity, however Mauerbrecher has more up it’s musical sleeve. ‘Dancing Fairies’ is a medley of two traditional Irish songs, ‘King of the Fairies’ and ‘Morrison’s Jig’. This track, or two tracks, does have a distinctly Irish vibe from the offset, which can be picked up on even without prior knowledge of it’s origins. The earworm that is the first hook grabs you by the Shamrocks and jigs you for it’s 4 minute duration. The last of these, entitled ‘The Faithful Shepherd’ (originally ‘Il Pastor Fido’), has it’s own interesting history of musical forgery, between popular Classical composer Vivaldi and original composer Chédeville. The piece itself has that distinctive, refined flavour that is synonymous with this style of music. It may be a little hard on the ears at first if you aren’t ready for it, but is definitely one of the “oldest” sounding tracks on this album.

I think the biggest praise that can be given to Mauerbrecher is that, with the exception of the synth or vocal heavy tracks, the original and reimagined compositions blend together flawlessly. Without knowing which was which, you wouldn’t be wrong to believe these were all originals or all reimaginings of older pieces, so credit needs to be given to Mauerbrecher’s ability to capture a sound and recreate it to a tee. My only criticism is the almost purposeful restraint set by the group to not include more “modern” elements in their music. It’d be perfectly reasonable if they didn’t include any, lending the listener a truly authentic and immersive experience, but the mere hints of these throughout the album are truly the highlights, and it’s a shame they weren’t more prevalent in my opinion.

The Sacred Oak really is a wonderful listen. It’s captivating atmosphere, attitude and instrumentation effortlessly takes you to a different world, your mind the canvas and the album the paintbrush. It’s also a fantastic gateway for people such as myself to get more accustomed to the slightly challenging nature of Medieval era music. There’s no guarantee that you’ll enjoy this album, I’m sure some people will get to ‘Branle de la Torche’ and will turn off immediately, others will be confused or get chuckle out of the seemingly absurd instrumentation, but hopefully you’ll listen to it, and be just as enthralled by it as I was.