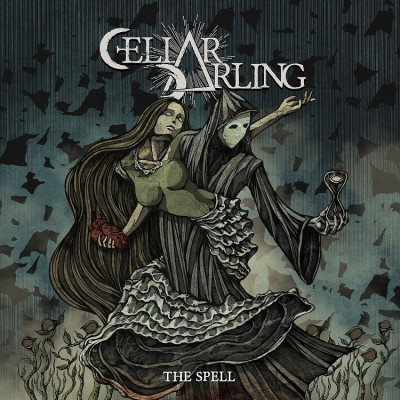 The Spell by Cellar Darling

The ‘difficult second album’ has become part of musical lore. The argument runs that bands hone their craft, land a recording contract, and their first album is a creative explosion, a manifesto for their skill and craft. Thereafter, under the weight of expectations both commercial and artistic, from without and within, the second album proves more problematic.

Another type of album that often proves difficult to construct is the concept album. When a band describes their new album as a concept album, there are inevitably accusations of pretentiousness, and there are plenty of examples of albums with grand conceptual ideas behind them that don’t gel.

Swiss rockers Cellar Darling, therefore, seem to have made life difficult for themselves. The Spell is not only their second album, but it is also a concept album, with a distinct narrative – indeed the deluxe edition of the album comes with a second disc containing a “storybook”, where vocalist Anna Murphy relates the narrative against the backdrop of a series of animated shorts. The Spell is unapologetic in setting out its stall up front. Unlike Cellar Darling’s first record, the well-received This Is The Sound, The Spell is not merely a collection of songs, but a greater whole, designed to be heard in a single sitting, with a definite beginning, middle and end.

As with all concept albums, the focus on the central narrative is both a strength and a weakness. There’s little question that, shorn of their connection to the rest of the story, some of the songs lose their true impact; there is a definite commitment that is required of the listener to listen to the whole in order to get the most out of the album. The consequence of this is that on first hearing, few of the songs leap out of the speakers at the listener in the way that debut album triumphs like ‘Black Moon’, ‘Challenge’ or ‘Rebels’ did. The band have built on their hooky, anthemic folk-tinged metal to produce something altogether more intricate and ambitious.

However, for all the perceived limitations placed upon it by its format, The Spell weaves a potent magic. Crucially, the band’s performances are stellar; a palpable confidence infusing their best recorded performances to date. As the undeniable focus, Murphy carries the weight of the storytelling, but her incredibly flexible, emotive voice lends wings to the narrative. Needless to say, her dextrous hurdy-gurdy playing is much in evidence, too. Guitarist Ivo Henzi is in remarkable form here, too, his playing nimble and atmospheric whether he’s laying down doomy riffs or conjuring a more pastoral feel. Drummer Merlin Sutter similarly injects a great deal of light and shade into his performance, digging deep for explosions of energy when required but dialling things down to provide peaceful spaces in the record that really help to tell the story.

There is a dizzying list of musical highlights: for instance, the way Henzi’s guitar conjures the spirit of Black Sabbath’s eponymous song during ‘Death’ – only for Murphy’s playful flute to run rings around it; Murphy’s acrobatic vocal runs on the title track and ‘Freeze’; the furious assault Sutter mounts on his drumkit to launch the eerie, nightmarish instrumental mid-section of ‘Insomnia’; the woozy expanse of piano and flute that coalesces into ‘Sleep’; the wistful, cathartic ‘Drown’ switching between passages driven by churning riffs and tranquil hurdy-gurdy driven folk. More so than their debut, The Spell is a varied, colourful record.

Of course, without a compelling story to tell, the band’s unquestionable musical skill would be merely window dressing. Happily, The Spell weaves a simple but intriguing tale that can be absorbed on a number of levels. The band use the device of a girl falling in love with Death – presented here as a character that Terry Pratchett fans would be delighted to refer to as an anthropomorphic representation – to touch on a number of topics, from ecological breakdown to depression, obsession, mortality and the nature of true happiness. Each track builds on these topics as well as moving the story along, and it’s to the band’s credit that the results never feel preachy or overly complicated, preserving a simple narrative that allows listeners to take from it as much or as little as they will. Taken purely at face value, the story of The Spell is a fantastical myth; but, like all the very best concept albums, it uses its storytelling device to talk about more contemporary issues.

As befits any great conceptual album, the band have gone the extra mile with the striking artwork, which generates an atmosphere of its own and forms an essential part of the whole. Costin Chioreanu, a Romanian artist best known for his work with Opeth, Wardruna, Ulver and others, is responsible for the artwork – and the animations used by the band for the promotional videos produced for the record – and he has excelled himself here, creating iconic images that further build on and reinforce the album’s mythology.

Cellar Darling’s gamble in tackling a full conceptual piece for their second full-length record has really paid off. Not only does it showcase the band at their best and demonstrate a different side of their writing, but conceptually it is a rich, rewarding record that benefits hugely from repeated play. Intelligent, ambitious, varied, dynamic, atmospheric and emotionally satisfying, this is the sound of a band daring to follow their muse wherever it leads. Comfortably their best work to date, The Spell is as mesmerising as its title suggests, a compelling modern-day fable loaded with meaning and melody that is surely a future classic in the making.