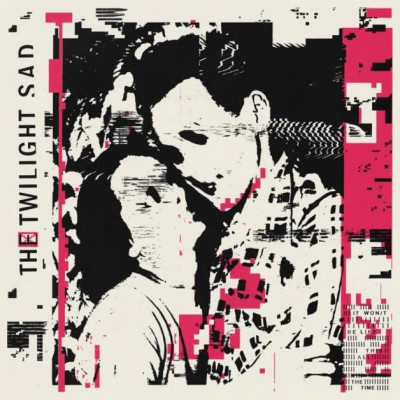 For those who have followed Scottish alternative folk-rock band (well, that’s my description for them anyway) The Twilight Sad since the release of their cavernous debut album Fourteen Autumns and Fifteen Winters, way back in 2007, it has been quite the tumultuous ride, and I’m not just talking about the music.

James Graham (Vocals) and Andy MacFarlane (Guitars) remain the fulcrum of the band, having formed it whilst still in, er, short trousers. However, original members Craig Orzel (Bass) and Mark Devine (Drums) are no longer a part, having left amicably in 2010 and only last year respectively. Johnny Docherty replaced Orzel on Bass, originally in the live setting, with Sebastien Schultz coming in for Devine on Drums. Brendan Smith (Keyboards) completes the latest line-up and has been a part of the band since 2012. The changes in personnel are worth noting because, despite them, The Twilight Sad’s entirely distinctive tone and hue has remained resolutely unruffled throughout. Graham’s impassioned vocal, thoroughly drenched in North Lanarkshire, has gone a long way to see to that. In addition, they continue to write songs and tell stories about the people of their community, of pain, loss, illness, hardship. These themes stretch far beyond their home towns of course but are not typical themes that the listening majority are ready to welcome into their lives in the form of an 11-song album. Finally, this bleak, drizzly backdrop has nearly always been accompanied by MacFarlane’s ferocious guitar playing- whether it be in the form of a thoroughly unexpected sonic buzz saw to the head, or in his ability to maintain a towering inferno of noise through what would otherwise be a thoroughly serviceable folk song.

2012 saw the release of the band’s third album, No One Can Ever Know, and it represented a real departure from their previous sound- tours with Errors and Mogwai seeming to influence a fully formed leap into icy electronics and much sparser arrangements. It was still very much a Twilight Sad record, with Graham’s imposing presence and intense lyrical imagery even further to the fore, but it lacked the warmth and depth of sound that so characterized their earlier material, and especially on the magnificent Forget The Night Ahead, from 2009.

It was something of a relief, therefore, that 2014’s Nobody Wants To Be Here, and Nobody Wants To Leave saw the band re-incorporate the enveloping soundscapes of previous material, albeit in a much more mature, together-sounding record, and combined with synthesized and newer acoustic elements.

So, here we are then, four and a bit years later, and we are presented with fifth studio album It Won/t Be Like This All The Time. One cannot talk about the record without mentioning the sudden and tragic passing of Scott Hutchison in May last year, a great friend and soul-mate of the band. Anyone who has witnessed live The Twilight Sad’s tribute to Scott- their deeply cathartic interpretation of ‘Keep Yourself Warm’, a song by Scott’s band Frightened Rabbit, will bear witness to the emotional impact his death has had on those closest to him.

Writing this review a couple of months after the record’s release gives me the opportunity to comment on the new-found commercial success of the band. The album reached number 17 in the official UK chart, a cast-iron declaration of how far The Twilight Sad have come, and real vindication for the years of toil and perspiration.

This 11 song collection does see the band at their most accessible, both sonically and lyrically, with the harsher, colder electronic tones of ‘No One Can Ever Know’ dialled down, and Andy MacFarlane’s vociferous guitar providing enough depth and intensity to songs, without pummelling them into submission. Having said that, the opening ‘[10 Good Reasons For Modern Drugs]’ is a return to stark electronica, with an urgent hiss which you think is going to explode at any moment, but it never does, while Graham asks, time and again “Why can’t you remember me? I’ve seen it all before”. The Twilight Sad have always understood the effectiveness of lyrical repetition in delivering a message, and those messages are probably more direct than ever before.

The 3 preceding singles to the album probably best encapsulate where The Twilight Sad are as a band right now. The closing ‘Videograms’ is heavily influenced by The Cure, who they have extensively toured the USA with, and Robert Smith was an ‘advisor’ on the album. The track has a very similar tone and feel to The Cure’s Disintegration era, with the bassline, in particular, right from the Simon Gallup school of gloomy splendour. ‘I/m Not Here (Missing Face)’ is noisy, urgent, unequivocal indie rock, with Graham again in fine form, enquiring “Why do you do this to yourself?” But it is ‘VTr’ that is the undisputed highlight of the album. Lyrically and sonically it has a depth to it so chronically lacking with a lot of bands, and a chorus and melody that has been buzzing around in my head for weeks. The kind of song that if I heard it on the radio (when I listened to music on the radio) for the first time and didn’t know who it was, I would instantly be turning it up, and then waiting intently to find out the name of the band.

Elsewhere, the Mogwai-esque titles of ‘Shooting Dennis Hopper Shooting’ and ‘Auge Maschine’ see the band deliver a similar eighties-style indie banger to the ones their Scottish compatriots have been fond of knocking out on occasion recently (‘Party In The Dark’, ‘Teenage Exorcists’), while ‘The Arbor’ is simply gorgeous, Graham’s mournful, ‘Gone For So Long’ refrain providing one of several hugely evocative moments on the album.

While the ravenous noise of their first couple of albums is now largely absent, the now ever-present electronic element of The Twilight Sad’s constituent parts has given them a vastness of sound which still envelops you, but it invites you in with a display of understanding and emotional intensity, rather than the promise of an exhilarating night of chaos and passion, as before. Maybe they won/t be like this all the time, but where they are right now is hugely appealing to a lot of people, and The Twilight Sad’s new-found success is richly deserved.