(((O))) Interview: Theudho: Answering the summons from the ancient forests 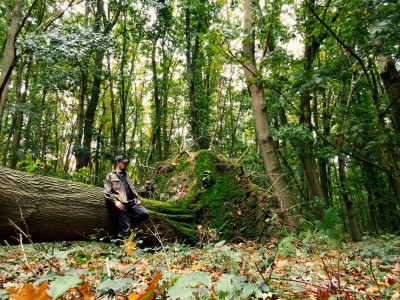 One could say that the lyrical themes gradually became a bit more obscure as obvious sources of inspiration were depleted early on. The additional issue is that a lot of bands are fishing in the same pond as far as lyrical inspiration goes, so it is a necessity to dig a bit deeper.

Pagan times have seen renewed interest over recent years. Perhaps it’s slightly one-dimensional with a wide range of Viking themed music, tv-shows and even fitness events. But for those willing to look deeper, there’s such a wealth of ideas and cultures to be found that inspired to this very day. That is a large part of Belgian band Theudho.

Band member and founder J.S. has been making music for many years and is inspired by that remote past as well as the extreme music scene. These two have always combined well and with Theudho, he recently released De Roep van het Woud, which translates as “the call of the forest”. He was also kind enough to tell us about his calling, inspiration and work, with some good advice for those looking to find their own green cathedral.

E&D: Hi, Could you kindly introduce yourself and tell us a bit about Theudho?

J.S.: I initially planned to use the name þeuđo, as I originally spelled Theudho, for a keyboard/synth project back in 2002. Things rarely go as they are planned; guitars and drums were eventually introduced and the music shifted towards black/pagan metal. The first demo was recorded as a one-man band and released in 2003. It was a fuzzy lo-fi ordeal that nevertheless resulted in a record deal. By the time of the second album, Theudho had become a band with a full line-up that also performed live. However, for the fifth and latest album, I decided to return to the one man band formula.

As for myself, next to a passion for music, I early on developed an interest in pre-Christian Germanic mythology and culture. Next, to the appeal of the rather notorious local music scene, this is the reason why I started to spend considerable amounts of time in Scandinavia since the latter half of the nineties.

E&D: What originally inspired you to create this type of music? Which bands would you consider your inspirations?

J.S.: As strange as it may sound, I actually became inspired to play this kind of music again when a friend (my partner in crime in the neo-folk/industrial/martial project Weihan) and I were backpacking in Ireland back in 2002. We visited loads of Celtic and even some Norse sites in the south, but especially some of the landscapes we witnessed just breathed the imposing atmosphere that is synonymous with a lot of classic second wave black metal. I just had to do something with these impressions.

There were quite a few worthwhile examples when it came to this kind of music. The early albums of Blut Aus Nord, Falkenbach and of course Bathory and Burzum specifically because they were one man bands too (at least at some point), but there is a whole array of Scandinavian, Slavic and even some German bands that I would consider inspirational.

E&D: You’ve been active in a number of bands, lately also with a new project named ‘Slithering Decay’. Can you tell something about your musical endeavours and the latest projects you are working on?

J.S.: I’ve been in quite a few bands and projects in the last 25+ years. The latest band Slithering Decay is inspired by all those great albums that were released in the Stockholm scene in the early nineties. I was in a death metal band too at the time, but we honestly lacked the skill and knowledge to write and perform music that was even remotely listenable. So this is basically a second attempt to pay tribute to that sound and feel. We released our first demo (tape!) last year and are currently writing our debut album. Hopefully, we will be able to release it later this year. We’re also looking into releasing another Weihan album.

E&D: Over the years, Theudho would appear to have embraced different aspects and themes in the realm of paganism, history and aesthetic representation on the album covers. Has this been a journey for you in a sense?

J.S.: The lyrics have been inspired by themes from all over the Germanic realm, from the Bronze Age to Medieval times; that’s indeed quite a broad range. One could say that the lyrical themes gradually became a bit more obscure as obvious sources of inspiration were depleted early on. The additional issue is that a lot of bands are fishing in the same pond as far as lyrical inspiration goes, so it is a necessity to dig a bit deeper.

As for the aesthetics of the album covers, I tend to prefer actual paintings instead of photographs or digital art. We couldn’t find a suitable historical painting for the When Ice Crowns the Earth album, so that is the only one with a photograph as cover art. Definitely my least favourite one.

E&D: You’ve recently released De Roep van Het Woud on Heidens Hart. What can you tell about this record and its message or concept?

J.S.: The new album might surprise people as it does sound quite different compared to the old albums. The actual material is constructed differently as far as the compositions go. I use different guitar tunings and the philosophy behind the mix has changed, too. It sure sounds more “black metal”; most people seem to agree that this is the best Theudho album so far. This time around I also chose to change the way I approached lyrics. The big change obviously is that all the lyrics are in Dutch. Instead of merely re-interpreting known tales or myths, most lyrics were conceived outside in interaction with nature or historical monuments or sites; trying to see heathenism as a living, continued tradition rather than a dusty literary one.

E&D: As I understand, you’ve done most of the work for this album by yourself. What made you chose to do that? Is it really a practical choice or is there perhaps also a sense of craftsmanship and creativity involved?

J.S.: The main reason is convenience, really. The guys in the last full line-up are great musicians and people and greatly appreciate their contributions, but in general, I like to rely on other people as little as possible. The time was right to return to the original one-man band incarnation of Theudho and just do everything by myself.

E&D: How did the whole recording process and writing of the album take place? Where did you do most of the work and what sort of resources provide you with inspiration and input for the creative aspect of it?

J.S.: I recorded everything at my own place. The writing and demo process was one phase where songs would get written, revisited after some months and then subsequently tweaked, re-written or even discarded. When I finished the demos, I basically only kept the tempo tracks/metronome settings and redid the whole thing with a tighter, smoother and more convincing performance. The actual inspiration comes from a few different places, both literally and figuratively. I travel quite a bit, so there’s always new locations that leave an impression. Next to that, I tend to read a lot, so that offers a lot of new information and insights as well.

E&D: The title translates roughly as ‘The call of the forest’. Now, this may be a metaphorical forest of in general the call of a forest, but do you have a specific forest in mind and what makes it call so strongly?

J.S.: The title of the album is not really meant to be taken literally. It refers to the contrast between the urbanised, Christian world versus untamed nature, which was regarded as “pagan”. The latter was obviously demonised, but ultimately still is the natural habitat in which mankind evolved for millions of years.

E&D: You specifically use the term pagan to describe your style of music. How do you relate paganism to life in this day and age? Is it a look backward or a re-application of ideas and is it more to you than a thematic vehicle for Theudho?

J.S.: It is a philosophical stance in life – I hate to use the word religion because people seem to define religion by the characteristics of the cluster of Middle Eastern religions that dominate large parts of the world today. In the West, the modern consensus seems to be that being religious is synonymous with being intellectually challenged, mentally weak and inept in science, technology, … One only needs to visit countries in the Far East (where people have the highest IQ in the world, after all) to see that this contradiction doesn’t make sense and is unnecessary. It did not exist in Europe in Classical Antiquity for that matter, either.

E&D: As you deal with themes of Germanic history and mythology, you are probably bound to be misinterpreted at times (as seems to be the faith of many bands doing this) or even lumped into the NS category. Has this happened to Theudho and how do you view this matter?

J.S.: Trying to comply with the sensitivities or correcting the misconceptions of others is a Sisyphean task. A much wiser man than me, the Roman emperor Marcus Aurelius, already advised: “How much time he gains who does not look to see what his neighbour says or does or thinks, but only at what he does himself, to make it just and holy.”

E&D: Are there still interesting things happening in the black metal scene today and how do you feel about the whole shift in sounds with more progressive bands moving in different directions?

J.S.: I have to admit that I’m not really keeping track of what’s new and worthwhile. My tape trading days are long behind me, my shelves are bulging as is and I don’t have time to listen to a lot of music. If something survives the initial hype or buzz, I’ll get to hear it sooner or later anyway.

E&D: Which bands from your neck of the woods would you recommend at this time?

J.S.: I coincidentally got the new album of Kludde last week and I would definitely recommend giving it a listen.

E&D: Do you have any advice for those wanderers who are feeling ‘the call of the forest’?

J.S.: “Wit is needful
to him who travels far:
at home all is easy.
A laughing-stock is he
who nothing knows,
and with the instructed sits.”
– Hávamál

E&D: What future plans do you currently have with Theudho?

J.S.: I can’t reveal too much at this point in time, but a Dutch band and I are talking about putting out some music together later this year as a split release. Besides that, I’m working on new material for the next album.

E&D: If you had to describe Theudho as a dish, what would it be and why?

J.S.: Well, that’s an original and unexpected question. I guess horse meat would be appropriate. Why? Christians outlawed the consumption of horse meat because it was a heathen custom. I’m sure it still offends a fair share of people even today.