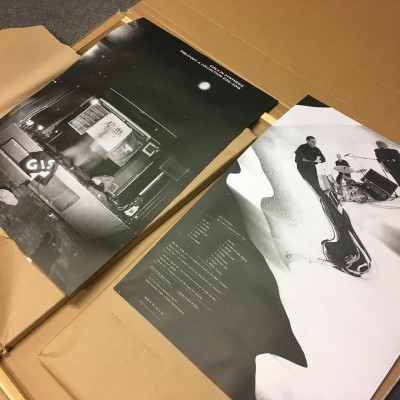 In a world when every news bulletin convinces you the world is run by the sociopathic and the incompetent here is some good news! On April 5 Louder Than War Records are releasing Pre/Post: A Collection 2016-2018, an album of the hard to get hold of first releases by Girls In Synthesis!! Inspired by the early DIY punk and post-punk movements and with a sound described as ‘intense, abrasive, confrontational, and original..yet somehow containing half-caught glimpses of incendiary half-remembered songs that helped bring you to musical life, (that) formed the origins of your musical cosmos’(1), GIS have had four releases so far ‘The Mound/Disappear’, and the EPs Suburban Hell,  We Might Not Make Tomorrow and the 4 track Fan The Flames. That’s 14 tracks of jarring, exhilarating, intense, thought provoking neo punk, of utter relevance to Britain nine years into Tory rule. If you want an insight into UK working class experience in the 21st Century then skip the mainstream media, give GIS a listen! This band engages with contemporary socio-political affairs that the mainstream media would rather you didn’t think about too much as it feeds you distraction, trivia and elite serving narratives. GIS bring you back to reality, remind you that the world is about more than cheap SIM cards and royal babies. Although not an overtly political band (“I wouldn’t say we tackle politics head-on, like some groups do, but we do address it in our own way”(2)). their music engages with anger at suburbia, naivety about hard drug use among musicians (Suburban Hell), nuclear threat, animal rights, US politics, fading youth (WMNMT), elite corruption, greed, arrogance, the experience of powerlessness, precarity, anxiety familiar to so many, the corrosive effects of being subject to, and internalising, the hostilities of society (FTF). Girls In Synthesis are important because they don’t just point the finger, they remind us that we are all infected and that our struggles for truth, reality and justice are as much internal as social/political.

As you listen to the Collection unfold/drive forward you are aware that musically this band started from an extraordinary place with ‘The Mound’ and then kept getting better, with Fan the Flames moving the band on again from We Might Not Make Tomorrow, as they continue to evolve and develop.

To tie in with the Collection release in April, Girls In Synthesis have a short tour, a chance to catch the hallmark elements of ferocity, compassion and intelligence combined live in a way that only they can; more interactive, immersive art installation (2) than conventional gig, a more complete realisation of the DIY (DIT-Do It Together?) ethos than many classic ‘punk’ bands even contemplate. As John has previously commented ‘People come away from our shows having felt something. That’s the whole point. Hate it or love it, we’d rather have a reaction. And that’s what we get’(2).

The people I work with seem to want to listen to retro commercial radio stations whose playlists are musical honey traps of lowest common denominator innocuous familiarity, lulling the listener into a soporific state, so they can be sold to the advertisers, cultural roundabouts always moving but taking the listener nowhere…the musical equivalent of a comfort blanket, ‘Keep Calm and Go Round In Comatose Inducing Circles’. Against the backdrop of late capitalism’s domesticating of so much cultural output Girls In Synthesis stand out like a searing, prophetic burst of uncompromising honesty, like a beam of condensed light, waking you up, reminding you of the importance of art as insurgency. Art as site of resistance, music as cultural resource in the struggle to remember and reproduce reality in a world of disorientating bollocks. If you can get hold of Pre/Post: A Collection 2016-2018 do so, if you can catch them live, be there!

Girls In Synthesis: ‘a dissident soundtrack to the urgent intensity of urban Britain’ (1).