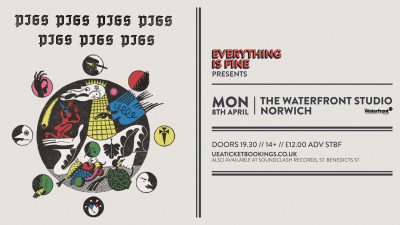 “We feel like those pop stars that you listen to on the radio when you’re on the way to work and that makes us happy,” asserts Pigs x7 lead, Matt Baty, on their Monday night headline at Waterfront to a couple of hundred Norwich fans. I’m front left.

Local Norwich two piece, KULK kick off the show with a barrage of noise rock attacking on all fronts during a methodical onslaught. I cannot stop thinking of the moment when their first drum-hit sent the lead flying into the air across the stage, and I don’t think I will be able to for a long while. The set ended in the smashing of guitar and amp, a suitable finish to the energy that they displayed, for now anyway. There is no doubt that big things will be coming from them in the near future.

Pigs take to the stage. The five members look like they’re on completely separate equally good trips. Some Newcastle FC shorts are spotted and some quips about how a shirt hasn’t been washed in two weeks are thrown around for which an apology to everyone in the front row is followed; no one gives a shit and is already enthralled by the spectacle of their presence. ‘GNT’ begins to ooze off the stage washing a truly animalistic sense of lust and power over the crowd. Baty wraps, twists and bites at the microphone and its cord while shrouded in red light, mist and big hurricane riffs. The swine have arrived.

‘Shockmaster’ is next: “Demons are easy to love” is bellowed into the crowd from a foot-on-the-barrier and vein-about-to-pop-in-the-neck stance. Baty somehow does a good job of keeping himself consistently ever so slightly above the layers of music descending all around him. Everyone in the room plods and head bangs, a journey lead by a monolithic stoner-enthused riffs. It’s back to reality with a snap of unblinking wit as ‘Crazy In Blood’ is introduced as an ode to Jay Z and Beyonce Knowles. Matt sheds the shirt and begins to crawl and stomp the floor, showing some cruel and real emotions.

The band brings down ‘Cake of Light’ and ‘A66’ wrapping almost every song off their most recent album King of Cowards. These songs are met with some huge energy from the crowd as they’re finally snapped from the hypnotic gruelling reality in front of them long enough to realise that this performance might soon be coming to an end.  Adam gives his guitar to a member of the audience and jumps from the stage. The rest of the band depart slowly, then leave the fuzz to settle before turning the kit off and thanking everyone one last time. A seriously amusing, interesting and moving performance, and the best show I’ve been to in a long while. Oh, and let’s not forget the outstanding spoken-word cover of Freestyler by Bomfunk MC’s. Leaving the venue, all I’m thinking about while nursing my ears and brain is when I can see them again. . . x7.