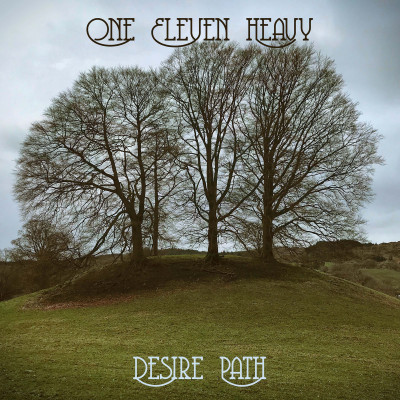 Desire Path by One Eleven Heavy

Man, these cats can play. One Eleven Heavy, that is. The primetime, rib-busting honky tonk jammers pumped full of the old time cosmic Americana. Hitting their stride with their sophomore album Desire Path, they take those once sacred texts that span everything from The Dead to The Byrds and all in between, and slowly turn it into a revivalist meeting for the lost hippies of the highway. Smokin’ indeed.

Superlative introductions aside, lets get one thing straight. There is retro, then there is the kind of retro which simply acts retro for retro’s sake before embracing you in a big old hug and booting your ass into the middle of the spit and sawdust dancefloor as Hans Chew rolls off yet another piano roll from those mean fingers of his. Steady readers of all things Americana should already be versed with the musings of that musician. Here he finds time to have a little extra-curricular action and take it into the stratosphere.

Here he plays yet just a part in the greater picture though, with more than ample gunslinging coming from Dan Brown (bass), Nick Mitchell-Maiato(guitar/vocals) and of course James Jackson Toth (more guitar and more vocals). Just what do you get when you throw together a bunch of guys whose MO is already the best of Americana. Well, you get One Eleven Heavy, man.

From the hoe-down honky of ‘Chickenshit’, through the swampy blues of ‘Hot Potato Soup’ and onwards, there is a feast of delicious music styles here, all rolled together under the spirit of Europe ’72 Dead, pounding out the good old times whilst always searching for that trip. Take the sprightly ‘Stir’ which sounds like The Band being hit by the juggernaut of Sticky Finger’s era Stones, all rollicking riffs and funky jams. This is music which could go on forever, as the guitar spools out its tricks and the storytelling lyrics pull you into a world of good times, bad times, and all other times. It would take a ‘Fickle Wind’ to keep you away, truth be told.

If its cosmic kicks that you are after then One Eleven Heavy are the band for you. Finding a home on Beyond Beyond is Beyond, playing label-mates to that other great jam band, Garcia Peoples, this lot are a lot more home-grown in their approach to music. The respect to the classics is there, as always, but these guys channel back even deeper into the music that was spawned from the roadside bars and porches. There is a deep understanding of everything that has come before, and the dots are joined into a veritable feast of an album. As the strands of ‘Too Much, Too Much’ lead you into yet another boogie, light a fat one, grab a juice, and ride the train to jamsville.