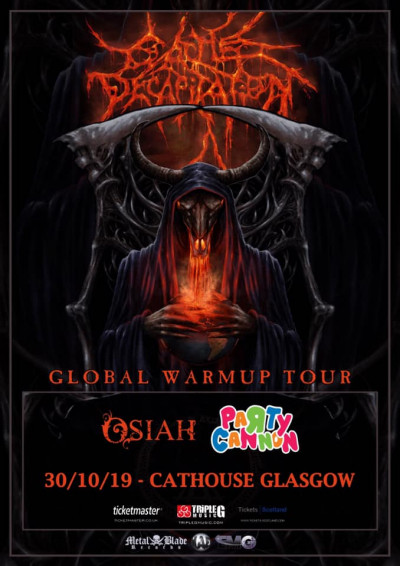 It goes without saying that Cattle Decapitation are one of a kind. They’re a forward-thinking outfit that hit harder than most but underpin their brutality with a globally conscious viewpoint steeped in frustration at every moronic misstep that our species manages to take with each passing day. So why are they so damn enjoyable to watch? Well, that’s what tonight aims to uncover but there are a few steps to take first.

When you have songs about that Pokémon episode that gave kids seizures and you bring along a bin bag filled with balloons to throw into the crowd, it’s safe to assume that you’re not taking this ‘death metal’ thing too seriously. It’s not to say that Dunfermline’s Party Cannon aren’t ridiculously heavy – Tony Reddie has a solid, guttural bellow and a consistently engaging presence while the band have an evident flair for lurching, low-end heavy riffing spiked with enough technical flourishes to keep them from straying into one-note ennui – but it’s still refreshing to catch a band who remember that metal can be entertaining too. Unfortunately, a glitch drum trigger that spends much of their set on an intermittent protest strike kills their momentum and saps a little of their enthusiasm, but they persevere and gain a fair few converts as rewards for their determination. 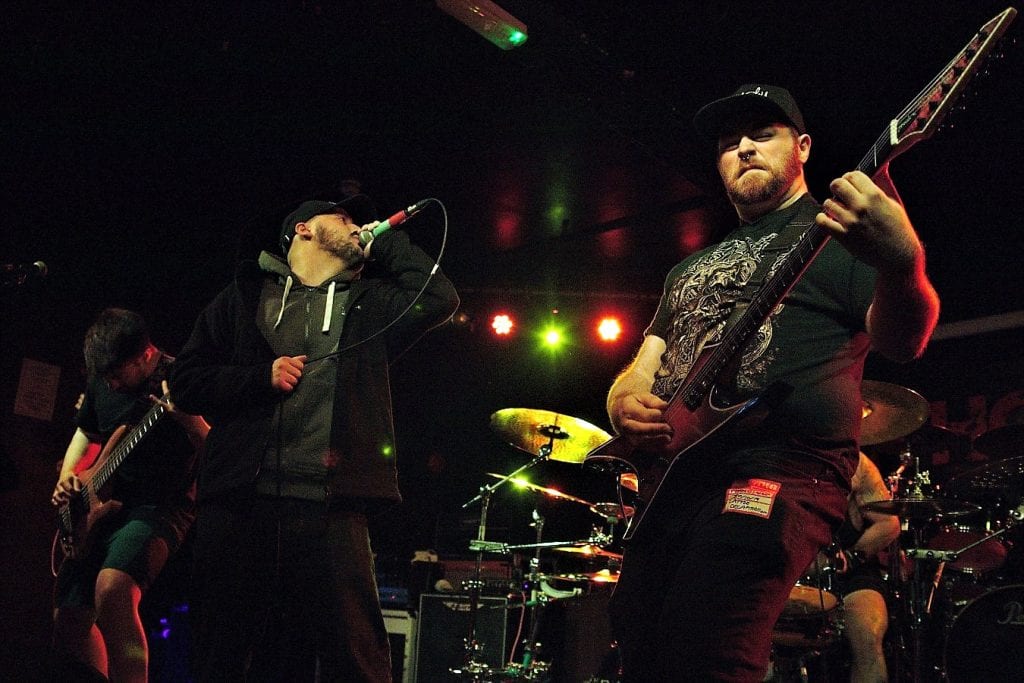 On the flipside, Osiah couldn’t be more straight-laced if they were done up in corsets. Unsurprisingly for a band once described as “the heaviest band in the country”, they’re a hefty proposition, and though they barely dare to stray from the deathcore tropes that have defined the scene for decades, they at least handle the clichés well enough that they can keep even the sceptics engaged as the fans are gleefully ripping the floor apart. Ricky Lee Roper’s predatory stage presence, and frankly inhuman utterances, are part of the draw, and when they get their breakdowns just right, there’s no stopping them; but sandwiched between Party Cannon’s irreverence and the destruction to come, they don’t leave a particularly lasting impression. 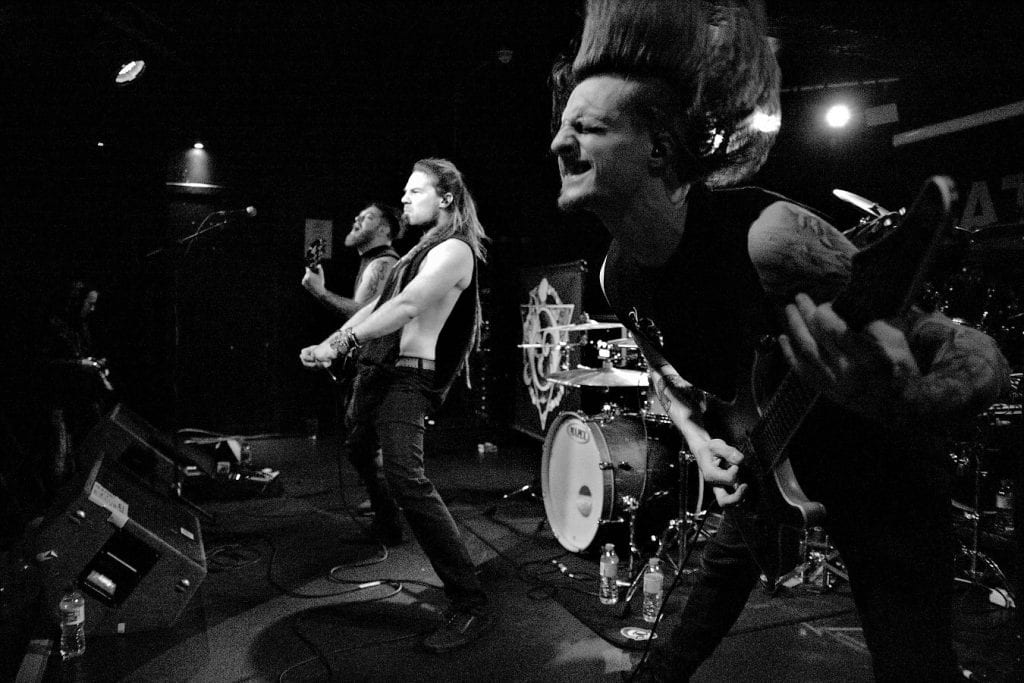 Things have changed a little in Cattle Decapitation’s twisted little world but then again, our own world has gotten a lot more twisted in the past few years too. For their part, they’ve expanded their line-up by adding Belisario Dimuzio as a second guitarist to beef up an already meaty sound, brought Olivier Pinard into the fold to handle bass duties and this month will see the release of their seventh full-length, Death Atlas. Also, they were slapped with a parking ticket earlier in the evening so you just know they’re going to sound extra-pissed, which they most certainly do.

Having long transcended the notion of genre, they’ve evolved to the point where they can do whatever the hell they want and people will still be awestruck. You want massive singalongs? They’ve got them by the shedload, ‘A Living, Breathing Piece of Defecating Meat’ and ‘Not Suitable For Life’ both blessed with soaring choruses that has the crowd roaring along to Travis Ryan’s Xenosapien drawl as the increasingly sweat-drenched frontman moves forward to literally embrace his acolytes. How about ability? Josh Elmore’s breezy dips into sweep-picking splendour are almost infuriating to watch, especially given how easy he can make it look while expending as much energy as he does. 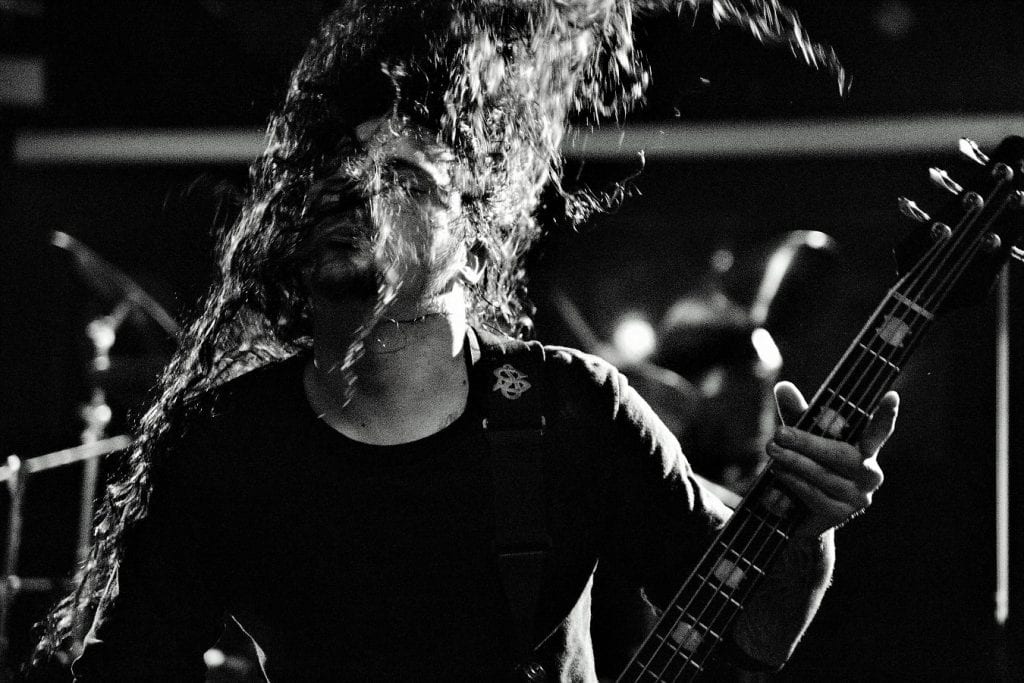 In adding Dumuzio, it feels like they’ve moved up yet another level. His presence opens the band’s sound up even more, complementing Elmore with twinned harmonies and putting a bit more power into the sound which only serves to accentuate Ryan’s vocals, which themselves are sounding great tonight. The set leans heavily towards more recent material but the crowd are more than happy with this – the level of violence on display to ‘Forced Gender Reassignment’ nothing if not fitting (seriously, that video…) but given that Cattle Decap’s reputation precedes them, there’s a sense that everyone has brought their moshpit A-game along as a matter of pride.

In a lot of ways, they’re a band that are continuing to school their competitors. Each cut, every twisting shift in tone feels like it’s pushing against some kind of boundary, and with a closing ‘Your Disposal’, it feels like another push – when was the last time you thought of a brutal death metal track as “majestic?” Despite being so mired in the worst of humanity’s actions, though, they bring the best out in everyone, not least themselves. The overarching feeling is one of positivity, and when that song hits its final doom-laden plateau, you can’t help but feel a little bit relieved that you have this lot on your side. 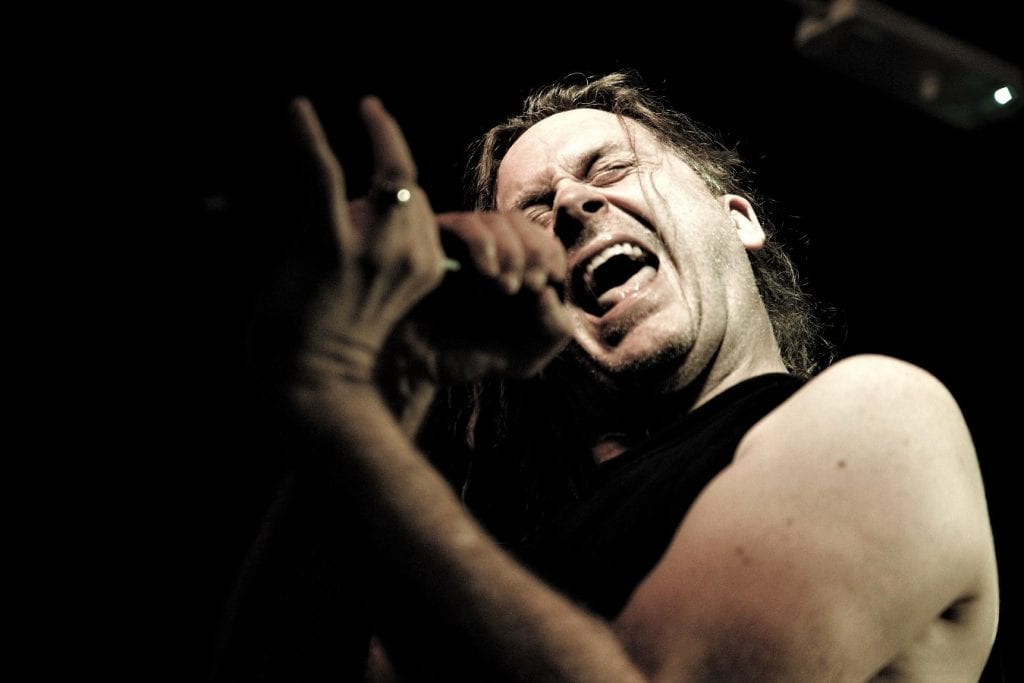 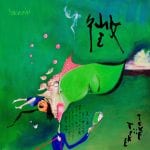