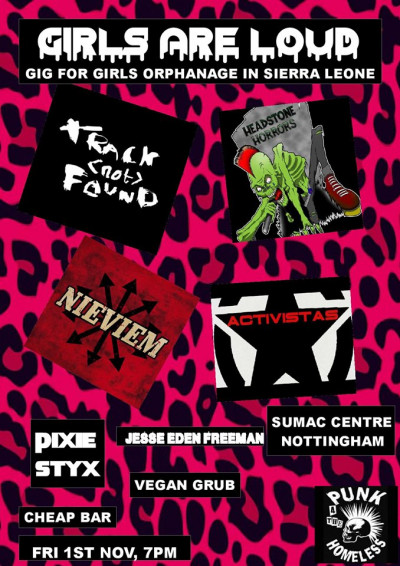 Track Not Found at The Sumac Centre, Nottingham

An afternoon off work, three trains in and I’m reading Hatt and Klonk on Hegelian art theory – interesting but ultimately a load of speculative semi-teleological bollocks really. I’m on my way to Nottingham, to the Sumac Centre to see Echoes and Dust favourites Track Not Found who are playing as part of a benefit gig for homeless girls in Sierra Leone: “getting them off the streets, away from the pimps, and into school”, as someone put it on the night. Twisted East/P4TH had put on Track Not Found’s first UK gig in 2018 and I was looking forward to catching them again.

It’s a fair walk from Nottingham station to the Sumac, and as I wandered past an art gallery, a painting caught my eye; the person closing up turned out to be the artist as well, Lauren Paige. Good strong body of work, diverse, some of it autobiographical, all of it interesting. I took her card. Away from the flagship retrospectives, there seems to a thriving, vibrant grass-roots art scene which is often more interesting than a lot of the big gallery stuff. If you live in the Nottingham area her exhibition, on Mansfield Road, is well worth a look.

The Sumac is as wonderful as ever – a DIY anarchist social centre that revives my hope in humanity ever time I go there.“The Sumac Centre promotes co-operation, non-hierarchy and grass-roots groups promoting social and environmental justice. We are not-for-profit and run by volunteers”. Tonight’s gig is an interesting mix of spoken word and music and kicks off with Pixie Styx. Now, I hadn’t heard of her before so didn’t really know what to expect, but she turned out to be a singer-songwriter of unusual sensitivity and honesty. Normally singer-songwritery stuff isn’t really my thing, but here was a depth, a vulnerability, and an engaging self-deprecating humour that meant the often sobering subject matter was sensitivity presented.  Somehow she balanced the different elements of her set effectively. Really good!

Next up was a local poet, Jesse Eden Freeman, a spoken-word artist and powerful with it, she set about racist, hetronormative. patriarchal capitalism, and gave it a good going over. (Com)passionate and articulate, I would guess her poetry is the distillation of a lot of reading and studying. She returned later in the evening with a piece about the experience of being a woman in a sexist society, living with a constant sense of tension. More men need to hear her. Grass roots DIY progressive politics as poetry – as punk as it gets!

She was followed by Jo and Dickon, doing an accompanied spoken-word set, a compilation of other poets’ work – really good arrangements and quite emotional.

I’ve seen Nieviem a few times now and every time they deliver. The quality control for their gigs is bang on: doesn’t matter where they are, or that they have a new drummer, or how much preparation time they get, Nieviem are always good! And they were particularly good tonight: whether it was the mix or just me but they sounded the best I’ve heard them. Think melodic hardcore, think Rise Against with female vocals. Bart Stanczyk’s guitar playing was prominent tonight as he alternated between quintessential punk riffs and more complex, intricate playing over pulsing bass and drums, while Hope’s vocals were bang on as always. Quality band – every time I see them they’re impressive.

Activistas have continued to evolve and develop into a really interesting thing, from a four-piece into a six-piece and into a really tight band with looser dual vocals over the top. For some reason I can’t really explain or work out, I kept thinking of The Fall, even though there is very little in common musically. Political and bothered with songs like ‘Chip Shop Fascist’ and ‘Boris is a Twat’, they make a terrific “patchwork punk” racket! I saw them a while ago and they’ve moved on hugely. it will be interesting to see where they go next!

Next up was Headstone Horrors from Nottingham. Now, I’d seen their name about but never heard anything by them till tonight, and they were good. Tight, catchy horror-punk, with an energy and panache that made them well worth a watch. Apparently they formed in 2012 and have been playing live since 2013 – it showed, they really are very good indeed. The east Midlands and Lincolnshire seems to have more than its fair share of quality punk bands, and Headstone Horrors are one of the best.

Last up were Track Not Found and I was wondering how they would do after Headstone Horrors’ performance. Stupid of me, of course, because TNF are nothing like conventional punk; they’re out there somewhere doing their own thing: sometimes it overlaps with punk, sometimes with grunge, sometimes blues rock; although you might occasionally recognise a passing resemblance to some style you’ve heard before, they take it all and reconfigure it. All those component parts you think you know have been customised, synthesised with intelligence, wit and bravery to create something new and exciting. Think Kate Bush with a punk sensibility – imagine she grew up listening to Nirvana and Riot Grrrl, hooked up with Natasha Khan and started a band. You remember that phrase about “the future of Rock ‘n’ Roll’? Well it’s here and it sounds very exciting indeed (sorry, Bruce)! They start with the atmospheric ‘Luna’ before they go into ‘Fuck, Fuck, Fuck’, ‘Oxygen’ and ‘Run Me Down’. Their set is made up of a string of inventive, intelligent, nimble tracks that, judging by the response of the people around me, grab the listener and demand their attention. A few tracks later they finished with new single, ‘Everybody Hates Track Not Found’; or at least they would have finished if the guy next to me hadn’t muttered, “That’s next-level stuff”, and started the calls for an encore – we got ‘Code Red’ off their 2017 EP, an excellent end to a stunning set. A year on from their first tour in the UK, TNF have a new drummer, Toby, and have developed musically and visually: Grace was on the newly vacated tables within two songs, and finished the set on top of the drum kit, while Maisie wandered into the audience wearing a surreal pair of feathered angel wings. Catch them live as soon as you can.

Great evening for a good cause. Don’t let people tell you punk is dead – it’s alive and well and thriving in a multitude of forms.