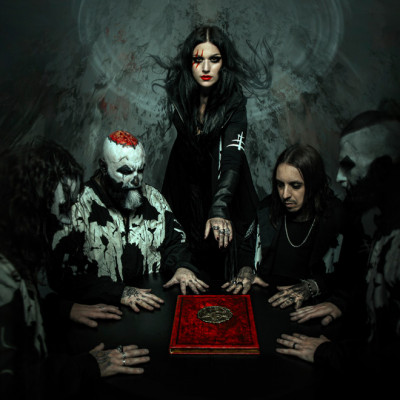 It seems incredible to think that as Lacuna Coil came to the O2 Forum in Kentish Town for the final date of their UK tour, they were celebrating 25 years as a band. The freshness of the sound on their last two albums Delirium and Black Anima (the latter of which they were on tour supporting) in particular does not necessarily conjure up the image of veterans of the heavy metal scene; nevertheless, veterans they are, and the fact that they managed to sell out this prestigious venue, demonstrates that their fan base is just as enthusiastic for their music as ever. The Italian gothic metal act have been enjoying something of a resurgence in recent years thanks to the quality of the aforementioned albums complete with a live show praised by fans and critics alike, so needless to say there was a fair amount of excitement in the air on this Saturday night when the band came to town. 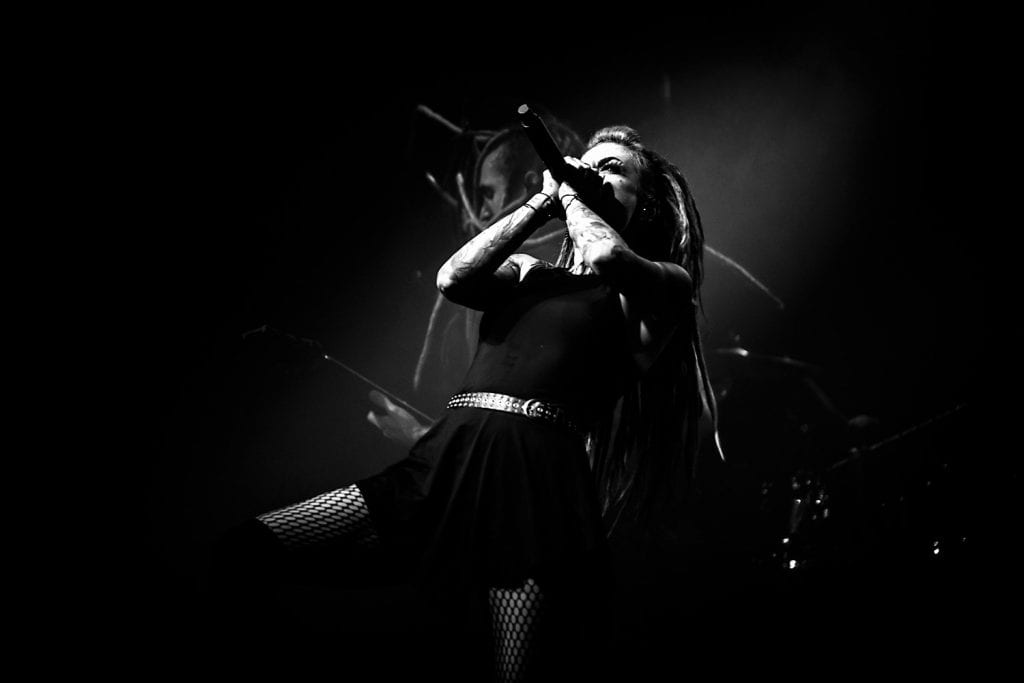 Kicking things off for the evening were Moldovan nu-metal outfit Infected Rain, who were a good fit for a Lacuna Coil support slot. Despite being around for a decade, this was their first time on British soil and they were not about to let this opportunity pass them by; and they provided everything you could possibly want from an opening band. The heavy detuned guitar riffs and breakdowns made the music easy to headbang along to even for those who had never heard their music before, though there were a decent number among the crowd who clearly had and made their voices heard throughout. There was no chance of their voices drowning out that of frontwoman Elena Cataraga however, whose interchanging between screams and clean vocals was terrific; and she did an even better job of engaging crowd, which is no mean feat for the first band on. It was also nice to see a little camaraderie too, as Diego Cavalotti from Lacuna Coil and Jonas Wolf from Eluveitie filled in for absent guitarist Serghei Babici. Infected Rain were a highly successful opening act who will have left many hoping they will not have to wait so long for them to return. 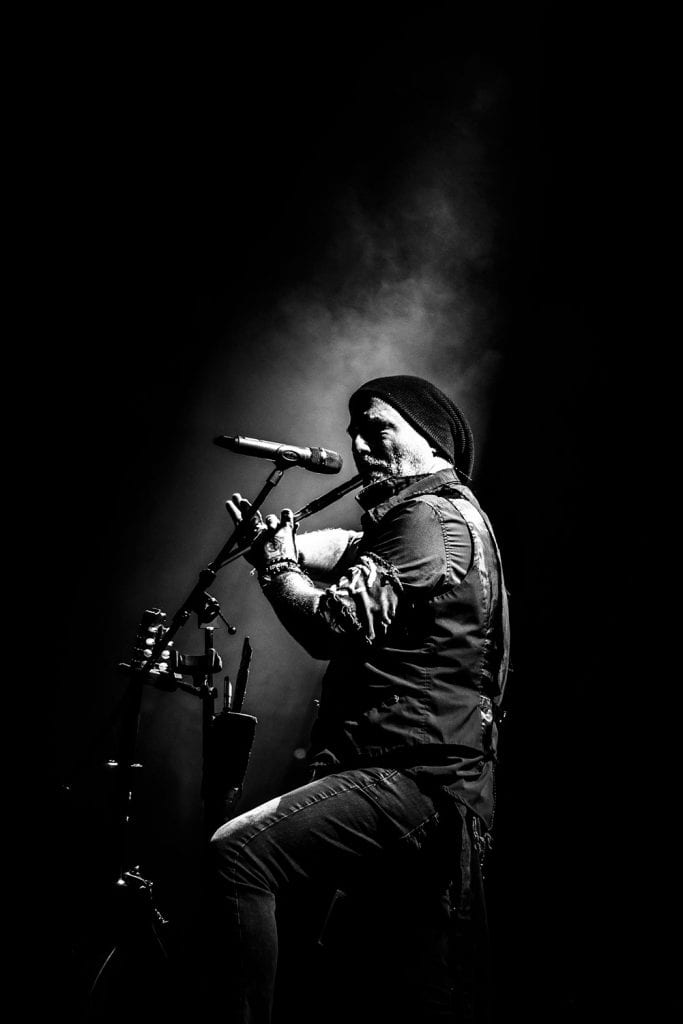 Swiss folk metal stalwarts Eluveitie were next on the bill as the “special guests” for the evening, and unlike their predecessors, they were not as obvious a choice of act for the line-up, and certainly raised a few eyebrows throughout the now full venue; especially when all nine members complete with traditional instruments such as harps, whistles, violin and hurdy-gurdy in addition to the standard guitars, bass and drums took to the stage. They had, however, brought a fair number of their own fans to the evening who were keen to see them after only one UK date in the four years prior to this tour. Eluveitie’s performance was perfect for pleasing their fans and converting the rest, as they made full use of the hour-long slot they had on stage. This gave every one of the nine members time to shine, but the focus was primarily on singers Chrigel Glanzmann and Fabienne Erni whose harsh and clean vocals respectively were perfectly combined to get the maximum effect out of both old and new songs from their set-list. The best thing about seeing Eluveitie live is that there is so much variaton in their music: there really is something for everyone, and the band got just as good reactions from the blisteringly heavy songs like ‘King’ and ‘Inis Mona’ as they did their softer numbers such as ‘Breathe’ and ‘Call of the Mountains’ (which they performed in their native Swiss German, much to the delight of the crowd). Whether they had been fans prior to the show or not, a large number of people in London this evening would leave eager for any future news of an Eluveitie headline tour. 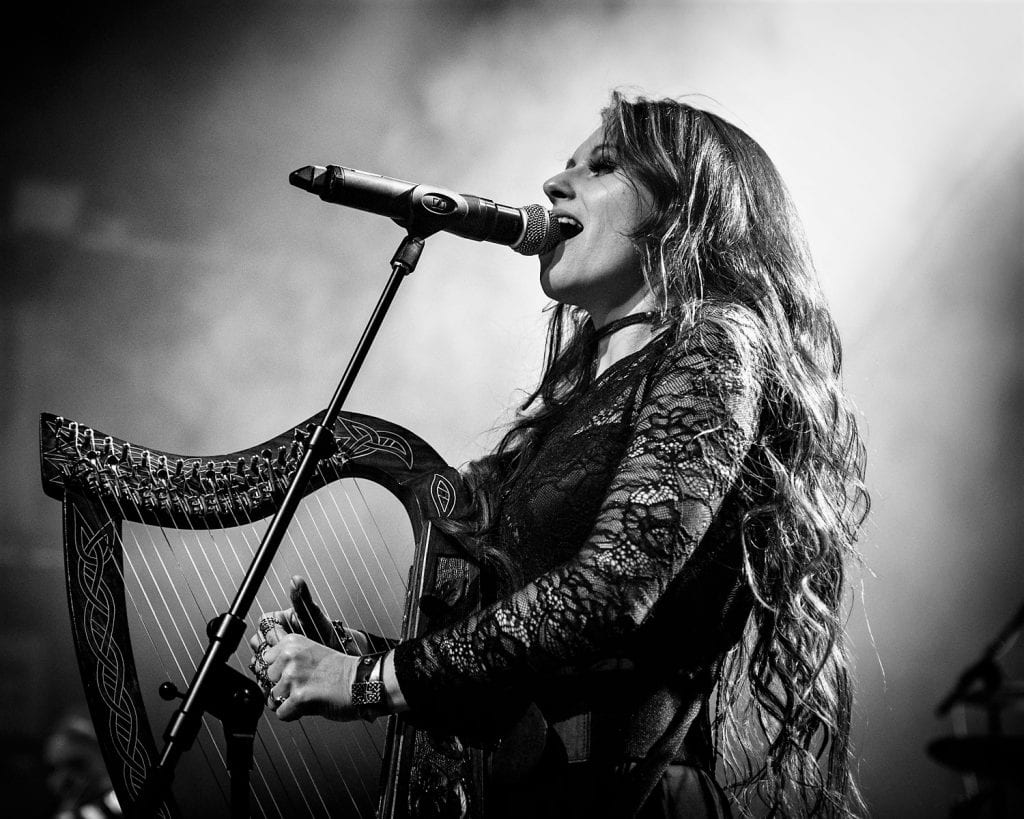 Despite the quality of the first two bands on the bill, Lacuna Coil were not about to let themselves be upstaged. Following a lengthy prelude to build the atmosphere in the room, the band took to the darkened stage in black hoods and gothic horror make-up with maximum theatricality. They soon set out their statement of intent with ‘Blood, Tears, Dust’ which immediately gives them an excuse to go to the heavy side of their spectrum and completely fill the room with sound. Even at this early stage of proceedings, it is clear to see what a formidable duo vocalists Andrea Ferro and Christina Scabbia make, as they feed off each other and compliment their unique sounds perfectly. The band doesn’t let up, going immediately into ‘Trip The Darkness’ from 2012’s Dark Adrenaline record, which keeps heads throughout the crowd banging in unison and is another chance for the lead duo to show off their incredibly powerful vocals. The sound that Lacuna Coil are able to create through just three instruments is quite something; guitarist Diego Cavalotti, bassist Marco Zelati and drummer Richard Meiz lock in together expertly to ensure that the music resonates and the songs are given the power they deserve. Cavelotti and especially Meiz are new additions to the line-up, making this all the more impressive. 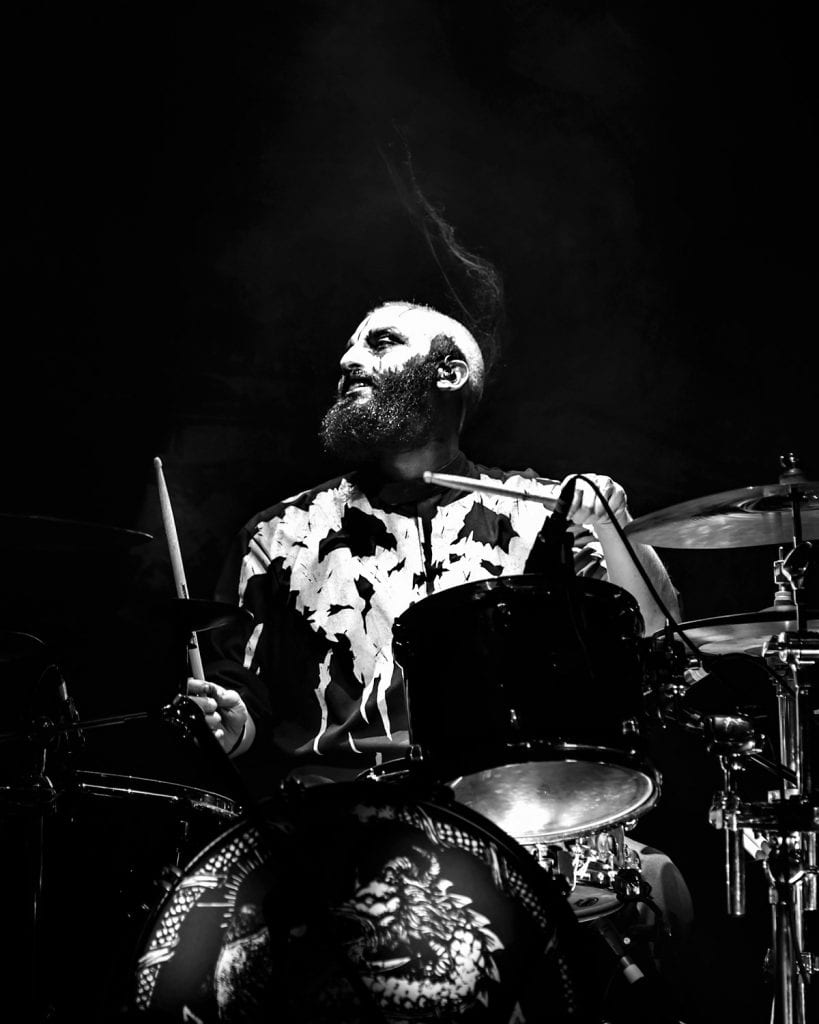 The night is all about promoting their most recent release Black Anima, and the set featured songs from the album pretty heavily with the new material going down very well indeed. Even those who had not had the chance to get to know the new songs that well were nonetheless thoroughly entertained by the performance, and again credit has to go to Ferro and Scabbia for this as they can leave the instrument playing to the other three and spend their time taking up as much of the stage as possible, creating a tremendous blend of intimacy and theatricality. The crowd were also given plenty of opportunity to add their own voices into the mix, especially memorably for their cover of the Depeche Mode classic ‘Enjoy The Silence’, which provided a rare moment for the band to delve into their earlier material. This ended the main part of their set, but they were soon back onstage complete with Santa hats for a rendition of their single ‘Naughty Christmas’. As much as I normally do not condone anything Christmassy going on in November, they can be forgiven in this case for not taking themselves too seriously and injecting some real fun into the show. 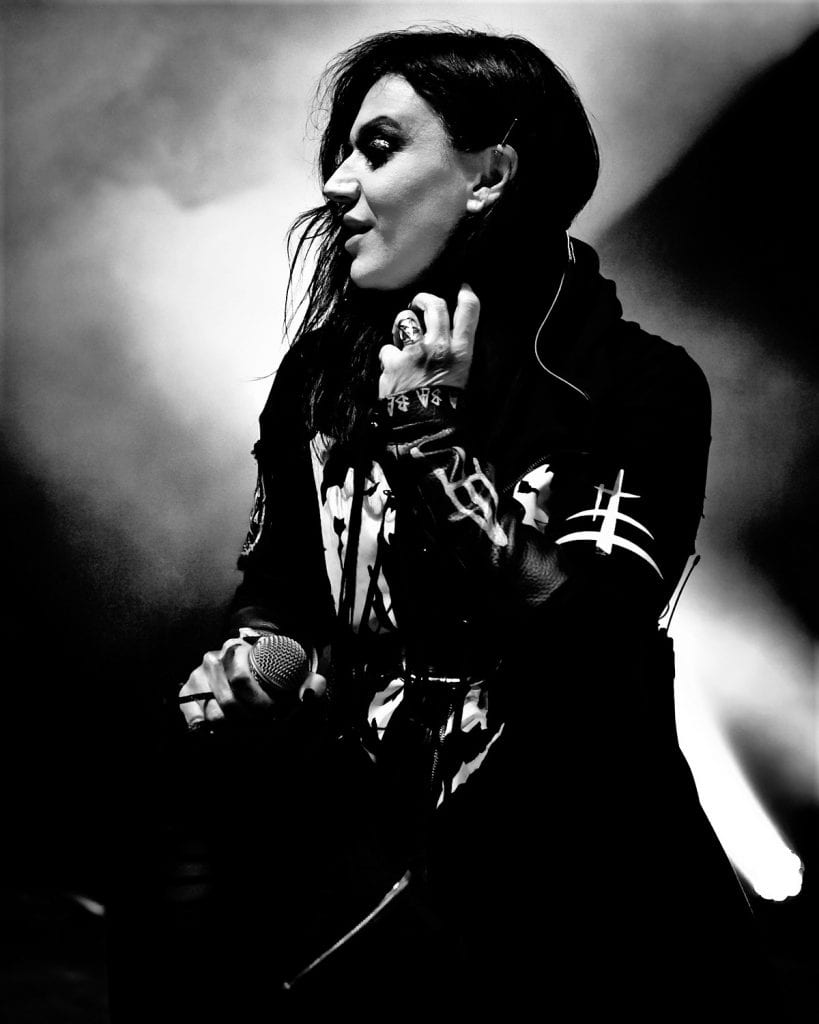 There was still a little bit more to go however, and I was particularly please that they included a live debut of their song ‘Save Me’ from Black Anima, not least because it was an amazing display of vocal prowess from Scabbia combined with the crushing yet harmonic guitars which categorise the latter stage of their career so well. They ended on an uplifting note with ‘Nothing Stands in Our Way’, which leaves the crowd feeling as though all the power and energy of the music had been imparted into them. Lacuna Coil gave a fantastic display of how to combine many disparate influences and musical ideas into a coherent sound and performance which leaves the crowd wanting more. In a live setting, they are able to blend stage presence with great musicianship; at a stage where many bands struggle to have any impact on the scene that made them in the first place, Lacuna Coil continue to redefine expectations and use their experience to carry on pushing boundaries as well as entertaining their fans. 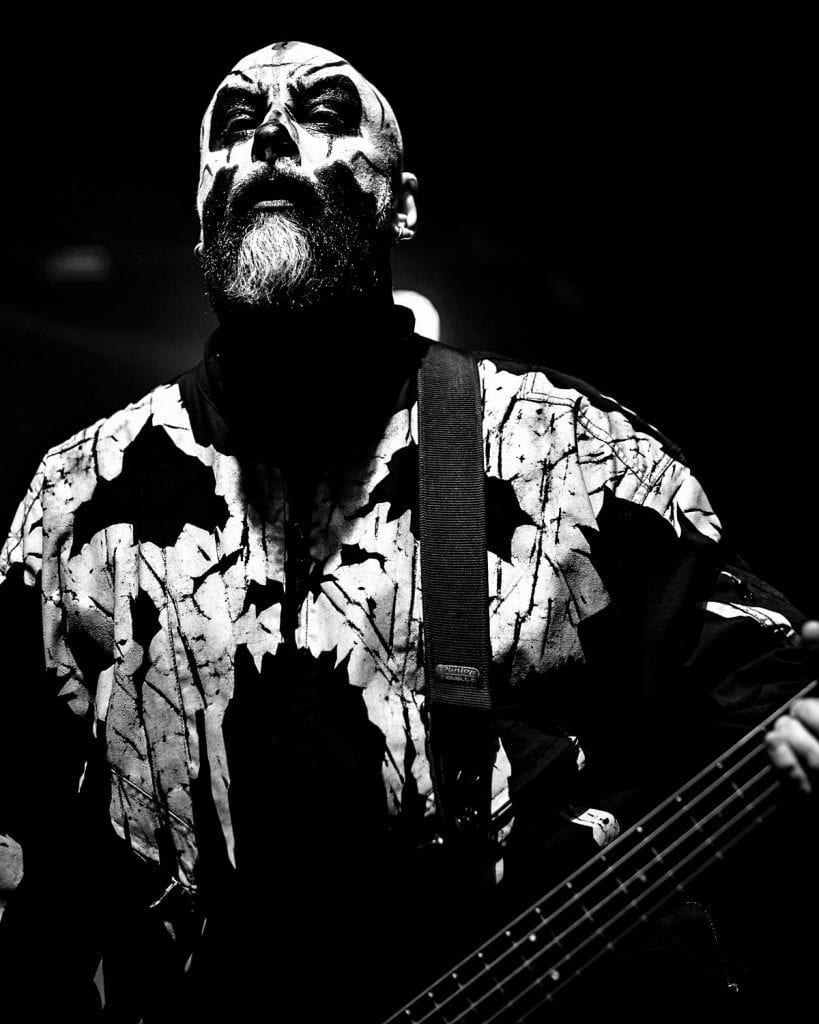