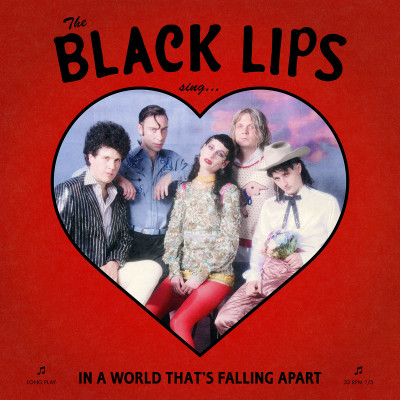 Sing In A World That's Falling Apart by Black Lips

Black Lips are back after three years! They are newly signed to Fire Records and ready trudge in the Atlanta dirt from the unique and brooding edges of the garage rock plateau. There’s something gripping about their ability to surprise an audience with their dark and sometimes controversial mix of irreverent humour and thoughtfully entertaining narratives.

This record sees them shapeshift yet again, moving away from flower punk inspired songs to create a new mix of refined pastiches from a broader genre pool. The record is recorded direct-to-tape in true DIY style and full of rootin’ tootin’ American country tips of the hat. The signified change in direction for the band might have been influenced by the departure and addition of a drummer and vocal guitarist.

‘Hooker Jon’ kicks open the saloon doors with filthy lyrics and a fistful of groovy guitar hooks. The intoxicating tone is set for your ears from this point onwards. ‘Rumbler’ jangles a harmonica led ballad which warms up the engine for an emotive joy ride in true Black Lips style. It tells tall tales of solving hillbilly crimes, crashing police cars and getting hired by a special GI unit after getting a badge confiscated. It’s a stereotype of the southern United States which is utterly absurd and somewhat believable.

‘Gentleman’ pleas and toils with the preconceptions associated with the band and contemplates the idea of detachment from these labels. It starts as slow as it is woozy and breaks down into hoarse screams and wails of frustration in the latter half of the song. It’s clear there is a whole lot of love and hate going into creating this sound.

There’s big guitar lead country roots and American clichés pouring out all over this thing. It certainly has a misplaced nostalgic enjoyment. This album didn’t provide as much of the dangerous, wild and quirky lyrics that lend so well to Black Lips’ personalities. It was however an effortlessly cool listen, all the way from the first burp to the final flick of the tongue. With Sing In A World That’s Falling Apart Black Lips bring a kind of chaos for reform that mimics the insanity and squalor around us.