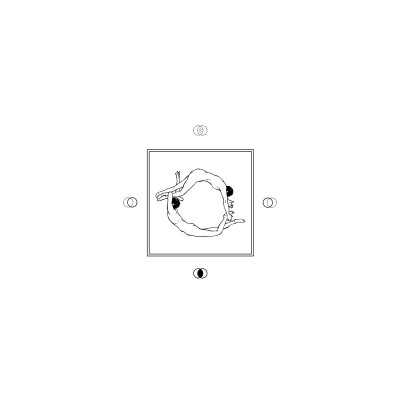 According to a certain culture website, which will remain nameless, guitar music died in the 2010’s. Well, there must be a few British bands who didn’t get the memo because there has been an almost constant stream of interesting bands, blending genres and creating captivating heavy music over the last few years. Amongst them, Earth Moves, from Brighton release their third album Human Intricacy. The band are hard to pigeonhole, there are aspects of blackgaze, post-metal, screamo and some straight up black metal thrown into the mix. The bands second album is ambitious both sonically and from a composition perspective. They move from peaceful and minimalist too full-on noise onslaught throughout the record. Vocalist Jordan Hill is unrelenting, his vocals have always retain an edge of emotion regardless if his is screaming or clean singing. The band play off each other creating an interesting dynamic and keeps things interesting.

The album opener ‘Falling Away From the Ground’ is rich in abrasive guitars with equally abrasive vocals. Some melodic lead guitar colour the often bleak track. The short track leads straight into ‘Into the Ether’. Layered guitars create a blackgaze-style style track. Screamed vocals become more melodic on the chorus before the track descends into minimal, shimmering break before exploding back to full-bore noise. Jordan Hill’s vocals are impressive, he carries a certain raw emotion in his singing but also yelps and growls with the best of them when needed. In ‘Other Voices Other Rooms’ Hill’s vocals pierce the thick guitars and give the track urgency and pace. On ‘Catatonic’, in contrast, they are softer but without losing that emotionally tinged edge. This track sounds like it was written about something that means a great deal to someone, the emotion is unabashed. On both these tracks the bass and drums are given a bit more space to breathe. On the latter furious bass drum underlines certain parts of the song. The, frankly stunning track, builds to a noisy crescendo.

The tracks vary in length from just over a minute to over 8 minutes, which strikes me as a bit odd. Both ‘Catatonic’ and ‘Their Eternal Home’ that band allow themselves to build and develop a track and both tracks are allowed to blossom. ‘Their Eternal Home’ ranges from pared-back minimalist too full on sonic maelstrom. I felt this was missing from some of the earlier tracks. ‘Genic’ see a stark turn to a more straight up heavy track, guitarist, Sam Ricketts, shows that he can serve up some chunky, de-tuned riffs when required. The album ends with another mini-epic ‘Embody’.

Human Intricacy is an interesting album, worthy of a place amongst the various modern, British, heavy bands. The band have been ambitious and sought to convey a range of feelings. They use aspects of different genres to paint various pictures in their music, never getting predictable in a genre that often can be prone to one-dimensionality. Special mention should also go to producer, Joe Clayton (NØ Studios), he has the uncanny knack of capturing the essence of bands who play heavy, noisy often complex music.