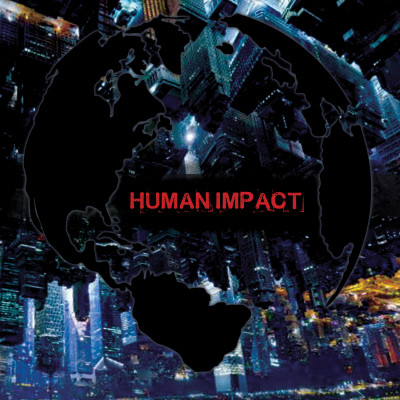 Human Impact is a super-group of sorts with members of Cop Shoot Cop, Unsane and Swans. These bands have all achieved great things in their own right and Human Impact in a way is a distillation of the unique character of each band. From the overt, fatalistic nihilism of Cop Shoot Cop, the ballsy, hard-edge riffing of Unsane and the unsettling heart of darkness at the core of Swans’ sound, all are audible in this album. And yet all features are muted compared to the original bands. It’s not a belter in any sense: the riffing is solid, the vocals are urgent but not furious, and the melodies are minimal and understated. The members of these bands got a little older, combined their talent and their wisdom and created an album of mature tunes: akin to a firm and guiding grip on the shoulder rather than the smack in the face they would have handed out 20 years ago.

A lot is made of the fact that all three bands come from New York City. The gritty mugshot of the band standing out the back of some building on a city block shows the grim set of their jaws and the harshness of their surroundings. The cover of the album is an inverted photo of a city skyscape falling down onto the globe, a wall of spikes advancing towards the citizens below. The impact of humans on other humans and our world. At a time when humanity is under siege from an invisible threat, when all we have is each other, while also being cut off from so many, this seems particularly poignant. COVID-19 was not necessarily caused by humans (although there are theories that our impact on the environment does affect the evolution of pathogens), but we are currently imprisoned by the built environment around us, and so Human Impact feels like a timely release.

Highlights include ‘E605’, with Chris Spencer’s solid yet plaintive vocals over a brooding, jangling bassline. Phil Puleo’s stellar drumming leads the quieter yet no less powerful ‘Portrait’ and the intro of ‘Cause’ is pure Cop Shoot Cop – with its angsty, feedback-driven melody. The music speaks for itself and insinuates itself into your brain on repeat listens. This album really does get its hooks into you – I’ve found myself humming the melodies even after a few days of not playing the album. Human Impact is an album made by noise rock royalty and deserves a listen. Self-isolate, download and feel the noise.