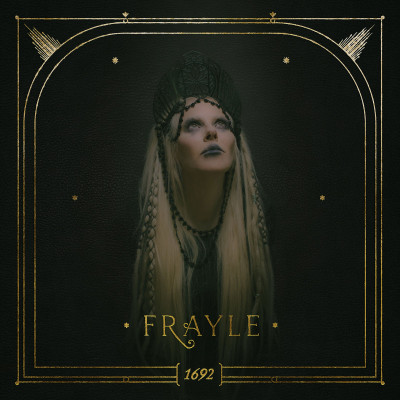 Cleveland-based stoner/doom band Frayle are fairly new to the scene, being formed in 2017. They are the brainchild of guitarist Sean Bilovecky and vocalist Gwyn Strang and make a beguiling mix of thick and heavy doom with Strang’s haunting and frankly beautiful vocals. In 2018 they released their debut EP, The White Witch, which was well received by critics and fans alike and got them support slots on various tours and a record deal. The band, now expanded to a five piece, have developed and grown their sound and released their debut full length record 1692 this year. The band themselves describe their music as lullabies over chaos, which is a perfect description of their music.

Strang’s lyrics are intensely personal and cover heartbreak, anger, frustration and resolution and her vocals often breathy and soft have a pop-like shimmer. The backdrop is thick, multi-layered, heavy, stoner-esque fuzz that drives the tracks along. The album opens with a short introduction, at once we hear the extremes of the band’s sound, on one side the saturated distorted guitars and on the other Strang’s haunting vocals. The band cite Portishead as an influence and the similarities with Beth Gibbons’ vocal style are very apparent.

The first full length track ‘1692’ has a patient, almost slow pace, Bilocecky’s guitars, heavily saturated and on the edge of feedback and are barely restrained. It has a feel like it could explode any second but the pace remains patient and understated. ‘Gods of No Faith’ picks up the pace a little, guest vocals from Jason Popson (vocalist of fellow Clevelanders Mushroomhead) add a wonderful dynamic, his caustic scowls add an interesting contrast and make it a stunning track.

Sludgy riffs and slow drums open ‘Darker than Black’ and Strang’s vocals are soft and chant-like, it sounds like some kind of occult-themed nightmare. The rhythm picks up mid-way through but as before, the track simmers gently. ‘Burn’ is a lot more sparse, syncopated drums and a minimalist guitar track span the first few minutes, the track flourishes briefly with some dense and layered guitars for the chorus. Both guitarists control their instruments wonderfully, feedback is used to build the tension before louder sections. ‘Godless’ has a similar pace and feel, distant vocals add a dreamy quality, the track teases a crescendo a few times but instead builds slowly with additional layers. The tracks reveal more on further listens, some of the earlier tracks such as ‘1692’ and ‘Gods of No Faith’ grab the listener early on the later tracks need some time to appreciate.

The last two tracks move away from the stoner/doom feel to a more shoegaze/black gaze sound. ‘If You Stay’ has a little more pace and urgency. The heavy guitars are pared back and the shimmer and melody is allowed space and ‘Stab’ is just guitar and vocals and is an interesting diversion from earlier tracks. Both of these tracks Strang’s vocals are brought to the foreground which gives an overall slightly more melodic and dream-like feeling.

1692 is an excellent debut, the band have taken from a wide variety of influences to create something quite unique. The chemistry between Strang and Bilovecky is evident and despite being at somewhat different extremes sonically it works wonderfully well. At times it feels like the mix is a little flat and the dynamic range is not quite there. This is music to get lost in, it is passionate but restrained and probably best listened to in a dark, possibly haunted, castle, during a thunderstorm.