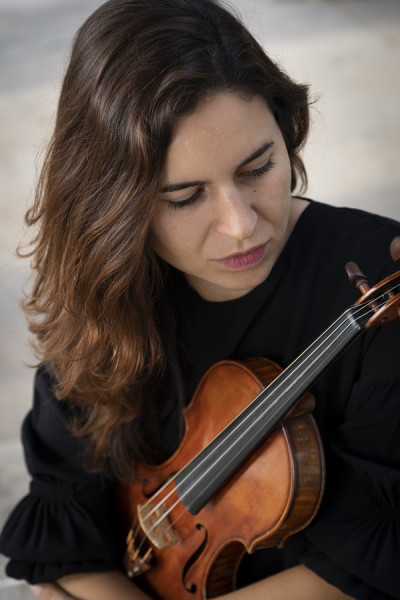 I read a story of a Venetian sailorman who, a hundred years ago, spent a spring in quarantine on his ship in a port; he concluded by saying: "this year I lost the spring but it blossomed inside of me“. This sentence was so inspiring that I started playing again and feeling the vital energy of the world and nature, the strength of human beings and the beauty of life itself.

Laura Masotto is an incredible and accomplished violinist and composer. I first heard of her and her music when she released her single ‘Our House is on Fire’ via Lady Blunt Records. The track blew me away with its emotion and intricate layers where classical meets new-age electronics. She’s currently working on her second album so I thought it would be a great time to interview Laura and find out more about her, her recent and upcoming releases, the new album and more.

E&D: What made you want to get into music?

Laura: It happened naturally, within the walls of my home: my mother played the accordion and my brother the piano. At the age of 5, I was obsessed with The Four Seasons of Vivaldi so my parents enrolled me in a violin class at the local music school. My dream as a child was to become a violinist and a chef: I became a violinist who relaxes by cooking. I believe the world of music is made up of many microworlds. I started from the classical world which contains the history of music and I believe it is important that a musician studies it. I could not be a musician without it. Then I explored the worlds of Jazz, Punk-Rock, Electronics until I found my music, the one that was inside of me and which I wanted to compose and perform.

E&D: What inspires you to write?

Laura: I’ve always written the melodies for many projects in which I played and was involved in, but in spring 2018 something new woke up inside of me. Life surprises you with new paths and you just have to embrace them. I took all the love of that moment and recorded it. That’s how my first album Fireflies was born.

I’m sure things happen when the time is right. We’re often in a hurry and under economic pressure but certain things like arts need the time to mature and have to go out when at the right moment. I waited 30 years to make my first record because I didn’t feel ready before and I’m glad I had this patience.

E&D: What has been the biggest challenge you’ve had to face in your career so far?

Laura: Probably my biggest challenge is to play the violin: it’s a continuous challenge. Before making beautiful sounds it takes at least 10 years of deep study, after which you still need to study, every day. And then comes the search for your own sound, which can evolve and exist only if you keep on training and rehearsing. After that, I had to learn how to record the violin and my sound, and also how to interact with my emotions while performing live as the sound of the violin is a very balanced momentum. Last but not least I had to learn to play such a special instrument by living those emotions that arise from music, without letting the search of sound and perfection become a limit.

E&D: One of your recent singles titled ‘Our House is on Fire‘ released via Lady Blunt Records, was inspired by Greta Thunberg and her work. Can you tell us a little more about that? Did you get to meet Greta? Do you know if she listened to your single?

Laura: Greta is a really precious person for this century, I have a lot of confidence in the new generations and I admire the courage she had in spreading such crucial messages and energy.

One day I heard one of her speeches. It was particularly strong and powerful, she looked like a wounded fawn with the grit of a lion screaming that our house was dying.

I’ve never met Greta but I’m glad she exists: she represents a sort of modern “Joan of Arc”, as she is dedicating her life to such a noble cause. I don’t think she has listened to my piece but I hope my energy will come to her in support to her strength.

E&D: You also worked on a special release for Lady Blunt Records titled ‘Mediterraneo’, a collaborative release dedicated to the Mediterranean Sea. Can you tell us about that project and what it meant to you?

Laura: Mediterraneo is a music collection curated by Lady Blunt Records to celebrate its first year of life. It is a compilation of original music composed by 15 artists and it encompasses a broad spectrum of modern-classical music, as it contains strings, piano, electronic, kalimba, experimental guitar and even ondes martenot. The artists involved are Philip G Anderson, with whom I have collaborated in the piece ‘Waves’, Christine Ott, Jim Perkins, Fiona Brice, Ceeys, Snowdrops, Lorenzo Masotto, Daniela Savoldi, Anna Yarbrough, Eleuteria, Cabeki, Glowworm and Luca Longobardi. The Collection offers a message of hope, expressed through music. Mediterraneo is a tribute to a sea that suffers, that is now the scene of profound human and ecological drama. All proceeds from the project will be donated to two Italian NGOs involved in the Mediterranean Sea, both on the environmental side (MareVivo Onlus) and the humanitarian side (Mediterranea, Saving Humans).

Being involved in the Mediterraneo project was like diving in a wave. I always felt a strong connection to the sea and being able to support it with this project was important for my personal path. I believe that music has the power to send very strong messages to humanity especially when they come from a sincere place. What was special of this project was that it felt like every artist really engaged, they all dived into different seas.

E&D: I read that you are working on a solo album which is an experimental exploration of violin, viola and electronics. Can you tell us more about this release and when fans might expect it? Will you be using synths and/or pedals to fulfill the ‘electronics’ side of things?

Laura: The core of my new album will still be strings but this time fused to the more contemporary, analog sounds of synthesizers. I’m using a Prophet and a Moog for that kind of sounds and pedals connected to the strings themselves.

In June I’ll be releasing a new single for a String Collection curated by 7k!, which is a Label that I really appreciate: the track will tell a bit more about the road I’m taking for the new album!

E&D: Being from Italy, can you tell us how the COVID-19 pandemic has affected you and your music? What can fans do to help during this time?

Laura: Thank you for the inspiring question, Adriana. In January I was in India for a gig and media were starting to cover the Covid-19 theme. I had deepened my research about it as I was going to travel in Asia and I immediately realised that the situation was far more dangerous than it was presented. Last winter I was based in Barcelona for an artistic residence while the epidemic was spreading in Italy. In Spain nobody was taking security measures, it was obvious that something bad was going to happen. When I realised that the pandemic was happening, I returned to Italy: the same day quarantine began and flights from and to Spain were suspended. I wanted to be in my country during such a difficult time.

The musical impact of this situation has been diversified: while I was in Barcelona and the bad news started, I recorded some horror-movie-like tracks. I was terrified and angry and you can clearly hear it in the music: I’ll probably never use those tracks, they will only be my personal memory of that moment. When I arrived in Italy I recorded a song that contained all the sadness that I had inside for the victims and the pain surrounding us.

I also had a block at a certain moment, I couldn’t play for an entire week, I didn’t really want to touch the instrument, I needed silence. And I accepted it. A few days ago I read a story of a Venetian sailorman who, a hundred years ago, spent a spring in quarantine on his ship in a port; he concluded by saying: “this year I lost the spring but it blossomed inside of me“. This sentence was so inspiring that I started playing again and feeling the vital energy of the world and nature, the strength of human beings and the beauty of life itself.