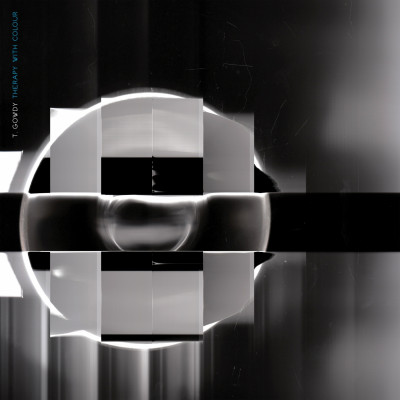 Therapy With Colour by T. Gowdy

T. Gowdy might well refer to his work as “ambient electronic music” but Therapy With Colour does not sit cosily amongst the gentle washes of new age ambience. This isn’t a soundtrack for a chill out room, a relaxing spa-meditation, or suites for a yoga retreat. It’s an altogether different creature. One with sinewed muscle and matted fur. It’s gritty and physical, tapping into lizard brain fight or flight responses. It is music to bare teeth to, to push back against or begrudgingly succumb to. There’s a quivering pressure throughout, a sense of vibrating unease. It agitates as often as it soothes. The therapy doled out here isn’t from leaning back and admiring a gentle watercolour, it’s cathartically thrashing through life’s hardening experiences. Now, that might all sound a little excessive since this is an instrumental album largely concocted out of bleeps, beats, and treated synths but, beware, for a snub-nosed edge lurks beneath the fluffy sheep skin veneer.

It all begins so innocently, with lightly peppered pads prancing about like playful butterflies. Swooping and spiralling in and out of focus. A low drone rises up over the relief of the land, filling out the pleasant electronics like radiating rays of a cool winter sun. A joyous skitter. But that persistent bass tone seems to signal something more disconcerting than flighty weightlessness’ With little fanfare the sun morphs into a tenebrous and pregnant storm cloud.

There is tougher territory still to come. Album closer ‘Excavating Air’ is an impatient finger tap of a track. With fidgeting synths and rhythms that wriggle and pulse, it’s like the crawling skin and greased sweat of someone going through withdrawal. Similarly ‘Up CTRL’, with its manic click track, amphetamine trails, dripping palms, and chest-arcing heartbeat of a kick drum feels akin to 2015’s Berlin-based, one-shot film, Victoria. The stakes seemingly ramping up higher and higher as the narrative unspools.

But it’s the second track, ‘Depse’, that should set alarm bells going off. A mighty kick thuds alongside a dragging loop that appears to clamber up and over itself. Syncopated rhythms that weave in and out of synchronicity, creating anxiety and then relieving it. Somehow giving a sense of being caught in the midst of an abusive relationship. Disparate sounds are gradually lured into the carefully constructed framework, threading these elements into a well-weaved electronic ride. A build up towards strobing excess. It’s the sonic equivalent of agreeing to do a couple of seemingly innocent requests that then ratchets up into something far darker and demanding than you originally signed up for. Before you know it, it’s 3am, the walls are sweating, and people are stripping off layers of latex.

Perhaps this does, in fact, mirror therapeutic practice. Gowdy gradually returns us time and time again to the same themes, to the same ground, to the same landscape, slowly peeling back individual layers in order to experience it once more but from a different perspective. Until that which you thought that you knew becomes something glaringly different from what you initially believed.

Nowhere else is this more evident than on the penultimate track. With its teeth-gritting bass onslaught it’s oddly reminiscent of the pain/pleasure trance-inducing paradox experienced under Gnod’s live spell. That burnt around the edges, bone-strummer of a bassline feels like a sonic saw cleaving through reality. A deep sea dredger carving into the Mariana Trench whilst staccato drums dawdle and dither behind it like the tin cans of newlyweds. The tones at the surface seem cheery enough but its those darkened elements lurking far below that seem to tell a different, far more paranoid, tale. Just when you expect its claws to rip right for the jugular, it peters out as if having sucked all of the life-force out of its surroundings.

Spend time with this album and you’ll encounter a rigid gristle that refuses to budge. It howls through unprepared soundscapes, sneaks in through Trojan chords and hijacks innocuous rhythms to jarring effect. After the third or fourth listen it becomes clear that the welcoming smile, spread across the exterior of these sounds, is masking something sinister that writhes beneath. Dare you delve deeper and face up to the coiled growl that exists within all of us?