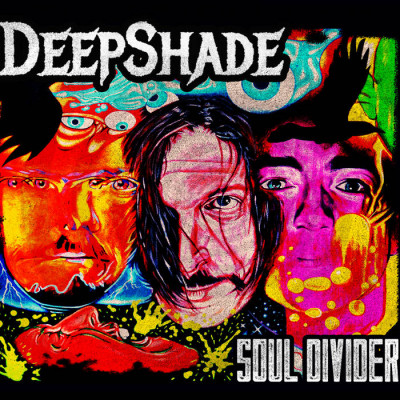 It’s been a five year wait for Wigan’s Deepshade to follow up their 2015 debut album Everything Popular is Wrong. Though for this reviewer I approach Soul Divider as my introduction and newly found awareness of the band after hearing one of the lead off singles on the excellent newish guitar music based Feedback Radio. On Soul Divider, the band – David Rybka on guitar/vocals, bassist Tom Doherty, drummer Paul Barlow, and Fran Lydiatt on keys – clearly have a multitude of tastes and influences which feeds into their music as they jump across many varied sub-genres on the album’s ten tracks, and on occasions all within the same song.

Soul Divider is a melting pot of 90s rock with flourishes of epic classic rock, psychedelic, garage, and progressive rock, but comes wrapped in a fresh sounding up to date modern production re-boot. They are a band who recognise the benefits of the loud/quiet song-structure formula and partake in this for the-majority of their songs.

Album opener ‘Airwaves’ has Amplifier’s dexterous guitar touches for the quieter passages while they throw in a Pearl Jam grenade for the loud explosion effect. They go the extra mile on ‘Monster’ which takes the reward for having both the mellowest and the loudest passages all within the same song, as fellow Seattle legends Soundgarden’s densely heavy blasts shakes you immediately from the feet up and chill out moments. While the title track mixes in the latter’s all-consuming heaviness embellished with psych flourishes.

Pearl Jam are arguably the band I recall the most and ‘Burning Up’ brings-to mind the legendary Seattle outfit consistently across one song, but Fran’s lysergic keys sounds and whooshing effects adds a blend of their own tea leaves into the brew.

There are times they journey too close to their idols as ‘Sad Sun’ main refrain smacks of Velvet Revolver’s ‘Slither.’ But, the thing about Soul Divider is while you can instantly tell who has inspired Deepshade to pick up their respective instruments and form a band (and that’s no bad thing as, let’s face it, every musician is inspired by something), there is a freshness and innovative creativity to what they do – the curveball ‘Lonely Man’ floats on a wave of French electronica pop duo Air sailing with Achtung Baby era U2- that they eventually win me over.

Deepshade do know how to rock and when they do just go for broke these do form the album’s instant earworms. ‘City Burn’ is a rollicking rocker with deft touches of keys. But they save the best to last as album closer ‘Ganzua’ is a deserving epic album highlight. Everything on ‘Ganzua’ sounds huge. It’s a beast of a song, as they go for a consistent heaviness. It has Alice in Chains dirty grungy swagger blended with Led Zeppelin’s ‘Kashmir’ tinged grandiose.

Soul Divider has an arena filling sound quality about it supplemented by a production which allows the songs to breathe. You also have-to admire Deepshade’s confident vision and musical stretch-ability. It is hard not to like an album when all the afore-mentioned bands are some of my favourite rock bands. So, if you’re a fan of Pearl jam, Queens of the Stone Age, Alice In Chains, Soundgarden, and Porcupine Tree then this may be worth you to lend your ears to. The big question is can the band develop their own idiosyncratic charms, longevity, and body of work of those 90s rock legends. Time will tell, but Soul Divider is a good album in its own-right.