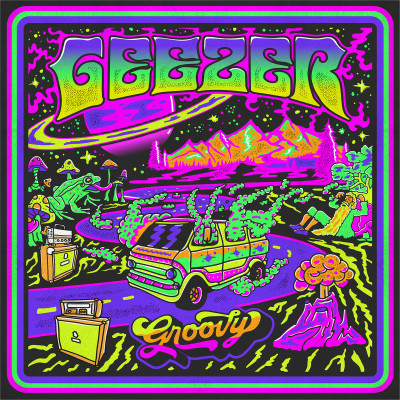 “I’ve got a feeling I’ve got to groove”, declares vocalist/guitarist Pat Harrington on the title track of the fourth album by the Kingston, New Yorkers Geezer. The album title – Groovy – reveals their intentions are indeed to groove guided by their blend of heavy trippy bluesy stoner rock. A band who hitherto are mostly associated to the jam as a path for achieving their sound. These songs were indeed formed from the band spending a year jamming out ideas, but this time around the band – Pat Harrington, drummer Steve Markota, bassist Richie Touseull – decided to whisk into shape from those jams a set of songs to showcase their concise song-writing chops.

There is no doubt Geezer know how to conjure strong melodies as a handful of these songs are as bright as the album cover. Have a look; shades are indeed an eye protective requirement. The album opens with the sound of Steve’s drum rhythm to get the hips a shaking, as ‘Dig’ clarifies the album title is not a false promise, with a proper generous slice of the cowbell. “Can we dig it?”, asks Pat as a robust fuzz drenched catchy riff is hard to shake off, while Pat reminds us “We got to live for today”. It’s a good lead off song that after several plays does indeed dig into your collective mind and becomes an infectious little bugger. And there are indeed more of these pesky, hummable tuneful songs.

In fact, the first six out of the record’s eight songs are all wrapped around irresistible guitar riffs and hooks. ‘Atlas Electra’ swaggers like a swampy stoned ZZ Top as the guitar melody radiates brightness and warmth. Geezer take you lyrically down a tad on ‘Dead Soul Scroll’, “I feel like a target, I feel all alone”, but Pat informs you to “follow me down” and eventually “we’re going to get down” as the band pick up and swing towards the end helped along by Pat’s bluesy riff, which sounds like it has been through a Louisiana swamp backwards.

The music always retains a jumble of upbeat 70’s rock and a swampy stoner rock vibe. Another influence you can hear on Groovy is the Washington DC hard rockers Clutch, especially their earlier work. But, where Neil Fallon and his rhythmic DC sound attackers love to zip along at a speedy pace, in comparison Geezer opt for a mid-tempo plod, like very contented middle-aged men leaving a good restaurant. I do wonder if Geezer could put their foot on the accelerator and let rip occasionally, but that may just be me being finicky.

Along with ‘Dig’, the other two songs which bloom glowingly are the insomnia titled ‘Awake’, and the title track’s upbeat earworm 70’s singalong rock strut. I’m certain the latter will be great for playing aloud while driving along a glorious sun soaked coastline with the wind in your hair, and the optimism of good times ahead.

Grooving comes in different tempos and ‘Slide Mountain’ drifts in easily like a mellow Sunday morning. While Geezer round off their homage to the groove by letting their older jamming tendencies out of the bong for the heavier nine-minutes, slow staggering ‘Black Owl’. The last two may not be the record’s earworm highlights, but they bring a familiar cloudy stoner haze into proceedings.

It’s fair to say Geezer are not breaking any new ground. They leave that to other bands, but they seem to know their limitations and work within those very effectively. The change of approach to the main bulk of these songs has proven a good idea well executed because Groovy is an enjoyable, likeable record.