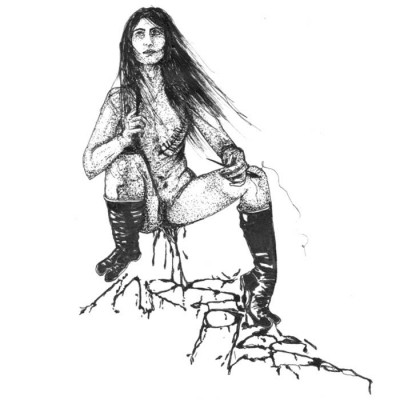 Now this is a band name to make you stand up and take notice – Mrs. Piss. A name to suggest this is going to be uncompromising, raw, and will throw any rule book up in the air and out of the window. Well, the great news is, it does indeed match all the above expectations, and more.

This is a side project by Chelsea Wolfe and a collaboration with her long-time friend and musician Jess Gowrie. Both were in their first band together Red Host, and they were both reunited again when Chelsea invited Jess to join her band for the making of Chelsea Wolfe’s Hiss Spun album. It was indeed on the tour supporting that album in 2017 that the seeds of Mrs. Piss took route.

To take a line from a long quote from the press release, Jess states ‘’how freeing it is to not give a f-k and to just create.” And that nails what lies within the wax, or my case the digital download, as the innovation and visceral energy explodes across the eight largely short burst of songs.

Self-Surgery is a glorious melting pot of Sonic Youth’s open mindedness to song-writing, Industrial metal influences, 90’s Noise rock, all laced with a tenacious Punk spirit. But as Chelsea nails it perfectly in the press release its ‘our own weird sonic vision’.

You know you are entering into-something dark with the odd electronic distorted 44 second opener ‘To Crawl inside’ with Chelsea declaring “I’m bathing in the filth of the world“. Before ‘Downer Surrounded By Uppers’ rages, thrashes, twists and contorts like a punkier and speedier Melvins, supplemented by Chelsea’s haunting siren vocals. The attacking rhythmic stabs of Jess’ drumming drive forward Chelsea’s grungy guitar on ‘M.B.O.T.W.O.’ highlights strongly they are firing on all cylinders.

Even when they slow the tempo down, on the grinding chug of the longest song ‘Knelt’ at just over four minutes, and the slow surge of ‘You Took Everything’ the projection of anger is still there and menacing. While the outsider vibe continues with ‘Nobody wants to party with us’, its electronic hum and thrum underpins it all-across the numerous tempo swings.

Self-Surgery is a visceral, urgent, and compelling whirlwind of a creative force. A diverse approach to heaviness driven by an idiosyncratic punk energy that is fresh and relevant. It is a short, but thrilling ride, which leaves you wanting more. And according to their quotes in the accompanying press release, their intention to invite female musicians on board for further endeavours is something to look forward to.