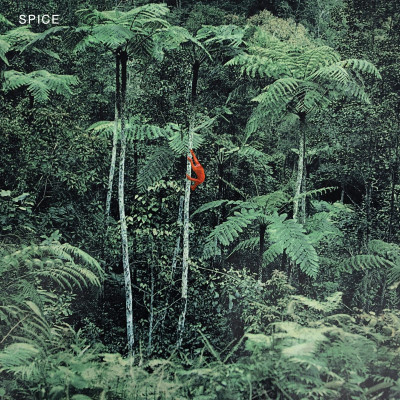 It’s been a while since 2 singles have set such precedent for pure anticipation than with ‘First Feeling’ and ‘All My Best Shit’, the opening tracks from the debut outing from SPICE, a project formed in 2018 rooted in the North Bay of San Francisco. Produced by US hardcore-adjacent stalwart Sam Pura (Self Defense Family, The Story So Far) and with the infinitely diverse Dais Records putting it out, the undeniable line-up including members of Ceremony, Sabretooth Zombie and Creative Adult was bound to hit upon something wholly unique. No record of this ilk this year has packed in so much explosive, raw emotion in a 25 minute runtime.

‘All My Best Shit’ establishes an addictive level of cathartic energy, achieved through Ross Farrar’s vocal expression of the mundanity of repeated failure; “all my best shit keeps falling apart, again” – a hook that digs in and holds on from the very first listen. The mid-tempo haze leans on the likes of Catherine Wheel and Guided By Voices but captures its very own sense of urgency. ‘Murder’ follows suit but at a break-neck pace, a rising power-pop anthem with a brittle guitar lead that drives to a bleeding climax of Victoria Skudlarek’s violin and Jake Casarotti’s driving drums.

Prior to the album’s centrepiece interlude ‘VO The Night’ is easily the hardest hitting cut that Spice forges on the slow burning ‘26 Dogs’. A marriage of gorgeous balladry and post-punk starkness, it’s the album’s most to-the-bone demonstrations of affliction. Plodding drums provide the foundation to echoing guitar leads as Farrar repeats “26 dogs are barking at me” in a tension of unrest and discomfort.

There’s almost an unavoidable notion of relevance to the trying year that 2020 has been on ‘I Don’t Wanna Die In New York’; it’s perhaps an unintentional ode to the feeling of perpetual uncertainty in one’s day-to-day. On the albums overall themes of expressing pain, the band stated “parsing out which side to expel can prove arduous”, and this closing track hones in on that notion effortlessly. With a restrain on the hook that adds to Farrar’s desperation, the guitars and drums pound and swirl to eventually meet the track’s somber, string-led finale.

SPICE’s debut is pretty much flawless; a rock record that feels equal part hopeful and solemnly exposed. In a future of pure musical speculation, a band like this continuing on to release records would be a warm and welcoming certainty.