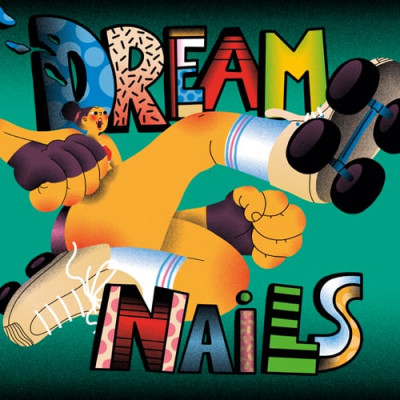 Pushed back from spring to the end of August London punk witches Dream Nails‘ self titled debut finally arrives in a bright tangle of righteous anger and fizzy head rush pop songs. The 2020 horror parade has run over just about every band’s plans for the year and left them crumpled in a puddle but it feels especially unfair that this great summer record has been kept indoors with its face pressed up at the window. Still, I expect they’ll take it in their ebullient stride and just get down the park and kick some autumn leaves about.

‘Jillian’ is an infectious giggle of a song about coming out, having a crush on an internet fitness coach and idly daydreaming of going on holiday to “stay in a luxury villa” together. As (some of) the nation works out in their front rooms to dispel lockdown lethargy perhaps it’s more timely than it first appears. ‘Swimming Pool’ is a hyper summery tune that’s excitable to the point insipid, somewhat undercutting the ‘punk witch’ tag but then I don’t really care for swimming so much. The new single ‘This Is The Summer’ neatly encapsulates the band’s approach. A bright indie punk stomper it starts out wondering at the seasonal heat in small talk style before connecting it to global warming and the death drive of late capitalism, “Displacement, migration and no reparations, We’ve got twelve years left to fix civilisation.” They do this lyrical heavy lifting with ease, so I guess all those work outs with Jillian paid off.

Dream Nails have toured with Petrol Girls in the past and maybe it’s easy to get the idea that they’re a raging force of feminist punk. Which they are, sort of. There’s more humour than anger in their music but mostly a potent mix of the two. ‘Corporate Realness’ is a bratty scream about how your job sucks but doesn’t define you. ‘Text Me Back(Chirpse Degree Burns)’ about anxiously waiting to hear from a crush. There’s a strong band identity here but enough variety in their tunes and lyrics to suggest multiple voices, maybe they all write together, I don’t know. ‘People Are Like Cities’ is a real gem, a touch more poetic and wistful, with a lovely unfolding melody.

The record is littered with skits that introduce and illustrate the songs. I’m usually a fan of that sort of thing and they’re all different, they’re all fine, but the songs are so short I find it interrupts the flow. Using the magic of modern technology you can skip ’em and there’s a definite added momentum. On the other hand the opening ‘Affirmations’ tells you a lot about them in a matter of seconds. It sounds like the band in the rehearsal or dressing room, all repeating a statement of self belief while being unable to take themselves seriously and yet holding onto both those ideas equally. The energy they radiate is empowerment not grievance, a sense of strength in community. These aren’t protest songs, more songs of identification and celebration, of shared joy and pain.

That they generally get serious issues across with such lightness of touch makes ‘Women and Non-Binary People To The Front’, a live introductory snippet to ‘Vagina Police’, stick out as a bit shoutily sloganeering. Then again, this year we’ve all been amused and horrified by angry dudes who were upset to discover Public Enemy or Rage Against The Machine had political opinions, so I suppose it’s best to be completely clear. Tom Morello is apparently a fan and they work in some RATM dynamics on the chants and chewy bass line of ‘Payback’ a threat of retribution for male violence. Rage against the patriarchy.

They save the best for last though, going out on a defiant high. ‘Kiss My Fist’, as the introductory news snippet makes clear, was provoked by the assault on Melania Geymonat and Christine Hannigan on a London bus last year. Goaded and then beaten by their attackers in a high profile but depressingly not uncommon incident. A sparkling mix of Girls At Our Best and the Au Pairs the song smartly draws out the contrary prurience and panic of lumpen hetero attitudes before gleefully yelling “we’re gonna eat your brains!” Brilliantly blending retribution with b-movie zombie horror into probably the most fun song about hate crime you’ve ever heard. They end on the empowering chant “you fear us more than we fear you.” Righteous.