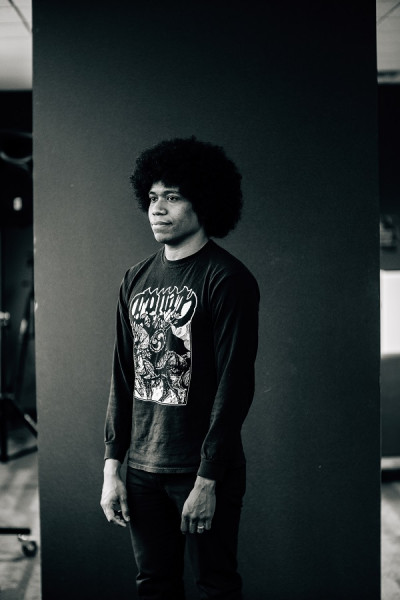 I think a lot of BIPOC are held to higher standards in the metal scene, and our authenticity is sometimes questioned or seen as a gimmick, especially in areas of the world where diversity and exposure to other cultures are nonexistent. I want to see us continue to crush those standards and make the music we want to make without question.

Sometimes the internet works its magic and before you lies a tweet or a post that includes a link to some incredible music. This is the case with the music of Atlanta-based multi-instrumentalist Jonny Warren. I stumbled on his project known as KUYASHII on either the first or second month of Bandcamp’s Bandcamp Friday. I was hooked from the start and I’ve been listening to his music ever since. I boldly contacted Jonny via his Instagram page and asked if he would be interested in doing an interview with me. He graciously accepted.

(((o))): Unbelievably, KUYASHII’s is a solo project. I say unbelievably because your music is so full and rich. Do you play all the parts yourself or when recording, do you enlist other musicians to join you?

Jonny: Thanks! Everything is played by me except for the drums which are MIDI programmed. I use a lot of layering in my music, so often times songs will have 3-4 individual guitar parts that pick up a melody where another has left off, sort of like relay runners.

(((o))): What made you start KUYASHII and how did you come up with the band name?

Jonny: KUYASHII came about in 2017 as a way to get back into music writing after focusing solely on visual art. The band name was inspired by an episode of Chef’s Table featuring Niki Nakayama. In the episode, she uses the Japanese word kuyashii to describe her burning desire to succeed despite being put down by others. Nakayama’s adversity of growing up in a culture where the role of women is to support men and having the determination to prove herself as an independent chef in a male-dominated profession really spoke to me. I wanted to make music that reflected that feeling of frustration and determination.

(((o))): When did you start playing music and what instruments did you first learn to play?

Jonny: I started out taking piano lessons when I was 5 and did that for about 10 years. I played clarinet in 5th and 6th grade, and in 7th grade, I convinced my dad to buy me a bass guitar. In high school, I played bass in the jazz band and vibraphone in the marching band. During those years I picked up a guitar, and that’s when I really started writing my own music.

(((o))): Did you always know you wanted to play instrumental post-metal/post-rock/shoegaze music?

Jonny: Not initially. At the time I started KUYASHII, I was listening to a lot of bands that fit that mold, and I wanted to explore similar sentiments in my writing. Since then, I’ve soaked in other influences and use what best fulfills the concepts I’m building. With being an instrumental project, I really wanted to let the instruments tell a broader story that the listener can understand based on their own perspectives.

(((o))): Are there any particular bands that have been most influential on you and your sound?

Jonny: Boris have been a huge inspiration of mine. My first exposure to them was when New Album was released, which I think a lot of long time fans would consider atypical for the band. The fact that they have the freedom to experiment with a wide range of concepts and still be true to their heavy rock core is something that I aspire to. Sound-wise, bands like Russian Circles and Sannhet have been hugely influential for me in terms of pushing the boundaries of what an instrumental band can accomplish musically.

(((o))): Who are your biggest influences as a musician?

Jonny: Tosin Abasi is someone I really look up to. Representation is a huge thing for me in the metal scene and seeing other musicians of color with a lot of support in this community and have successful careers is always beautiful to see. Another influence of mine is Manuel Gagneux of Zeal & Ardor. I love how he took an insult when requesting genres to combine for a music project and turned it into a fully-fledged concept, fusing black metal and African-American work songs.

I think a lot of BIPOC are held to higher standards in the metal scene, and our authenticity is sometimes questioned or seen as a gimmick, especially in areas of the world where diversity and exposure to other cultures are nonexistent. I want to see us continue to crush those standards and make the music we want to make without question.

(((o))): When was the last time you played a live show and do you miss playing shows? Do you think we will ever get back to playing live shows?

Jonny: The last time I played a show was as a guest guitarist for Nadia Marie last summer. I had plans to figure out how to bring KUYASHII to a live setting this year and find other musicians but that has since been postponed. I do miss attending shows more than anything. I will say it’s awesome to see bands evolve out of necessity to perform online concerts. It seems that will have to be the norm for now, and I hope more bands have the support they need in order to perform digitally until we can fully return to live venues.

(((o))): How have you been keeping busy during this lockdown period?

Jonny: I’ve been writing a lot of music and trying to build up my online presence as KUYASHII. I just put out my 4th release of the year and I’m continually working out song ideas through short videos I’ve posted on Instagram. I’m also in the process of building a parts guitar to pass the time. It’s been super fun dreaming it up and sourcing individual components to really make it mine.

(((o))): Taking into account all the gear you have, which two pieces of gear could you not live without?

Jonny: Having had most of my gear stolen a few years ago, I’ve had to rebuild my collection. A positive side is that it cleared the way for new improvements that I couldn’t quite justify without duplication. The first item is a Keely Electronics Loomer fuzz and reverb pedal, inspired by My Bloody Valentine. It’s been an integral piece in previous releases, and it’s a blast to play with. Another item would be my Applause by Ovation AE28 guitar. It’s the first guitar I ever bought and holds a lot of sentimental value being the early spark for writing music.

Jonny: I think if a wall of reverb and delay works, it works! I respect artists who push boundaries without fear and can navigate back to the edges to present a sense of cohesion.

Jonny: For the rest of 2020, I’m working on a music video as well as a couple of playthrough videos. I’m also working on early concepts for another full-length release in early 2021 as well as shopping around for physical release options!