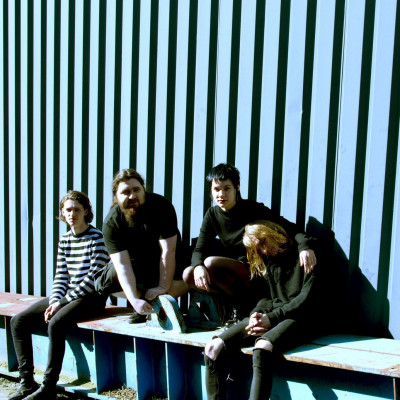 SØWT is a noise-rock band, featuring the frustrated youth of the Eindhoven music scene. Expressing ourselves using strong personal lyrics, freaky screams and heavy sound explosions. We try to create beautiful melodies that get ripped apart by the horror of our daily existence. Our music shifts between the dissonant and the pleasurable, the gritty and the polished, the passion and aggression and the calm and cool.

I first discovered SØWT after they were recommended to me by Bob de Wit, who was the mastering engineer for my band, Burden Limbs’ debut EP There is No Escape as well as Gnod’s Chapel Perilous…he is also a producer and engineer for Radar Men From The Moon, Mudhoney and a host of other great bands. Bob knew the band from Eindhoven and sent me a video them playing one of his Isolation Sessions, I love anything raw, intense, brooding and emotional, so I was sold straight away. I was really intrigued by their dual vocals and generally, I enjoy their sound so, I decided to do this interview to try and put some spotlight on them and generally satisfy my curiosity, so, without further adieu:

(((o))): For the benefit of people who don’t know you, who are SØWT? Who are the band members, what do you play and where are you from?

SØWT is a noise-rock band, featuring the frustrated youth of the Eindhoven music scene. Expressing ourselves using strong personal lyrics, freaky screams and heavy sound explosions. We try to create beautiful melodies that get ripped apart by the horror of our daily existence. Our music shifts between the dissonant and the pleasurable, the gritty and the polished, the passion and aggression and the calm and cool.

Danielle Warners – Danielle plays the bass and sings. (if you can call it singing at least). Being born and raised in Eindhoven she cares a lot about the cultural state of the city, thus tries being mildly involved in amazing places like Stroomhuis and TAC. Coming from a background of listening to mostly punk, her musical interest expanded more to a gritty 90’s sound. These two major music inspirations created the sound and role she now has in SØWT.

Jesse van Eiken– Jesse plays the guitar and sings in SØWT. Born and raised in a city that shall not be named (Helmond). But soon enough he was born again in Eindhoven and fell in love with the music scene there. He started working in the Effenaar as a stagehand where he started to expand his music taste through music festivals as Fuzz Club and just seeing a lot of great artist like Shellac and bands like A Place To Bury Strangers. If it wasn’t for our fellow friend and studio engineer Bob de Wit (who introduced him to de Effenaar) from The Super-Nova Studio he wouldn’t have been at this place where you can so easily expand your music taste and see so many new amazing bands.

Koen Verhees – 2nd guitar player in SØWT. After a long time of playing in several bands and being involved in the Eindhoven underground scene as an aspiring sound engineer/record producer. Already being good friends and colleagues before being asked to join the band last year, the logical answer was an immediate yes. Now working closely with Bob de Wit at The Super-Nova Studio and engineering in a few of the most beautiful venues of Eindhoven he is inspired to keep the scene alive and play sad songs.

Wouter Mollen aka De Graaf–  We actually recorded our first EP Junkies Boneyard in at studio bosrand which is Wouters studio, this is where we created a bond, after releasing our first EP our old drummer Joey van Leeuwen left the band and Wouter was one of the first people who came to mind and he joined us not long after. It clicked really fast musically so we decided to record the new album with him on drums. Wouter recorded some of our favorite albums like: Serieuze muziek voor Guido Segers in A by Tsar Bompa, also the well-loved Two People Holding Hands by Tjalling and All the Shards by Ellenor Vora.

(((o))): Also, for reference, how is your name pronounced is it like “soft” or is it said differently?

We don’t actually know how you officially pronounce it but we always say something like “Suit”. We think the actual pronunciation might be “SEUWT” but we are not completely sure.

(((o))): What are some of the key influences of your sound, not necessarily favourite bands or albums but, ones that are the most similar in terms of the general direction you want to be in?

This is always such a hard question for us because we all listen to different genres of music which means SØWT is a big stirpot of different sounds and ideas of what our music should be. Bands like Sonic Youth, Nirvana and Smashing Pumpkins cross our minds immediately if we have to find a neutral zone to explain what our music sounds like.

(((o))): How do you guys approach lyric writing, is it the case that you each bring fully formed songs or lyrics to the band or is it maybe that you decide one person should sing on a song more or less, generally how do you balance the two vocalists? I think my favourite lyrics are actually in the song ‘Fuck you!’ “Please, I think that I’m so ugly and fat and I need someone to tell I’m not all the time” – I feel attacked but, it’s so relatable. I would have to actually get to read the lyrics or become more familiar to pick a more sincere favourite, but I do love that song…

For Danielle, lyrics either come at once to her in the rehearsals, hence the songs that only have one or two lines, those are formed by a strange hyperfocus on one thing that really needs to get out of her system in that specific moment. The lyrics she writes outside of the rehearsals are a big puzzle, made out of words and sentences she writes (and then forgets) in thousands of notebooks, random pieces of paper, walls and long-forgotten Microsoft word documents.

Legend says Jesse’s lyrics are mostly found at the bottom of an empty bottle of red wine.

(((o))): What’s the deal with that humanoid entity on your album artwork? Is that an anthropomorphised Magic Wand or is that just me?

We’re not sure, one day they started appearing on tables and walls, sometimes on doors, and they just kinda never left, they appeared friendly at first but now they won’t stop taunting us. They keep whispering things in our ears that later magically seem to be the inspirations for our lyrics.

We are still trying to find out who exactly they are and why they are here, but right now we do not have a single clue.

(((o))): You guys are working with Bob on some new stuff right now, what can you tell us about that? Feel free to give us much or as little away as you wish…

We are currently working on our first full-length album, we actually just finished recording about two weeks ago. We are not going to give away a lot of details yet, but there is a mini documentary coming out, hopefully soon, about the recording of one or two songs on the album.

The lockdown has been extremely harsh on everyone involved in the cultural world around us, and us as individuals. But for the band itself, it meant reinventing ourselves, experimenting with new members and sounds. In that way this lockdown has been less of a struggle for us than it probably was for a lot of other bands. We hope that everything eventually goes back to normal, so we can play live again, and meet lots of new people and reconnect with the ones we miss.

(((o))): What are you listening to at the moment? Do you guys have any obscure gems or friends’ bands you want to share with us?

At this exact moment, we are listening to ‘Shitlist’ by L7, oh the song just changed, it is now ‘100%’ by Sonic Youth.

But if you want some gems to listen to we recommend listening to You Wont Get What You Want by Daughters, or Jehnny Beth’s new album TO LOVE IS TO LIVE. Oh and the new split EP by Melvins (Chad note: no one here endorses Buzzo’s alt-right leanings) and Mudhoney!