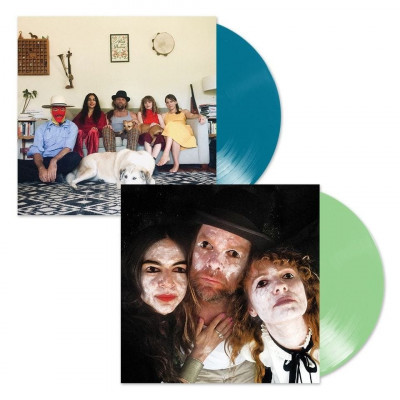 Time isn’t really working the way it’s supposed to right now. The combination of absolute soul-crushing non-movement of being stuck in doors for safety’s sake while worldwide news cycles accelerate out of control provides the bizarre realisation that it’s still bloody Wednesday while at the same time Summer’s been and gone. Hope everyone’s coping well, or at least better than I am. Originally released in 2019 (whenever that was) in a box as Joyful Noise’s Artist in Residence, percussionist to more people than is polite to mention and all-round good egg Thor Harris has produced two more albums with his friends to bring us records 3 and 4 in his ever-expanding series of meditative works, and it’s pitched perfectly for whatever now happens to be.

3 begins in beautiful fashion, with ‘As Above So Below’ including Wye Oaks’ Jenn Wasner and Tuvan throat singer (with the most wonderful Wiki page) Soriah layered with marimba and what I’m guessing to be a waterphone to ease us both into the record and out of the wider world. Proving that calm doesn’t always equate to passive, ‘Lonely Dee’’s drones and passages are harsh and penetrate the consciousness more aggressively that you’d expect although the result is still reminiscent of an organic process and in keeping with the slightly eerie space this record occupies. In so many ways, 3 brings to mind Tove Jansson’s Moomin tales and the late 1970s TV series with its soundtrack which set me off on so many childhood adventures.

4 is a whole different thing from the get-go, which should answer any “why wasn’t this a double album?” questions. Featuring Jolie Holland and Low vocalising at the very edge of your hearing, ‘Mystery Train’ is expansively cinematic and feels positively outward in perspective compared to 3’s concentration on more inward thoughts. On ‘I Told You They Were Lying’, a joyful, playful aspect comes to the source which makes the whole feel less experimental and more explorative and is far and away my favourite part across the two sets. And for once, the word “cinematic” isn’t just parked in a review of instrumental music because I ran out of adjectives, the references writ large in ‘Uber Driver’ will bring a moment of contemplative glee to any meditating film fans when the penny drops.

Of course it’s not just Thor here. His Friends here are plentiful and alongside the constant companionship of Peggy Ghorbani and Sarah Gautier, plus contribution from members of Swans, Hawk and a Hacksaw, Deerhoof, Godspeed You! Black Emperor in addition to those already mentioned. This is a work of collaboration and co-operation at its purest and finest, and perfect for a time when such gatherings of talent and ideas are currently the stuff of mere memory.

With the thoughtful 3 providing a breath in and the carefree 4 providing the exhalation, the yin and yang of Thor Harris & Friends’ latest pair of works provides a welcome cycle in unwelcome times. Whenever you need to slow the world down to catch your thoughts (or to write them down), then these are well worth bringing into yourself.