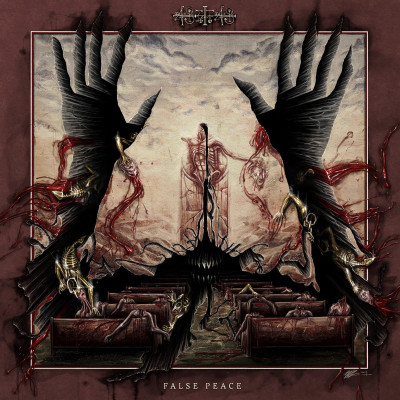 Those with an aversion to long albums may want to click away from this review now. The sophomore record from Portland, Oregon extreme metal maestros Aseitas is a behemoth – seventy-two minutes of death metal twisted into some of the most horrific, terror-inducing shapes you will hear this or any other year.

The perfect length for an album simply does not exist. I would, however, hold to the Platonic, universally cited, forty minutes as a strong marker for the majority of genres and for most artists to aspire toward. Shorter, and the genre you operate within must surely be known for its transient, staccato song lengths, or otherwise you’re damn sure every track you’re offering up is absolute gold. Longer than this and you had better be convinced you have good reason – not only for compositions to breathe, or concepts to flourish, but also a sincere belief that the listener will be prepared (and, more to the point, happy) to take the epic journey with you. Certainly, once you pass the hour mark, you have to be confident in both ability, relevance and dynamic. Or, you acknowledge it’s not an album at all, but a mixtape – lengthy but variable in quality by their very nature – but seldom seen reviewed among the pages of Echoes and Dust.

False Peace, only Aseitas’ second album (one has to remind oneself of that stunning fact repeatedly), so very nearly pull the feat of going beyond seventy minutes to perfection. A tiny bit of trimming – and by that I do only mean five or six minutes – and this would be one of the most accomplished death metal albums at this elongated length I have listened to in many a year, if ever. To be fair, it still is. The fact that I continue to replay it front to back after weeks of listening, is a testament to its power – it speaks volumes to the quality of craftmanship that has gone into the making of this brutal yet strangely beautiful LP. 2020 continues to rack up mind-altering death metal albums, from Ulcerate to Pyrrhon to Imperial Triumphant, and False Peace by Aseitas more than deserves to be discussed in the same breath as those scene-conquering talking points generously bequeathed to us in this cess-pit of a year.

The album opens with ‘False Peace’, a three minute intro blending noise and industrial, Godflesh tones together in unsettling yet deeply intriguing ways. Despite being lengthy, it is expertly measured, setting up the album incredibly well, pitching the listener into an already disturbed landscape, the vista of which will be our scene for the horrors that lie ahead. We then meet the irresistible blunt force trauma of ‘Scalded’. Immediately one hears a whole different swathe of influences and textures that some of the aforementioned dissonant death metal bands. Aseitas certainly know their way around these sounds, and they become more prevalent later on in the record, but on ‘Scalded’ we hear greater elements of technical, progressive metal, bringing to mind bands such as Car Bomb or even Ion Dissonance at their peak heaviness. The guitar tone throughout False Peace sits far more firmly in this wheel-house than elsewhere, and therefore makes the bands’ later experimentations sound all the fresher, as the timbre of their constructions sounds so different to many others.

‘Impermanence’ then thunders in, a dizzying track, with the same level of technicality as the track before. An insistent track, it blazes by in a flurry of syncopated, start/stop drills that easily reminds of Meshuggah at their most muscular and bestial. ‘Horse of Turin’ then flexes a different muscle, as the five-piece of Aseitas, switch up the heaviness. ‘Horse of Turin’ is still punishingly heavy but is wilder than that which has come before – a song brings in a greater amount of atmosphere and features a bridge that has more akin to post-metal crescendo than death metal ferocity. The band really do have an uncanny ability to meld genres in complex but cohesive ways, with this track proving a highlight on repeated listens. At its denouement beauty is wrought from the most unlikely of places. The closing of the track acts as a short segue into ‘Chrism’, a track of brain-melting labyrinthine grooves and tempos that compress and break asunder in the space of mere seconds. The drummer must be someone with John Nash levels of mathematics going on in his addled brain, because somehow the drums remain the root to the flights of fancy and utter mania that the other four members of Aseitas bring to the table.

And with those first five tracks, we have only traversed the first twenty minutes of False Peace. But what a twenty minutes. Serve me that as an EP and I’d be running through the streets in jubilation. An utter assault on the senses, Aseitas serve up an adrenaline shot through a trepanned skull, right into the brain. Yet the quintet, with a level of maturity that belies the short career to date of the band, know this is something that cannot be kept up. Death metal albums, especially experimental ones, can often fall short not because of a lack of technical proficiency or poor songwriting, but naïve album craftmanship. They don’t so much run out of steam themselves, but the demands on the listener are too great. When looking at the running time of False Peace one may question how on earth Aseitas don’t fall into that same camp. The simple answer to this – but not so simple to realise and enact – is to be aware of dynamics and flow. False Peace is an album that flows incredibly well, using the dynamics of their songwriting to ensure that the LP is consistently engaging and well-tempered.

Therefore, when we move past ‘Chrism’ into the fourteen minute opus that is ‘Spite/Sermon’, it serves as a signifier to the listener that we have entered a new passage of time and music within the album. The opening to the track itself cleverly disguises this, so as to provide a bridge between the packed-full, panic attack of the opening salvo, and this new stage. The start to ‘Spite/Sermon’ is equally sparks, lights and flames, before the tone of the guitars become a little cleaner and the rhythm sections behinds to breathe. Slowly the quintet sucks themselves and the listener into a disquieting lull and we perversely enjoy a passage of melancholy that serves as a desirable time for all to come up for air. In no way are the band any less intense, and this slower paced section is still punctuated with ever more ravaged vocals and chugging riffs. Here is where the influence of Ulcerate can perhaps be mostly heard – the New Zealanders unheimlich ability to meld grotesque, warped death metal with the most expansive attributes of post-metal. Aseitas are clearly no deferent students of this artistry, though, bringing in a gamut of ideas and flourishes throughout ‘Spite/Sermon’s runtime to engender pupils of their own infernal style. It’s yet another stunning, jaw-dropping track. False Peace is littered with them.

‘Spite/Sermon’ finishes with some delightful guitar work that serves as a branch to what first appears to be its own segue, in the form of ‘Crucible’. However, ‘Crucible’ is simply a fine piece of gorgeous musicianship that serves as a complete palette cleaner for what it to come. A sorbet between courses, so-to-speak. A sorbet made of The Body and Prurient. Why do we need it, though? Because, listener, we move into yet another chapter of this complicated, ever-transforming album. ‘Blood into Oil’ begins with the sort of beauty reserved for some of MONO’s most uplifting peaks beyond the zenith, before being broken asunder by Gojira-esque riffery – if the members decided to, y’know, actually fucking get heavy these days. There’s even some Opeth in there, with sumptuous guitars harmonising yet refusing to stay still, as the monolithic bass rumbles onward, performing its own crazed dance. The lack of uniformity in this beguiling, transfixing track reminds one of Chaos Echœs, too – with the fade out and back in and the squealing, sea-sick treble heavy guitars screaming over the top, before we are brought back to reality with a soft bump, as delicious piano close this most strange and mesmerising of tracks. It won’t be for everyone, but when creating an experimental death metal album of seventy-two minutes, I’m guessing the five members of Aseitas aren’t what you would call ‘crowd pleasers’, so I’m pretty sure either get on board, or don’t.

‘The Value of Degradation’ is a four minute track that combines some of the sounds we have heard before – a blend of industrial with noise. It’s the one track that on ‘False Peace’ that feels like it re-treads old ground and try as I might, I can’t see how it adds much at all, or could even be cut down to provide a clearer extrapolation of what the band was shooting for. With ‘Blood into Oil’s diminuendo, it also never feels like a piece of connective tissue was needed to connect it and ‘Behemoth’s Dance’. If I were to have the power to edit the album, I would quite simply remove it.

‘Behemoth’s Dance’ is a huge track – the longest on the record – at an impressive, foreboding sixteen minutes and change. As if Imperial Triumphant decided to collaborate with Gorguts at their most expansive and Rwake at their sludge-beleaguered best, this track is a sprawling doom-soaked death metal boa constrictor – circling, ever circling, endless, endless, ever tightening. Another monumental achievement within a monumental achievement of an album – False Peace is nestled Russian-doll extreme metal. I mean the track even finds time for a guitar solo that wouldn’t sound out of place on black metal psychedelic magicians Oranssi Pazuzu’s earlier work. It’s utter, deranged madness, and like scrawling on the asylum wall, perhaps there’s some sense hidden from the likes of us. The track could possibly achieve even greater resonance with some very subtle trimming, but overall it’s another wondrous epic in Aseitas’ growing canon.

The album closes with ‘Pieces’, three minutes of iridescent guitar work and another chance to show what an incredible drummer Zack Rodrigues is. Is it indulgent? Absolutely! But it also serves as a fine way to end a ridiculously ambitious album and following the triumph of ‘Behemoth’s Dance’ the quintet has more than earned a last hurrah.

False Peace is another stunning experimental death metal album delivered to us in 2020. We should, in no way, shape or form, take this for granted. Yet another incredible year for the sub-genre. One should not lose sight of how incredible that is, or how incredible Aseitas are themselves. The pure, unbridled ambition is to be commended on its own. To pull off such a feat on their sophomore record is quite simply amazing. Take a bow, gentlemen. False Peace is a complex, at times baffling Rubik Cube – the auditory equivalent of the gory 1997 motion picture that created a prison for body and soul based on those ever changing (and seemingly multiplying) boxes of torture. It’s long, it’s demanding and, yes, it’s absolutely brilliant. What on earth will they do next? I need a lie down…