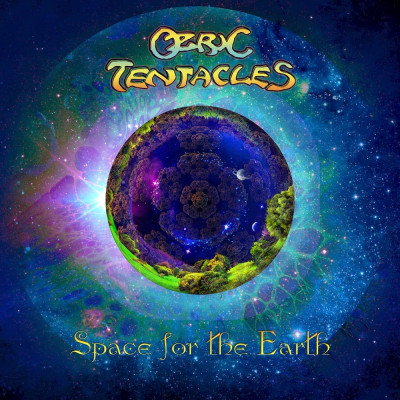 I don’t ever really plan these tunes ahead. If I try they always end up different anyway. I just ‘hear’ what the track suggests in my head and do my best to get it down, or at least a quick reference version before it flies out the window in a puff of smoke…

For me, Ozric Tentacles have always been part of my roster of music I listen to almost solely whilst tripping on various psychedelics, along with the likes of Ott, The KLF, The Orb and Shpongle. They make fucking kick ass music that is sporadic and mind-bending and suffice to say extremely influential to the Echoes and Dust family. When we were offered the interview, I asked Dan Salter, one of the founders of the website if he had any questions for the band and he simply said, “ask them if they know that this (*gestures at himself* is all their fault”. I think that’s all that needs to be said about the cerebrally affecting nature of the group’s music.

(((o))): Lately, I’ve been asking bands how has lockdown effected their output, but I know that your album was delayed and gigs such as Ed Wynne live at The Lexington, which as an employee of the venue, I was really looking forward to, have been postponed. Internally, though, did the lockdown effect the decision to delay the album and has it influenced your output in other ways such as not being able to rehearse, et cetera?

Ed Wynne: The lockdown has had more of a delaying effect on the gigs in fact, than the album. We originally had a tour booked for around now, but that had to be moved to spring 2021…we’ll have to see what happens there. Making the album during lockdown actually gave me an opportunity to take more time than usual, and explore a little deeper which was an amazing journey. I did miss having everyone in the studio a bit, but managed to send files back and forth successfully. Most of those involved have some sort of recording setup thankfully these days.

(((o))): I’ve always associated your music with tripping is that something that is part of your creative process or end goal or is it simply what happens when you get in a studio? Also, what is the writing process generally like from the rawest idea to what we get as part of an album?

Ed Wynne: Ha! Yes, it’s always one of the considerations I think about when making these tunes. Some people will definitely be getting pretty spaced way out there when they hear them, therefore, I try and make it a nice ride…sometimes to some very unusual places, but hopefully, with a happy and comfortable conclusion and a nice shimmery afterglow.

As for the writing process… how they start, that’s a different story every time. Often, it’ll be when I come into the studio and switch a synth on and get it coming through the speakers and suddenly there’s the doorway/intro into the next soundscape journey! Sometimes I’ll work out deliberate guitar stuff meticulously for hours tho’. There are so many more variables on the guitar. Every take is a different story!

(((o))): On a similar thread, how would you describe the differences between your albums because whilst none of them are in any way the same thing, there’s this intangible “Ozrics” sound on all of them, so I was wondering if there’s perhaps a kind of trajectory or thematic direction you head or if it’s pretty spontaneous or studio-based?

Ed Wynne: I don’t ever really plan these tunes ahead. If I try they always end up different anyway. I just ‘hear’ what the track suggests in my head and do my best to get it down, or at least a quick reference version before it flies out the window in a puff of smoke…

(((o))): Does equipment play a large role in your process and how has your set-up evolved, in terms of gear, over time?

Ed Wynne: The equipment does play a huge role, synth wise anyhow. My first synth was the amazing Sequential Circuits Pro 1. It just so happened that a friend of mine was selling one that he thought was broken, for sixty quid! Turns out it wasn’t broken, the filter cutoff frequency knob was just turned down all the way rendering it silent! So, that had a massive part to play in the Ozric synth realm. All those swoops, waterfalls, bubbles, and soaring loopy synth solos…… Technology is basically amazing if you happen to be into making electronic music!!!

(((o))): What is the concept behind the title of your new album Space For The Earth?

Ed Wynne: The title kind of speaks for itself in a way. Whilst making it during lockdown it occurred to me that there was a kind of aura of silence when I stepped outside, the birdsong to machine noise ratio had shifted in favour of the natural side of things. It seemed to me, that for a brief time, there was definitely a bit of ‘Space for the Earth’…

(((o))): How did making the album come together? Has it been years in development and wrangling musicians together or was it more instantaneous?

Ed Wynne: This album was all written within the last year. All very recent, as I tend to spend pretty much most of my waking life in the studio, so when all’s well I have a fairly regular output of tunes… It feels to me like a harmonic psychedelic tapestry being constantly woven and rolled out as if casting a sonic pathway into varying inter-dimensional places…and when there’s enough I bundle them up and call them something and ‘frisbee’ them out into the realm beyond the studio.

(((o))): What are you listening to these days? Do you have any obscure gems and/or friend’s projects you can recommend to myself and the readership?

Ed Wynne: I don’t really get much time to listen to a lot of stuff when I’m deep in there, as when I’m not in the studio its often that my ears are still too full of sounds and need a break. Recently, though, I’ve been collaborating on an offshoot project called Vita Voom with my friend Gre Vanderloo from the band Gracerooms- who make very nice electro slightly Ozricky space groove off we go kind of stuff with their own unique flavour…

Thank you Ed Wynne for satisfying my curiosity, it was an immense honour, Space For The Earth is out NOW on Kscope Records.