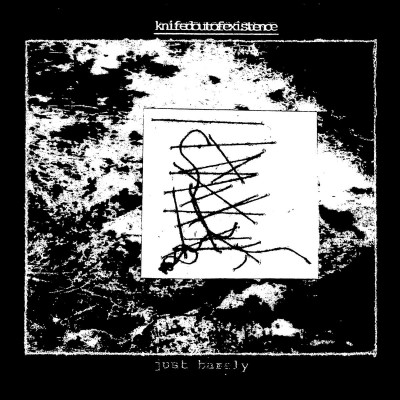 For some people playing live is a luxury – just an added benefit of this music indulgence. For others it’s a chore, or, worse still, a source of sheer, debilitating, panic. There is another group, however, who thrive on the experience. They need it to survive. The act in itself is cleansing, like performing an exorcism on oneself: a cathartic purging of thoughts and feelings in order to reach inner peace. Dean Lloyd Robinson (the force behind both Knifedoutofexistence and the exquisitely curated Outsider Art record label) is undoubtedly a pin-wearing loyalist of this latter faction.

The title of his new EP – Just Barely – seems like it’s hinting towards survival, suggesting a sense of hanging in there, of just getting by. Combine this with track titles such as ‘By A Thread’, ‘Consumed’ and ‘Daily Thoughts’ and it’s hard not to perceive these as signs of coping strategies worn thin. Of someone utterly exhausted from continually battling their personal demons. If you happen to follow Dean’s live schedule then you’ll know that, when it comes to performances, he is absolutely tireless. Barely 3 months can pass without him nipping off on tour or putting on a night of exhilarating harsh noise. For that to be taken away by this all-engulfing pandemic must have come as quite a blow. In fact, he’s one of a very slim number of musicians who have successfully managed to arrange and play at a socially-distanced show post-lockdown which, I think, goes some way to show the urgency to perform that pulses within him.

If performance helps to sustain Dean then what purpose does the act of recording serve? In the case of Just Barely, it seems to fulfil a mirrored facet of the same, a manifestation of this lustral desire. His work is threaded through with positivity clawed out of hideous violence. A gnashing and gnawing of sound that releases negative emotions in a healthy manner. The success of this process can be heard in the final track on this EP. ‘16-5-10’ is underpinned by a meandering cloud of gaseous synths that enticingly brush up against melody without ever fully embracing it. That the melody even dares to exist amongst these subsumed waves of troubling cacophonous rage is, in itself, a slither of hope. Rancorous explosive distortions swell against an epic thrum as if receiving vicious signals beamed from a distant planet. It’s the haunting black box recordings of an expedition gone horribly wrong. And yet that choked melody guides us out of the darkness like a single beacon shining the way.

Rife with horror incantations, second track ‘Consumed’ launches a thumbed, morbid beat that has been left to wander, drift, disappear and return. It is digital melancholy corrupted by howling disturbances or the sound of a slowly flooding submarine. Then there are the dismal burnings of opener, ‘By A Thread’. Like a flame battered by the wind, its deep, surging frequencies meld with juddering & chopped bursts of static that feel a lot like relief. Full, oppressive sounds mob the spectrum as Dean’s anguished vocals are barked out from beneath the sonic swamp. It’s a bludgeoning quagmire. His voice always buried under the gargantuan rumbles and blessed feedback as if they are caged and fighting to squirm out from their shackles. A molten flow of sound picking up velocity as it scorches downhill. Shrieking magma churns slowly and rhythmically as psychic tapestries uncoil.

At the heart of Just Barely, jagged rhythms twitch like staccato heartbeats wrought through a stumbling tunnel of delay. Sounds shift from bouncing breeze into whipped wind before becoming the demonic whispers of unsettled souls caught in limbo and damned to cry out over eternally convulsing wings. It’s a hesitant surge. It’s creeping concern. It’s the sound of doom-scrolling through poison-licked sanity.

It feels like, in 2020, full-bodied, earth-shuddering noise is just about the only sane response to the constant mental, physical, societal, and ecological unravelling that appears to be occurring around us. So, if part of art’s purpose is to help people feel a little less alone – be it for the length of an EP, or for a 20 minute set of ear-blistering feedback, or if it’s even just for the most split of seconds – if it’s enough to reassure, comfort, or enrich someone then, goddamn, it’s got to be worthwhile, right? Wrangling positivity out of negative sounds. After all, that seems to be the crux of this endeavour and I for one cannot wait to be in the audience when Dean sets about his noisy catharsis.