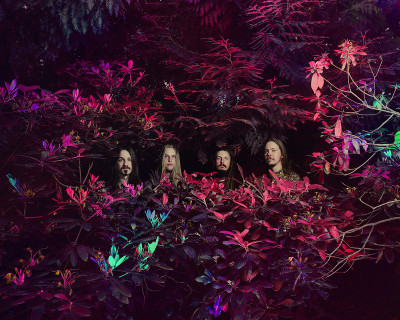 The name started as a joke, making fun of difficult post-rock band names. The goal was to come up with the most difficult name for an imaginary band.

Three years after Ruination, psychedelic-rock quartet from Finland, Kairon; IRSE!, are back with a fantastic new album. Released via the band’s long-time label Svart Records, Polysomn is Kairon; IRSE!’s third-full length album. The band has remained at the forefront of the European psychedelic music scene, and has, as a result, attracted a dedicated following over the years. Anoop Bhat had the rare chance to speak to Niko Lehdontie and talk at length about the band’s origins, the evolution of their sound, their individual influences and of course, the new album among other things.

E&D: Hello Niko! Hope you and the band are doing well. Congratulations on the fantastic new album. How has the reception been so far?

Niko: Hi! I’m doing fine thanks. The reception has been good and it’s nice that our listeners have found our new album from the vast quantity of new releases.

E&D: The COVID-19 pandemic has brought the entire music industry to a standstill. I imagine it isn’t any different for you. What were your original plans for the album launch? What did you do instead?

Niko: We were supposed to be touring this Autumn in Europe, but obviously we had to cancel it. We are still planning to play three shows here in Finland before the end of the year. Otherwise all of our touring plans have been postponed. This has given us a good gap to start preparing new material, which is exactly what we have done.

E&D: I read in an interview that you and Lasse are childhood friends. Did you always want to write music together and play in a band or was that the result of meeting Dmitry and Johannes in university?

Niko: I have known Lasse since pre-elementary school, but it was in high school when we started sharing interests in music, games and culture in general. Lasse had moved to Kaustinen a year before I did, and he had met Dmitry and Johannes in the same student housing. A big factor for us starting a band, in addition to getting along well and being into same kind of music, was the school’s facilities. They had great rehearsal spaces and studios, which we could use 24/7. Kaustinen is a small town of approx. 4000 people, so it’s quite natural that we spent most of our free time there jamming and exploring the depths of loud expressive music.

E&D: How long did it take for the band to figure out the kind of music it wanted to play? When did you know you had a sound that was Kairon; IRSE!’s?

Niko: Through natural evolving, I guess. We started by working on some demos Lasse had made, jammed together a lot and started playing shows around Finland. This period involved a lot of experimenting with our ensemble dynamics and improvisation both in rehearsals and live shows. This led us to find our own sound and the joys of getting engulfed in a wall of sound. Our music is an extension of our personalities, further evolving with our musical influences.

E&D: What do the words Kairon and Irse mean? What made you put the two words together?

Niko: Irse was the first word that Lasse saw when he opened a Spanish dictionary. The name started as a joke, making fun of difficult post-rock band names. The goal was to come up with the most difficult name for an imaginary band. So, the name was invented way before we even had plans to start an actual band.

E&D: The band’s first album Ujubasajuba was an exercise in dense, shoegaze-y, krautrock-y psych-rock music whereas Ruination had an unmistakable Canterbury prog-rock and jazz-rock influence. Would you say that’s a fair assessment? What changed in between those two albums?

Niko: Yeah, you’re right. There was a long break between those two albums, during which we didn’t play together for a year. No one had wanted to release Ujubasajuba, which was an album in which we spent a lot of time and resources, and we decided to have a little break. Meanwhile I was writing new demos that sounded more complex and jazzier than before, and when we started rehearsing again that was the direction we took. We actually cut all of our songs that were more in the style of Ujubasajuba, because we wanted to try to create an album that would introduce this different style of aesthetics.

E&D: The music on Polysomn feels a lot more in line with the first album than the second; was this a conscious decision? Does the band plan on returning to and/or exploring the Ruination sound?

Niko: Never say never, but I don’t think we’ll go back to that. I personally feel more inclined towards the style that Ujubasajuba and Polysomn represent. We have been experimenting with catchier song structures and this feels more interesting to us at the moment. For the upcoming album we are actually testing out a few songs that we wrote after Ujubasajuba.

E&D: Thematically, much of the album feels like a retelling of a glorious, other-worldly voyage – a metaphysical journey into alternate universes – constantly discovering new worlds, each one more breathtaking than the last. What were some of the central ideas behind Polysomn?

Niko: There is a very loose concept of dreaming and travelling between mindscapes, but the main idea of the album is to induce bliss in the listener. From a song writing point of view, the goal was to make simpler yet effective songs with complex sound design. We started to implement electronic elements into our live performance since I’ve been obsessed this ‘’electronic band’’ idea for a while now. It’s not a unique idea in any way – quite the opposite – but it’s a new element in our music. In my dreams our band would sound like it were an organic sampler, if that makes any sense.

E&D: Polysomn has a very obvious metaphysical, sci-fi bent – be it the other-worldly cover art, the Rainer Paananen press photographs, the song titles or the flange-heavy, astral sounds throughout – it’s all over it. Where does the band get these interests from? Could you share any literature, movies or any other other art that might have influenced this side of Kairon; IRSE!’s personality?

Niko: As I mentioned earlier, it is just a natural extension of who we are and the stuff we are into. We like emphasizing otherworldly things in music, so naturally our visual presentation has to support that. Rainer Paananen is a very good friend of ours and the best band photographer in Finland, and we are constantly inspired by his work.

E&D: Correct me if I’m wrong but Polysomn is probably the first time the band has produced a complete album on its own, with you handling most of the mixing and producing. How happy are you with the result? What would you like to work on or change?

Niko: Yeah I’m happy with the result. I’ve come terms with the mix and I think it supports the album by giving it unique atmosphere. But would I change something? Let’s just say I’m glad that I eventually ran into a deadline, otherwise I would still be sitting behind the mixing console.

E&D: Kairon; IRSE!, over the years, has had some fantastic artwork associated with it, right from Gunilla Bergström ‘demon drinking blood’ illustration (that donned Ujubasajuba’s Bandcamp-only release) to Olli Kiviluoto’s striking paintings and Jenna Haapaharju’s digital, photo-manipulation work. The band has always brought forward a new aesthetic with each album, probably reflective of the band’s ever-evolving sound. Did you plan on this?

Niko: It hasn’t been a result of any long-term planning. We have chosen the kind of artwork that best reflects the music and fits the band’s style for each album.

E&D: What made you pick the Gunilla Bergström illustration? What makes it interesting, to me, is that even when the album was picked up for a physical release by Svart Records and you changed the artwork (I’m guessing for copyright/legal reasons) you let the chalice of blood from the original cover remain. What was its significance?

Niko: As no one wanted to release our record, Lasse just uploaded the album on Bandcamp with the illustration. We didn’t think too much about it, it fit the album’s mood and we loved the weird, disoriented feeling it had. The monster is pretty scary and out of place, if you think about the context it is in. When a physical release was in the making, we contacted Gunilla Bergström for her permission to use the image, but she kindly declined, so we commissioned a new cover art for the album. The chalice is a nod to its predecessor.

E&D: Kairon; IRSE!’s lyrics have always been a matter of great curiosity to me and I’m sure a lot of other listeners, more so as they’re sung in Finnish. Do you ever plan on making them public?

Niko: Actually, all of our lyrics are in English with the exception of a couple being in Russian. On Polysomn we printed the lyrics on the cd booklet and the vinyl sleeve, so it’s just a matter of someone copying them on the internet. Maybe if we find those older lyrics somewhere, we can put them out as well.

Niko: It’s mixture of 60s and 90s alternative music. Fuzzy guitars and ethereal melodies. Probably the best to leave the interpretation to the listener.

E&D: What are some of the bands that Kairon; IRSE! love and/or take inspiration from? What does each member bring to the band’s unique sound?

Niko: Oh…that’s a hard question since there are so many. Can, My Bloody Valentine, Radiohead, early- Mew, would probably be the biggest ones if we think what we were into when we started but it’s not that simple. We are into a grandiose melodies and arrangements, but we also like super hip-hoppy beats and electronic grooves. It’s all about using our aesthetics to build something fresh, so the bands we are into changes on a daily basis. Everyone brings something. We have rehearsed and played together for so long, that our musical representation would drastically change if any one of us was missing. Dmitry and Johannes have a very unique rhythmic balance and such nice dynamic variation, which can be tormenting loud at times. Lasse and I are just dozing off with space noises and atmospheres on top of that.

E&D: Kairon; IRSE! shares members with bands like Oranssi Pazuzu, Domovoyd and Waste Space Orchestra – all of them stalwarts of psychedelic music in this day and age and yet each band is so distinctive and different from one another. How do you maintain that?

Niko: The bands you’ve mentioned are at least partly influenced by metal and are using darker themes in their expression. Kairon is not influenced by metal music at all. We are making psychedelic music, but it’s also more than just psychedelic rock and thus we don’t feel that we belong to any particular scene. We have always viewed our music more or less pop/rock oriented.

E&D: What’s next for Kairon; IRSE!? How does the band plan on spending the rest of the year?

Niko: Crafting the new album and making some new video art for our future live shows, whenever they happen.

E&D: Thank you so much for your time, Niko. Any final words?