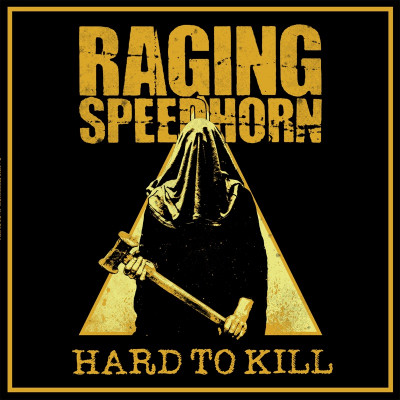 Hard to Kill by Raging Speedhorn

It has been four years since Raging Speedhorn’s 2016 storming comeback album The Last Ritual. That also coincided with this reviewer witness a blistering performance at Desertfest that nearly had a packed Underworld’s chunky pillars crumble under the weight of the tremendous might of the Raging Speedhorn power-packed ferocity, and the consequent welcoming crowd reaction.

It’s good then to see Corby’s mightiest follow up that fine return with a sixth album Hard to Kill, although it does come with a few line up adjustments. This is the first we hear of new vocalist Dan Cook, replacing John Loughlin, and new guitarist Dave Leese as well as former Hundred Reasons bassist Andy Gilmour having also joined forces with founding members; drummer Gordon Morison, guitarist Jim Palmer and vocalist Frank Regan.

The album title and front cover pretty much nails what lies within. I assume the title Hard to Kill relates to the fact the band are still going after all these years after overcoming all obstacles thrown in their path along the way. While the John Carpenter styled horror movie poster cover reveals the music is indeed a no-nonsense brutal attack in-waiting for the listener.

Hard to Kill is indeed the sound of a re-shuffled band making a point, and in a no-nonsense straight to the point manner. Opener ‘Snakebite’ pummels in a ton of aggression, fast and furious and the sound of a band revved up and ready to roar. Although surprisingly it turns out to be one of the least memorable. The title track ‘Hard to Kill’ is a belter though, an up-tempo basher with aggressive vocal deliveries and drummer Gordon leading the downturn tempo ending in fine fashion.

Although the songs which hit home the hardest and most effectively are when they slow everything down, and roll hard like a jettison of synchronized sledge hammers. ‘Doom Machine’, ‘Spitfire’ and ‘Hammer Down’ all benefit as the slower rhythms pound and the riffs burst forth and let rip in full force. These also leaves vocalists Frank and Dan – whom sound like they’re having great fun trading off each other – to have greater room to roar and rage, and inflict huge choruses to really slam the message home that the fires are alight in their bellies. While in the case of ‘Hand of God’, it contains the album’s meanest, crunchiest, sludgiest riff and claims the album’s highlight bragging rights. It’s a beast of song.

The eight tracks are relentlessly heavy and leaves you breathless, so while the thinking might be that the album requires something of a lighter touch for the closing 9th track, their choice and inclusion of a cover of T-Rex’s ‘Children of the Revolution’ is a baffling one. It’s well executed and a little bit harder in its glam hitting stomp, but doesn’t stray too far from the original. It left me slightly disappointed they didn’t give it a new heavier R.S styled makeover. Although I can see it working a treat live.

Despite last song grumbles, however, Hard to Kill delivers huge enjoyable slabs of undiluted ferocious metal that should get heads nodding, and in an ideal near future (I’ve started praying to the Metal Gods), pick up where they left off and produce more frenzied mosh pit high times.