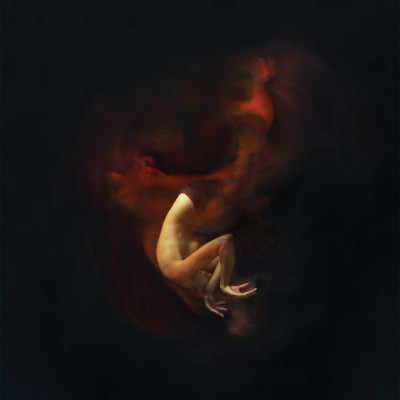 Imagine a hall of staggering dimensions. A cathedral so vast the ceiling seems to be the sky itself. Indeed, lit only by natural light, the surrounds are imbued with a lugubrious dusk, with only tiny pinpricks of light haloing from candles placed erratically across the cold stone floor and hanging from improbably ancient wooden chandeliers. Here a vast gathering is playing out – a sombre melancholy casts a dark veil across the immeasurable, shrouded, out of focus audience.

This is a funeral. Not for an individual, but for the world; both real and imagined.

Rïcïnn is the solo project of Laure Le Prunenec. Nereïd is her sophomore album, following the release of Lïan four years ago. Laure’s debut record was received extremely well in 2016, hailed as a high watermark of avant-garde neo-classical composition, vocal dexterity and musicianship. Raise the flood barriers then, as Nereïd packs an even greater emotional punch and finds itself traversing waters previously unexplored by Laure or many others across the vast musical landscape of the 21st Century.

For those unaware of Rïcïnn or Laure’s previous work, she is the female vocal gymnast at the forefront of breakcore collective Igorrr, performs vocals across the output of experimental gothic doom metal band Öxxö Xööx, as well as belting out notes for the strange and wonderful triphop unit Corpo-Mente. Rïcïnn, unlike the other artists mentioned, is completely Laure’s own, with all the composition and instrumentation flowing from her hand. While the projects deliver a similar tonality to one another, as well as Laure’s imperious pipes, Rïcïnn is a very different outfit, sharing commonalities with Björk and Diamanda Galás as well as the virtuosic song-structuring of Kristen Hayter of Lingua Ignota and even Margaret Chardiet of Pharmakon.

Nereïd is, in essence, an eschatological poem; giving both the divine and the shadows voice. Our funeral is one permeated with an overwhelming, languageless sorrow. Our poem is not written down, the text slipping from the paper of the page, and so becomes an oral history, a retelling bubbling between the lines of fact and fiction; a lament for things that have passed, that are suffering now and that will never come to be.

‘Zéro’ opens and was aptly recorded in a church situated in Normandy. It introduces Nereïd powerfully, with Laure’s voice pitch perfect and true, and initially part of a choir. There are a host of voices scattered throughout the album, but usually her voice stands alone, exhibiting a rare yet unsettling purity, or, her vocals are layered for devastating effect. Here, however, we get a complimentary choir of voices that announce the beginning of a breath-taking journey.

This is followed by ‘Doris’, a rather unassumingly titled track compared to much of the rest of Nereïd, but undoubtedly one of its highlights. Laure Le Prunenec comes about as close to embodying Björk Guðmundsdóttir here. It is a track both sumptuous and impossibly fragile, featuring nadirs and zeniths of vocal timbre, from its stumbling, stuttering backdrop, to its eye-watering high notes and even featuring a ferocious growl from Travis Ryan of Cattle Decapitation. Nature’s sounds subtly weave throughout this track and make reappearances both real and invisibly echoed in the listener’s own mind during the remaining album.

The title track is excellent, too, following as it does in the shocking wake of ‘Doris’, but it is no less impactful or moving. The song features rich deep male vocals as its base, pitch bended and manipulated in ways both intriguing and uncomfortable. Strings then join building the song layer by layer as we bear witness, until guitars and drums join, creating an epic vista.

Despite the relative simplicity it is a deeply moving conjoining of audio palettes, as Rïcïnn’s work is so typically sparse when it comes to instrumentation, with vocals consistently the focus, very often a cappella. This axiom swiftly reasserts itself, despite the impassioned string accompaniment, as the patterns of vocals and layers of vocal work overwhelm. If one was to think of Nereïd as a funeral opera – and one should – then ‘Missäe’ is an unorthodox cabaletta, actually slower in pace than ‘Nereïd’s impatient aria. It ends with a sombre doom-laden organ, reminiscent of Anna von Hausswolff’s Dark Magic at its most paradoxically triumphant.

‘Artäe’ begins with some gorgeous strings once again, ‘cello and violins intermingling, before classical guitar insinuates itself within the song and Laure’s voice softly calls out, like La Llorona, beckoning us towards to shore. Plucked, staccato strings raise the tension before the clutter of varied vocal work (strained singing, clear vocals, whispered and spoken word) all combines and weave a tapestry that pulls the listener back from the bank, only to remind one that life is governed by mortality and the ultimate rule of death. It’s stark, and one of the most funerary moments throughout the LP.

‘Ëön’ acts as another transitive moment on the record, featuring hushed male vocals, an exhaling technique that brings to mind Alcest’s Neige at his most Romantic, as Laure floats over the top, bringing a further sense of melancholy and beauty to proceedings. ‘Psamatäe’ initially wipes the audio foundation of strings or sole vocal composition, and we are treated to a thoroughly more modern sound of synths and keyboards, in a similar way to Hamilton Ulmer of Makeunder used on his most recent album Pale Cicada, albeit with a different emotional direction and chasms wide musical ancestry. ‘Psamatäe’ feels holy, reverent in its subject matter, even more so than with previous songs. As it begins to close a steady drumbeat brings a sense of purpose and movement to the track as synths return to morph the track into a strange and opprobrious mood changer.

‘J-C’ is divine.  It is simply a luscious, lavish, beautiful piece of music. In an alternative reality this is a love song in a 90s animated Disney film directed by Tim Burton and financed by a ghost. ‘Thaliäe’ features the gorgeous dulcet tones of a viola da gamba, played by Roland Kern, and some extraordinary bass, both of which are accompanied by some complex synth and percussive elements. It’s another masterwork of songwriting and musical composition. One can never forget to pay Laure incredible respect for the extremely high level of musicianship and technical knowledge that allow the tracks on Nereïd to sound as complex and as gorgeous as they do.

‘Ele’ is cinematic in its sweep and would not feel out of place on a Clint Mansell film soundtrack. I’m not aware whether Laure has this string to her bow, but if filmmakers do manage to stumble across this album and Lïan, I imagine her services would very quickly be in short supply. We are then treated to ‘Söre’, the most moving and beautiful track on the entire album. It feels like something delivered from the heavens – be that divinity or extra-terrestrial could be a matter of debate. The drumming on the album is very much noteworthy, but on ‘Söre’ Sylvain Bouvier’s style and technique are beyond reproach. Just stunning.  I could listen to this track on endless repeat for the remainder of this year and not tire of it, such is the delight it gives and its unassuming depth.

Nereïd closes with ‘Erani’, a delicate track, imploring us to ‘breathe’ and telling the funeral’s audience that there is love still in this world. The world may be dark and twisted, and it is by no means perfect whatsoever, but one can still touch another person’s life, yes, sometimes for the worse, but also – one must cling onto forever – for the better. There is shelter from the storm. And that shelter is simply us. Shelter within and with others.

Laure Le Prunenec’s new piece of work, four years in the making, is a joy to listen to. Its vocal and instrumental textures are a piece of art that one can admire from afar and in basic tones. But peer closer, and Rïcïnn has textures built over and on top of one another. A canvas of paintings finished then whitewashed and obscured only for the same scene to be repeated in subtly different ways. With the right ear, Laure invites the listener into her own world, and taking your hand, can show you all the magic, the detail and the horror that lies inside.