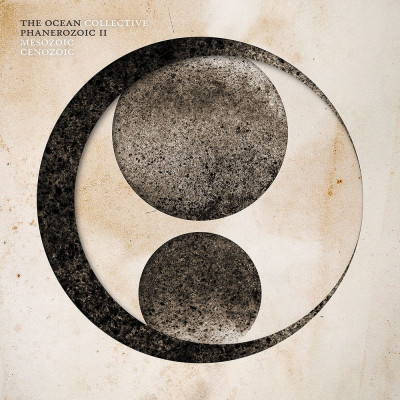 The second half of Phanerozoic has landed, and with it the final parts of the era of the same name: Mesozoic | Cenozoic. The Mesozoic era is a period spanning 185 million years, and includes three well known periods: the Triassic, Jurassic and Cretaceous. Cenozoic, meanwhile, extends from the end of the Mesozoic to today’s date. Understandably, it may be hard to condense such a breadth of time into a mere 51 minutes, but The Ocean are no stranger to ensuring that each melody, vocal pattern and drum interlude is eloquently placed and packs a meaningful punch.

The Mesozoic era is represented in the album’s first two songs, sharing the same name as the famous sub-periods. Cenozoic backs up the rest of the album. It also features the familiar voice of Katatonia’s Jonas Renkse and the return of Tomas Hallbom of Breach.

From the off, whilst never retreating from its heavy core, Phanerozoic II is clearly more experimental in its style. You could be forgiven for thinking that this approach means that the album feels less connected. Conversely, this experimental approach has meant that each song has a clearly distinctive tone and feel. ‘Jurassic | Cretaceous’ is a perfect example of an amalgam of ideas coming together to form a sweeping 13 minute epic, together with triumphant bridge sections and memorable choruses; the drop at 9 minutes 30 seconds, following Renkse’s interlude, is worth every second of build-up.

This record (again, no change for The Ocean) is a journey. Whilst there are incredible moments forming entire swathes and scattered segments of this album, listening to it as a collective (no pun intended) is how to truly experience it. Halfway through the album, ‘Oligocene’ and ‘Miocene | Pliocene’ offer a moment of reprieve from the sheer carnage that preceded it. The two songs make 8 and a half minutes of slow build up towards a cascading chorus in ‘Miocene | Pliocene’.

That is not to say that the heavier elements of the album have left, as they soon return to the sound of “eyes wide open” halfway through ‘Pleistocene’; naturally, it ends in a cacophony of blast beats, guttural screams. ‘Holocene’ closes the album by taking a step further into experimental. It also contains a lyrical throwback to the first song, wrapping up the whole journey neatly.

Phanerozoic I was our album of the year when it came out and its successor could similarly take the crown. Despite how horrible this year has been for so many, Phanerozoic II offers a reminder that powers beyond our control guide our destiny, and we are merely casual observers of the destructive, unforgiving and indiscriminate power of nature and time.