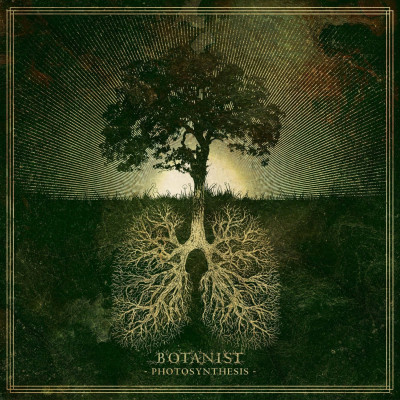 The outer reaches of a genre are always, in my experience, the most exciting to explore. For every failed experiment, every inexplicable project, there are artists doing something strange and yet inherently wonderful. Hailing from San Francisco, California, Botanist are one such act in an adjacent verdant realm to black metal.

The band have been active for well over a decade now, first as a solo-project of multi-instrumentalist Otrebor and later as a fully bloomed band, with this album seeing a new members in the form of Tony Thomas on bass, who plays with drummer Daturas in Bay Area death metal bands Dawns of Ouroboros and Sentient Ignition. Botanist have never felt so complete as they do on the new album – and fourth collectively composed record – Photosynthesis.

If you haven’t picked up on it yet – there’s a theme going on here. Botanist is a conceptual post-black metal band; Photosynthesis being a concept album about how plants convert sunlight into energy, how they transform carbon dioxide into the oxygen that all fauna requires to breathe. Each of the album’s eight tracks deal with an aspect of photosynthesis – the core visual theme of the album – depicting the world’s forests as the functioning lung system of the world, each tree an individual cell in the global process, scattered across the Earth. Furthermore, we have the character of ‘The Botanist’, a scientist in love with the natural world, who despairs about the present day, and who dreams, nay longs for, the crumbling of humanity so that the wild can reclaim and reconstruct its magisterial kingdom.

Before entering into a review of the songs themselves, it is worth reflecting on the recording quality of the album. The sound of this thing is captivating, with a clarity and a depth and warmth of instrumentation not previously found on a Botanist LP. Production was handled by Dan Swanö, a musician of great import in the Swedish melodic and progressive death metal scenes, especially during the years either side of the millennium, and now very much known for his excellent output from his own Unisound studio. Well, we can easily add Photosynthesis to that growing list. The injection of Swanö’s inherent style and artistic creativity in the more avant-garde areas of the metal spectrum is a perfect match for the diverse, off-kilter sound and vision of Botanist.

Botanist are atypical not only for their concept, but for the eschewing of traditional guitar as the basis of their black metal, as well as the growing predominance of glowing clean vocals beyond the more instantly recognisable genre shriek. Otrebor performs on an electrified hammered dulcimer rather than guitar, able to produce a similar tremolo effect, but unmistakably different in timbre and the strange, obtuse riffs he is able to conjure from the instrument. It produces a truly different listening experience and one that any adventurous fan of black metal eager for different flavour will surely delight in.

Photosynthesis opens with the macro of nature’s alchemical process of turning the Sun’s rays into enduring life, providing extreme metal’s answer to the proggy experimental ambience of Mort Garson’s Mother Earth’s Plantasia. ‘Light’ beams its way into black metal’s typical night, a heavenly, almost spiritual track of the dulcimer drenching everything it touches as Otrebor’s clean (almost choral) vocal work swells and the dream of this album ensnares…

‘Water’ stays with the macro elements of the concept but if the first true ‘song’ on the album. It features some utterly stunning dulcimer work once again already, with one riff in particular reminiscent of Eastern mysticism, hammering home the idea of a global outlook from the band. The drumming is also extremely impressive on this and throughout the album, consistently giving Botanist a solid structure – its roots as it were – allowing the other members to create ever more fanciful and elaborate works upon its intricate yet thundering foundation. With ‘Chlorophyll’ Botanist oddly create both one of the heaviest and most beautiful tracks on the record. The simple chord progressions and delightful added synths create a delightful backdrop to the impassioned screaming, reminiscent of Flenser stablemates Bosse-de-Nage in complex choice of rhythm and lyric, if slightly higher pitched in tone.

‘Dehydration’ brings the pace back down, with contemplative string work, before launching one again into a heavier passage, with some vocals here trespassing into a more death metal style. These are coupled with menacing gets gorgeously delivered melodic tones. It’s a furious track of malcontent, clearly raging against the times when light and water are in short supply and there is a threat to the plant, the tree, the forest’s very survival. ‘Bacteria’ opens with a mysterious, uneasy build, featuring some inventive, delicious bass as the dulcimer extravagance takes over once again for a bridge of decadent wrath before the song transitions into one of the most tortured, drawn out passages, changing the dynamic of the LP into something once again plaintive and warning…

Photosynthesis is a strong album, but it is in its second half where the band prove themselves and the LP strongest. ‘Stroma’ is a spacious track, allowing the band and the album to breathe, and for yet another time the bass is the star, with a delightful tone, that instantly brings to mind 60s and 70s prog of the highest order. With the semi-religious sounding vocals peeling over this and the complex drumming, one feels as if one has trespassed upon a cult. In many ways we have – ‘The Botanist’ delivering his sermon to the modern world to recant, welcome doom, and allow the fauna of the planet to swallow us.

‘Palisade’ follows and feels like a natural bedfellow of ‘Chlorophyll’ – creating something both heavy and vengeful with something transcendent and glorious in tone and vision. We then transition into album closer ‘Oxygen’, the culmination of Photosynthesis, easily the best track on the record (and its longest, too). In this track the trio come together at their very tightest compositionally, instrumentally and vocally, almost embodying the metaphor process they have just covered for roughly half an hour. It is a triumphant end to a deeply intriguing and very rewarding atypical black metal listen.

Botanist have produced another fantastic album and with its brevity never lose the listener, despite the complexity of the music and dynamic shifts. This is down to some wonderfully creative songcraft and musicianship, as well as the aforementioned ‘levelling up’ of production on Photosynthesis. A fine record, verdant with energy and growth, and truly – forgive me – a breath of fresh air in a scene that can prove itself stale or frozen of life.