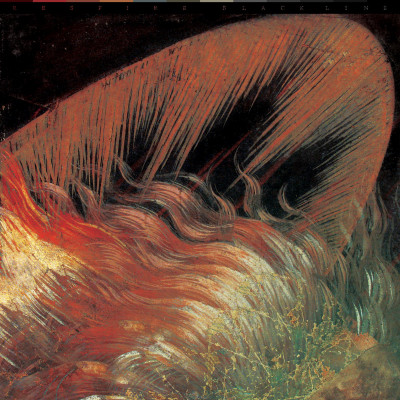 Days of Thunder was a favourite of mine growing up and one conversation came to mind as I listened to the latest Respire album. Nicole Kidman asks Tom Cruise what he enjoys about NASCAR racing to which he replies, “to know that I am control of something that’s out of control.” Welcome to the musical equivalent of that statement, Black Line is a ride on the edge, at times feeling chaotic yet never out of control. This is an exhilarating listen, manic and calm, quiet and loud, always moving, always threatening and unquestionably excellent.

The sense of mayhem is aided by the multi-faceted and talented members with strings, brass, drums, guitar, bass, piano and numerous vocal styles all compiling into genres such as screamo, post-hardcore, black metal, heck even death metal touches. ‘Cicatrice’ is the perfect example as it feels like a song having an identity crisis and a real battle of self to figure out what it is. If Godspeed You! Black Emperor woke up as a screamo band after dreaming that Fall of Efrafa became a black metal band wrapped in the passion and ferocity of Birds In Row and So Hideous, then only some of the ground on this phenomenal track would be covered. It scorches through black metal, rattles into a hardcore breakdown and then gang chants over orchestration before pummelling into blackened hardcore. It is absolutely sensational with so much movement nailed so coherently it is pure bliss; angry, angry bliss.

As if it wasn’t enough for Respire to tackle every genre under the heavy sun with aplomb, it even treads into some of their own. Two minutes into ‘Embers To End’ the band breaks into what I can only describe as swing-core. The brass and drums meander away from each other before falling back onto the same beat whilst the vocals chant in a fashion that would create the most euphoric most pit. ‘To Our Dead Friends’ reminds me of the early 2000’s emo/hardcore scene as screaming vocals mix with the emo-tinged clean vocals but as Respire do, these are both thrown through the music at the same time and the mind darts between both whilst surrounded by a whirlwind of intense drumming and strumming.

Describing all 41 minutes of this would be a thesis as there are so many nuances which go into each track. The one constant is that the start and end are never in the same place never mind genre, but the path is never muddied or unclear. The album is so beautifully balanced between the ferocious and the calm as interludes are used to transition but never overshadow the impact of the energy. Black Line has taken all the high points of pervious album Dénouement and turned them to 11. The sound quality of the recording has been beefed up, the instrumentation feels faster, louder and more urgent, the passion can be heard from every pore and the sweat can be felt dripping over every stroke of each instrument. This is a masterpiece and it is the kind of anger the world needs right now, thoughtful, planned and executed with 100% passion and focus. Black Line is a career best, a year best and will probably prove to be a decade best. The world has 9 years to try and top this and I look forward to hearing what it has to offer.