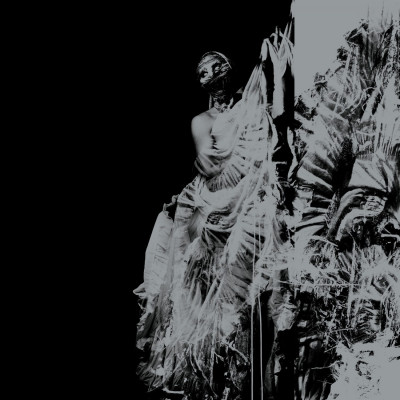 I consider myself fairly well versed in the multifaceted and myriad shapeshifting prism that is black metal in 2020, but I have to admit to having had a blind spot for Shaidar Logoth. This is the first time I have listened to them.

Their effort this year, Chapter III: The Void God, is, as you will have guessed, their third album and also completes a trilogy of thematically related records. This series began almost a decade ago, with Chapter I: The Peddler announcing their arrival in 2011 and the second part, Chapter II: The Ritualist landing in 2015. Both prior LPs featured four tracks and ran at roughly thirty and forty minutes respectively. The third chapter follows this structure and expansive trajectory; still a quartet of tracks, but now running longer at just under fifty minutes in length. This last fact being mostly down to the monstrous opening track of this infernal yet delightful opus – the monumental nineteen minute song, ‘Nest of Pigs’.

As a brief aside, I think it worth commending the two record labels putting this album out (Sentient Ruin in the USA and Cavsas [an imprint of the dark industrial Cyclic Law] in Europe). This album is coming out on an etched 2xLP. I am so utterly delighted with the vinyl boom (there’s nothing like a piece of vinyl – there just isn’t), but I’ve noticed a real trend in recent years, particularly among the death and black metal underground label community to release records of this length on single twelve inch LPs, despite both sides far exceeding the guiding light of the twenty minute mark. I want to own these records on vinyl, but damn, people… I want it to sound as good as it looks! I completely understand the pressures and costs associated with running a label – a 2xLP is a vastly more costly thing to produce – but it should still be done if one really wants the audiophile experience. I suppose the question is, were Shaidar Logoth worth the expenditure? The answer is very much yes. Yes, they are.

As previously mentioned, Shaidar Logoth’s new LP opens with the imperious, daunting ‘Nest of Pigs’. It opens slowly, mournfully, as the central character in their fiction transforms once again in ritual of a god, wishing to sculpt the world in their own design. It quickly becomes rather maddening to learn that the ‘band’ are actually just a two-piece – clearly two musicians with a jealousy-inducing overflow of talent. ‘Nest of Pigs’ warps from this arresting, beautiful opening into more familiar black metal territory, but executed with supreme skills and virtuosity. If one is a fan of bands such as Leviathan or Misþyrming who summon imagery of the occult and play with such wild abandon yet control, then it feels only right to suggest you check out Shaidar Logoth as soon as you can.

Having not listened to the duo prior to this review, it felt only right to delve into the previous two instalments of the trilogy. After all, how can one possibly comment on the third part of a trilogy of books if you don’t know the backstory and context to the events that happen in such a tale? There are a few things of note to take away when performing a comparison. The songcraft and musicianship is evident immediately from the very beginnings of the band’s recorded output, but this most recent LP is a cut above, a ‘levelling up’ for the duo. Secondly, while they certainly had a predilection towards some industrial, ambient and droning passages, these have firmly been incorporated into this album’s texture and tapestry, and perhaps points to quite why Cyclic Law became interested. The opening track closes it last few minutes in this fettle, occasionally enjoying bursts of noise and black metal fretting, before they become subsumed time and again by this unsettling audio void.

The centre of the album consists of two shorter tracks; ‘Anguish Cradle’ and ‘Consume Pieces of God’. The former, despite being the shorter, also features a noisy and dark ambient send off, but not before being a blistering burst of vitriol. However, it is ‘Consume Pieces of God’ that steals the limelight of the two, and quite frankly, the album and indeed entire trilogy. This seven-minute hellscape RIPS. With a far greater sense of groove than anything else the band have so far put to tape, the track is bountiful in its glorious riffs, venomous vocals and tunnelling, drilling drums. Certainly, one of my favourite tracks from 2020, for sure.

Chapter III: The Void God finishes with another lengthy track in the form of the sixteen minute ‘Withered on the Vine’. What is so impressive about Shaidar Logoth and this album is how it feels like such a cohesive piece of work, but also manages to showcase numerous different facets to their sound – and potential for the future. This final song goes through many movements as one might expect, but overall reminded me of the structure many of the best post-metal bands fashion over such time and movements. Blackened post-metal acts such as Dirge or Hope Drone would certainly be proud of such an involved and intricate track, such as this. It’s almost constant crescendo lends its close something reminiscent of euphoria, as the album slowly fades away, raging into the void as gentle, understated synths bolster the sense of ending.

Shaidar Logoth’s third LP is remarkably accomplished and, despite only housing four tracks, takes the listener on an epic journey not soon forgotten. Personally, I think they have now found their ideal album length – expansive enough to realise their full vision, without being overly bulky and unwieldy. The production on Chapter III: The Void God is also worthy of note; a subtle, well-judged blend of clean and rough production, employed at the right times to amplify technicality or add to the sombre, grim subject at hand. A very fine record from this impressive duo – I look forward to their next chapter.