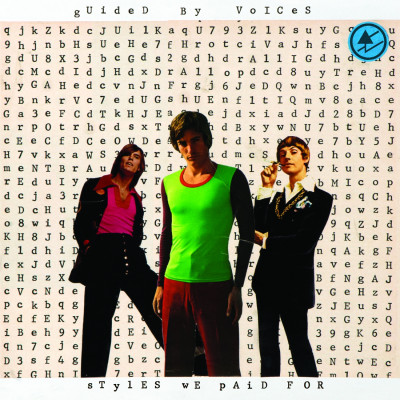 Styles We Paid For by Guided By Voices

Sure as you’re getting socks for Christmas, Uncle Bob and his indie rock elves have got another new album for you. Styles We Paid For is their third of 2020 no less. Oh, you thought a global pandemic was going to slow them down did you? No sir, no indeed. Guided By Voices‘ unstoppable creativity finds a way. Their first to be made since lockdown hit this new one was recorded by the band’s members in five different states. Not that you’d know it, it gels together perfectly. Always a band to find room for the ragged lo-fi scraps and half sketched ideas of their process you might have expected a little more of that stuff to show up here but, if anything, there’s less.

On the front cut out models strike poses in bold retro ensembles, suggesting Styles We Paid For refers to catalogue menswear. The central figure wears a vivid lime green top so clearly possessed of a hefty static charge that you can feel it in your teeth just by looking at him. He smoulders intently at us, his face in half shadow. Behind him his two friends seem more amused, affecting a casual dandyism. They stand before a background of letters, at first glance a word search but on closer inspection carefully designed to frustrate any such reading. It’s hard not to see this image as an act of knowing self deprecation.

No-one is really going to fall for the idea the titular styles are sartorial rather than musical. The GBV sound is still an unsentimentally repurposed collage of classic and underground rock moves chopped and arranged with greater care than first appears. There are echoes of the past and occasional borrowed moves but they always sound like themselves, they don’t do pastiche. Despite the rich kaleidoscope of sonic texture and detail buried in their songs their sense of rock ‘n’ pop history is worn lightly. They maintain their commitment to economy and melody.

The unique isolation in which it was made leaks in here and there. Originally imagined as an album called ‘Before Computers’ using less digital technology it has ended up using a fair amount more. The famously analogue Pollard seems ambivalent rather than outraged, ‘They Don’t Play The Drums Anymore’ turns over the possibilities of digital percussion and concludes with the repeated line “staring, staring at their screen savers.” His technological meditations continue on ‘Electronic Windows to Nowhere’ a standout largely on account of a glorious guitar part that seems charged with that 80’s mix of fear and wonder at a cold and gleaming future. Like all their best songs it’s over too soon.

The general feeling is bittersweet, the tempo is steady. It’s not exactly downbeat but it rarely gets excitable. Its one wild and discordant moment coming as ‘War Of The Devils’ drags itself through a vale of dread into a swarm of needling guitars that push it to a buzzing, crashing close. ‘Liquid Kid’ is a condensed epic that builds steadily eventually bursting into a triumphant fanfare that reminds you how uplifting they can be.

Overall the mood of the record is contemplative, looking back and mulling things over. Not so much in a nostalgic way but in that way we’ve all had a little more time this year to think about things. Final tune ‘When Growing Was Simple’ gets particularly wistful and leaves us with some holiday wisdom, “don’t drink and drive, stay at home and eat.”

Styles We Paid For is the latest album thrown on top of a particularly tall and tottering pile. Some of the production here is surprisingly polished and the vibe is a touch more sombre overall but it still sounds like Guided By Voices. It might not be a classic but it maintains their consistently high standard and current hyper productive streak. Stocking stuffing good.