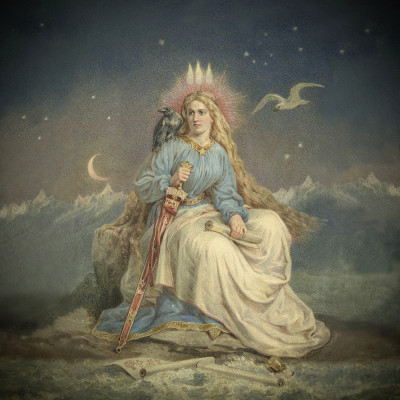 A new Sólstafir album is always a thing to behold. The mystical wonder of Iceland combined with a melting pot of musical influences, all filtered through a bunch of free-thinking musicians who do what the hell they like. The distinctive guitar tone, and the drive of the faster tracks and melancholy of the slower ones, in one way make Sólstafir’s sound unmistakable. But at the same time they never stick to a formula for song length or structure, so new material sounds fresh and unexpected. Endless Twilight of Codependent Love opens with a 10-minute track, ‘Akkeri’, which doesn’t feel that long at all – it just works. It builds from a sombre intro into a belter that just barrels along and lets the listener know that Sólstafir are back and as vibrant as ever.

Part of the appeal is the vocals of singer Aðalbjörn ‘Addi’ Tryggvason. Although Sólstafir have sung in English before, their recent albums have all been in Icelandic and this adds to the mystery. When you’re not listening to the words you hear the ‘shape’ of them instead: it melds with the feeling of the song. The voice becomes another instrument, one that conveys a huge range of emotion, from anger and pain to sadness. It’s this otherworldliness that for me creates Sólstafir’s mystique. I know that I’m writing this from the perspective of an English speaker who doesn’t understand Icelandic. Perhaps to an Icelandic listener Sólstafir sound as ordinary as Coldplay, but I really hope not. To me the lyrics, or shape of them, add to the wonder of the band, and are what captivated me with Otta. Those vocals tell you that you are not listening to an ordinary rock band. One song on Endless Twilight… is sung in English, the mournful ‘Her Fall From Grace’, about a woman struggling with metal health problems, and it stands out by its difference.

Sólstafir’s black metal roots are well in the past, and recent albums have been broadly post-rock and shoegaze-influenced. Black metal does rear its head on rager ‘Dionysus’, which Addi screams his way through, amidst frenetic drumming and passages of galloping guitars. Other highlights include ‘Drýsill’, a slow burner with a haunting intro, and the atmospheric ‘Rökkur’. Both these tracks are slow paced and mournful after the driving rock of ‘Akkeri’. At first this made the album quite difficult to get into. It took repeat plays over several weeks for this LP to get into my blood. Then I found myself humming one of the tunes, and I was in: Endless Twilight…revealed its secrets. It was worth the effort.

In sum, I wouldn’t say this new album was as good as Otta, but I would put it above Berdreyminn, which saw the band moving away from their metal roots and exploring lighter, more accessible material. Endless Twilight of Codependent Love is perhaps a combination of the two. The earnestness of Otta is apparent, although the sound isn’t as dark and as glowering as that classic. But the new album also opens itself up to new listeners by using a range of musical styles. Sólstafir remain a unique band, fascinating because of their Icelandic heritage, and who are continuing and develop their sound with every album. Embrace the endless twilight.