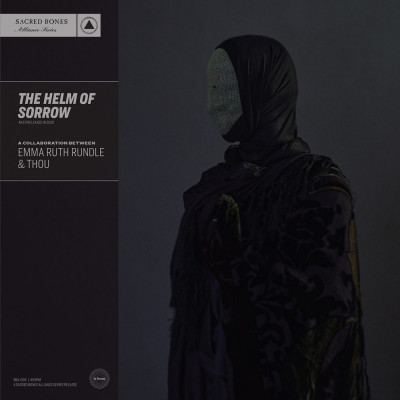 The Helm of Sorrow by Emma Ruth Rundle and Thou

Emma Ruth Rundle and Thou return less than three months after delivering one of my favourite albums of last year – May Our Chambers Be Full – with an accompanying EP, entitled The Helm of Sorrow. Three more tracks written during the same sessions that resulted in the aforementioned album, as well as a cover of ‘Hollywood’, originally by The Cranberries. If you bought the ‘die-hard’ edition of the record from Sacred Bones the two came together, but for those who missed out, they exist as two entities as well.

The release structure quite neatly serves as metaphor for how I view the EP alongside the album. Undoubtedly, they are of the same flesh and belong with one another and yet they also can live apart, enjoyed separately. It’s also particularly pleasing to note the attention to detail from all contributors involved to maintain the connection and artistry between each release, down to artwork (photography by Craig Mulachy), recording and the interplay of the title of each release: “the helm of sorrow” is a lyric from the first track of the LP, ‘Killing Floor’, whereas ‘may our chambers be full” appears as a broken line on ‘Crone Dance’, the second song on the EP. Nice.

It is immediately apparent upon first listen that the trio of original tracks that contribute to The Helm of Sorrow have blood that runs a little darker than its sonic sister. They are moodier, more ponderous in tone, reticent to allow light to blemish the shade they cast. While Emma Ruth Rundle has always served up restless, dark vibes on some of the tracks that comprise her back catalogue to date, and while it may be over-simplistic to state, it does feel like this EP is where Thou’s influence – certainly their sound to which we are most accustomed (Tyrant, Peasant, Summit, Heathen, Magus) – is felt more keenly.

On May Our Chambers Be Full, Thou brought their chameleon-like sonic personality to merge with Emma’s gorgeous dark post-folk (!), but certainly brought those elements we have heard more recently (acoustic, grunge, etc.) to the fore. And what a result that album was! Every track on that record has something to commend it, above much output from the majority of artists in 2020. On The Helm of Sorrow, not to be outdone, the dominant personality of the sludge/doom metal titans decides to enlace with Emma’s signature sound. The EP is equally successful in this aural hybridity, but it does mark it out as something more purposeful, capricious, darker…

‘Orphan Limbs’ opens the EP with vocals not from Emma, but from Emily McWilliams, frequent contributor to Thou’s vast canon [and the voice behind her solo project Silver Godling, which released the amazing Ravel last year, that you really ought to spend some time with]. This immediately puts the listener in a different head-space and it’s a strangely powerful five-minute track, creating a sense of unease that has kinship with the album, but feels deeper, more disturbed.

This carries on with the previously mentioned ‘Crone Dance’, another serving of darkness, with Emma sounding aching in many sense of the word – beautiful in her delivery, but sorrowful in tone and subject. The collaboration continues to hit the seamless high points of the LP, but there seems to be a true preoccupation on these tracks with the ache of burden, regret, and even the seemingly innocuous act of keeping static. Although sonically the group are serving up a sound very different to doom, the essence of the genre is exemplified on this EP, more so than on the album. The atmosphere created on this short release swallows the listener whole, enveloping you in its’ humors.

‘Recurrence’ is a towering track, with riffs to crumble cliffs. Despite being the ‘catchiest’ of the three original tracks on The Helm of Sorrow, it is no doubt the heaviest, with mountainous guitars and thundering drums crashing around Emma’s voice lost in the storm while Bryan Funck bellows ennui and transmits their groupthink existential loss into the void. A monumental song that may very well still be doing the rounds on ‘Best Songs of 2021’ lists in eleven months’ time.

We then close with the cover of Cranberries favourite ‘Hollywood’. They transform it – despite it being a relatively ‘straight’ cover – albeit one with distorted guitars and Funck bellowing “run away”. It puts me in mind of the Rick and Morty episode when said titular characters go to a spa and have their toxins, or rather their toxic personalities, literally removed. If one was to put The Cranberries recording of ‘Hollywood’ through the same machine, perhaps the end result, in the decaying, oozing, no-hope world of the toxin canister, would be this. It fits perfectly with the rest of the EP and somehow continues to convey the same very sombre, remorseless message.

Lines once written by Dolores O’Riordan as simple metaphor for how real relationships don’t really bear any of the hallmarks and sheen of those on Hollywood’s silver screen, mutate into something all the more atrophying, taking in huge swathes of other elements of life and putting them under the microscope and finding only sadness. A great track and another to add to the dizzying list of confusingly brilliant covers Thou have been involved in.

Overall, The Helm of Sorrow is a glorious extra from the minds of Emma Ruth Rundle and Thou. I’ve listened to it and May Our Chambers Be Full back to back many times; I have also reached for each separately plenty, too.

Would it be too greedy to hope they’re hiding even more? Yes, no doubt, is the honest answer. But one can dream… Although perhaps that’s just a little to “Hollywood,” come to think of it…