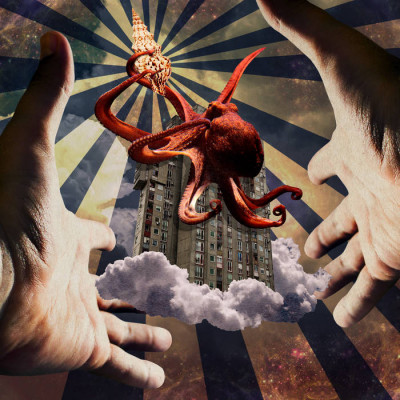 Instrumental three-piece Alpha Male Tea Party will be familiar to many on the math rock scene, they’re energetic live shows and sense of humour and fun is well known. People more familiar may also be aware that the band lost a great friend and mentor, Dan Wild-Beasley. Dan was a close friend of guitarist Tom Peters and a member of the band, Cleft.

Dan had a huge impact on the band and it is not surprising that his loss would have a significant affect on Tom and the band as a whole. Their fourth album, Infinity Stare, is consequently much darker and heavier than the band’s previous work. It is definitely Alpha Male Tea Party but there is more of an emotional depth to the music.

The opener ‘God U.N.I.T’ starts with a thick, chunky guitar and bass riff. Peter’s usual guitar flourishes are there and the track varies between quite angry and bouncy and almost positive sounding. The drums are strong and precise. The next track, ‘They’d Get the Guillotine’, despite the title, is a little more upbeat. A little longer than the average math rock track, Peter’s guitars are allowed space to experiment and to breathe a little. The use of synth adds a little ambiance to the quiet middle passage before the track explodes back into life.

‘Leather Diamond’ feels like the third part of a trilogy with the opening two tracks. The chemistry of the band really shows through on this track, they all bounce off each other with ease. ‘Locker Talk’ has a menacing feel to it, the bass and guitar mesh perfectly to give a chunky edge to the track. After a quiet interlude, the ending is monstrous.

After all the energetic noise and energy, ‘Year of Winter’ much more melancholic, a short track with swept arpeggios, strings and synths, it’s rather beautiful. We’re straight back to the chunky but sharp riffs and thick bass with ‘Desperate for an Atmosphere’, it changes feel during the tracks with an odd, slight off-kilter guitar and goes a bit off from there. The drums are sharp and precise. Listening to this album one standout is the quality of production, despite only being a three-piece the music is complex and multi-layered but each of the instruments are given light and space to breathe. The heaviness, in places, is tempered with some lighter parts and some synths. ‘Mild Language’ starts with a very AMTP-style jaunty riff, as in previous tracks the guitars are thick and heavy and the bass is amazing. It’s on tracks like this where it becomes apparent how talented the band are musically.

It’s always difficult to infer meaning from instrumental music and but various feelings come across of this album, anger, frustration and sometimes sadness, ‘Sad Balloon’ is one of those (I mean, the name kind of gives it away!). ‘Bonfire Disaster Movie’ and ‘Infinity Stare’ are far more hopeful and upbeat. Rarely, for the band, ‘Infinity Stare’ has vocals that give it a Pink Floyd feel to it. It’s a rather nice ending to the album.

Grief is one of those emotions that we all feel during our lives but affects all of us differently. Alpha Male Tea Party have used the pain and strong emotions they undoubtedly felt and ran with their emotions to create something that is familiar but different. Heavier than their previous work but also creative musically, mature and well-executed.