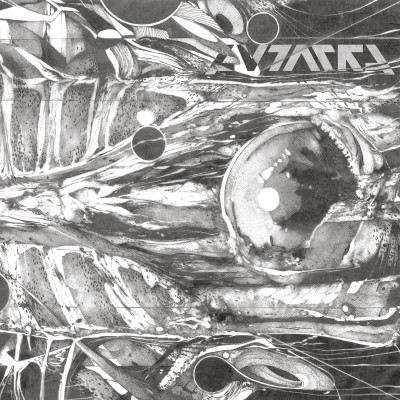 Form In Motion by Autarkh

April 2019 brought the tragic and untimely passing of Michiel Eikenaar, the imposing powerhouse vocalist of Dutch extremists Dodecahedron, who sadly lost his battle with cancer. His death was ultimately the closing chapter for Dodecahedron’s short but thrilling life and a dark day for metal. Fourteen months later they officially announced their disbanding and revealed their transformation into Autarkh, metamorphosing into another entity completely and exploring a new spectrum of demolishing sound.

The word ‘transformation’ was used in the post, making it clear that Autarkh is the proverbial phoenix rising from the ashes of Dodecahedron and built upon the skeletal foundations of the two masterpieces released under that name. Founding member Michel Nienhuis carries their sound into new dimensions under a new moniker and attitude. Joining him for pastures new are ex-Dodecahedron guitarist Joris Bonis, Extremities/Inferum guitarist David Luiten and DJ/producer Tijnn Verbruggen.

Extreme music has always dared to rebel and push the boundaries and preconceptions of what ‘extreme’ should sound like. Many bands have delved deep into that abyss already in search of new terrain to explore, with many coming back up reinvented. Electronic music is no stranger to being fused with the extreme metal genre, take Anaal Nathrakh for example, who have used this in their past few albums to great effect. When done right, the fusion of extreme metal and an unfamiliar genre can be a blissful listen, even if it take a few spins to get used to. For Autarkh’s debut album, Form In Motion, it only takes one glorious listen for every sound-bending nuance and crushing instrumentation to bleed uncontrollably into your brain.

The vibrating metallic bounce and glitchy nightmare-scape of instrumental opener ‘Primitive Constructs’ teases just a glimpse of the sound walls Autarkh plan to break down. ‘Turbulence’ wastes no time and smacks you down into a violent freefall of mechanised, unorthodox blastbeats and dissonant tremolos before breaking off into a bassy groove. The midway dual riff assault of high-flying angular and downtuned raging guitars over blasting beats proves to be one of Autarkh’s defining moments and one that draws you in utterly mesmerized. The track finishes with a glitch-heavy/old-school death metal fusion of ferocity leading to a maelstrom of dense, percussive terror.

The opening of ‘Lost To Sight’ evokes a little nostalgia with breathy, pitched-down GoldenEye-esque cymbal crashes. The rest of the track plays like a rhythmic pulse, with mostly slowed, chugging guitar strokes that progress into frenzied, warped blastbeats and buzzsaw riffage. The track finally melts away into a lengthy outro of slow heart-beats and dissonant, repetitive stringwork before disappearing into spacey ambience. ‘Clouded Aura’ is another fine example of Autarkh’s creative prowess and a vibrant aural onslaught of devastating blast sections, pummelling beats and chaotic riffs. Like most of the framework in their songs Autarkh leave plenty of room to breathe and develop, never quite sticking to conventional methods and throwing some curveballs in the mix, such as lighter proggy sections, allowing different layers of sound to take on life so the song can flow uniquely instead of stagnate.

There’s plenty to adore over this fantastic 47 minute debut. The instrumental tracks feel necessary and allow respite and recollection as well as flexing of talent, such as the smokey, experimental jazz-improv of ‘Impasse’ or the airy cosmic atmospheres created in the peaceful exploration of ‘Metacognition’. The guitar work is stunning, jarring and avant-garde with jagged riffs, as are the synthetic glitches and overall electro-wizardry coursing through the veins of the music. Michel Nienhuis is a commanding presence behind the mic, offering up a smorgasbord of throat candy, ranging from screams and guttural vitriol to cleaner harmonic vocals.

Drums are full of weight and echo IDM style beats but augmented to Autarkh’s reality, which cranks up their importance and adds a quaking feeling to the sound as if you are enclosed in circle of amplifiers turned up to 11. Blastbeats are used sparingly but to a godly effect with each padded, wild hit like a 250 BPM kick to the cranium. They have that ‘cyber grind’ feel to them reminiscent of The Berzerker, but doesn’t stray too far from the aesthetic of what made Dodecahedron such a devastating force.

Autarkh is Dodecahedron sent through the matrix at warp speed and splintered with fragments of futuristic audial violence, returning to reality with a biomechanical upgrade of sound. Form In Motion is a stunning debut and couldn’t be any more perfect for ears that appreciate the merging of genres and exploration of the hugely adaptable world of extreme metal. Autarkh come fully-formed with limitless musical possibilities and geared-up to scale the heights of extremity.