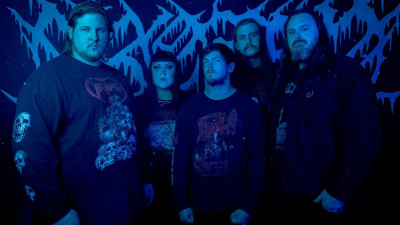 Recording was stressful because the world was starting to shut down as we were starting to record but we pulled it together and put together a record we are really proud of!

There has been an influx of new and hungry death metal bands over the past few years and you can definitely add the frost bitten death metal of Frozen Soul to that growing list. The Texas band have just released their debut album Crypt Of Ice and Gavin Brown caught up with the band’s vocalist Chad Green to hear all about the album as well as the band’s early days and influences and what else they have coming up this year.

E&D: Your new album Crypt Of Ice is out now. How did the creation and recording process of the album go?

Chad: It went very well but wasn’t without its hiccups! Overall we bounced ideas off each other and got in the zone, fleshed songs out and literally beat our ears to dust with them till we got them how we wanted them! Recording was stressful because the world was starting to shut down as we were starting to record but we pulled it together and put together a record we are really proud of!

E&D: Was the album all done pre-pandemic or did you have to adapt with changing procedures?

Chad: We wrote it pre and recorded it during.

E&D: Crypt Of Ice is your debut album, how exciting is it to unleash it on the world?

Chad: Very exciting, we all worked really hard on it so we’re happy it’s out!

E&D: Are you pleased with how Crypt Of Ice has been received so far?

Chad: Yes we were really pleased and surprised at how it’s unfolded!

E&D: Have you thought about any new material at all now that the album is out?

Chad: Yes, we are in the process of writing the new record now!

E&D: Was it fun creating and filming the videos for ‘Wraith Of Death’, ‘Encased In Ice’ and ‘Crypt Of Ice’?

Chad: We had a ton of fun! Brendan McGowen and Tanner McCardle are amazing dudes and our brothers for life!

E&D: You covered ‘Witches Coven’ by Mortician on your demo Encased In Ice. How big of an influence are Mortician on Frozen Soul?

Chad: Mortician has influenced us a lot, the whole reason we chug the way we do is because of them! I wouldn’t have a Mortician logo lower back tattoo if they weren’t a big influence!

E&D: Mortician are renowned for their use of horror film samples in their music. If Frozen Soul were going to use horror samples, what would you choose? I think The Thing would be awesome!

Chad: A lot of Hellraiser!!

E&D: Who else are the biggest influences on the sound of Frozen Soul?

E&D: What are your main memories of recording Encased In Ice?

Chad: Not know what we were doing haha!

E&D: How do you feel that Frozen Soul have evolved since Encased In Ice?

Chad: We’ve just figured out what we want to do, in the beginning we were so limited!

E&D: Have you got any plans for any live shows at the moment that you can tell us about? Hopefully you’ll make it across to the UK at some point this year!

Chad: At the moment nothing other than livestreams but we’re working on tours for the end of 2021 and into 2022. We will for sure get over there when we can!

E&D: You played one of your first big gigs with Necrot and Blood Incantation. How did that go?

Chad: It was a dream come true, those guys are so nice and talented and if it wasn’t for that show we for sure wouldn’t be here today!

E&D: What other gigs have been memorable for Frozen Soul so far?

Chad: Our show at Vitus with Steel Bearing Hand and Vomit Forth, house shows in Dallas that were packed and insane, and our last show with Obituary where we filmed the Encased In Ice live footage!

E&D: Do you feel that there has been a constant flow of quality death metal bands emerging over the past few years like yourselves, Necrot, Blood Incantation and so many others?

Chad: Yeah!! Death metal is blowing up again thanks to those bands and others like Creeping Death, Skeletal Remains, Undeath and a ton more!!

E&D: What other bands could you recommend for us to check out?

Chad: Kombat from Dallas, Defiled Crypt from Austin, and Plague Years from Detroit!

E&D: What are some of your favourite death metal albums of all time?

Chad: Mercenary by Bolt Thrower, and Shadows of the Past by Sentenced!

E&D: What was it like coming up as a metal band in Texas?

Chad: It was wild, we weren’t sure what we were doing but we had a lot of friends and family behind us!

E&D: Were extreme metal bands from Texas like Absu and Devourment an inspiration to you?

Chad: Devourment for sure, we love those guys!

E&D: How did you get into death metal in the first place and what does the music mean to you?

Chad: I got into it during high school, it’s a form of aggression that you don’t get from anything else so it means a lot to be able to channel that!

E&D: What are your hopes for Frozen Soul for the coming year?

Chad: Finish our next record and begin touring the world!!